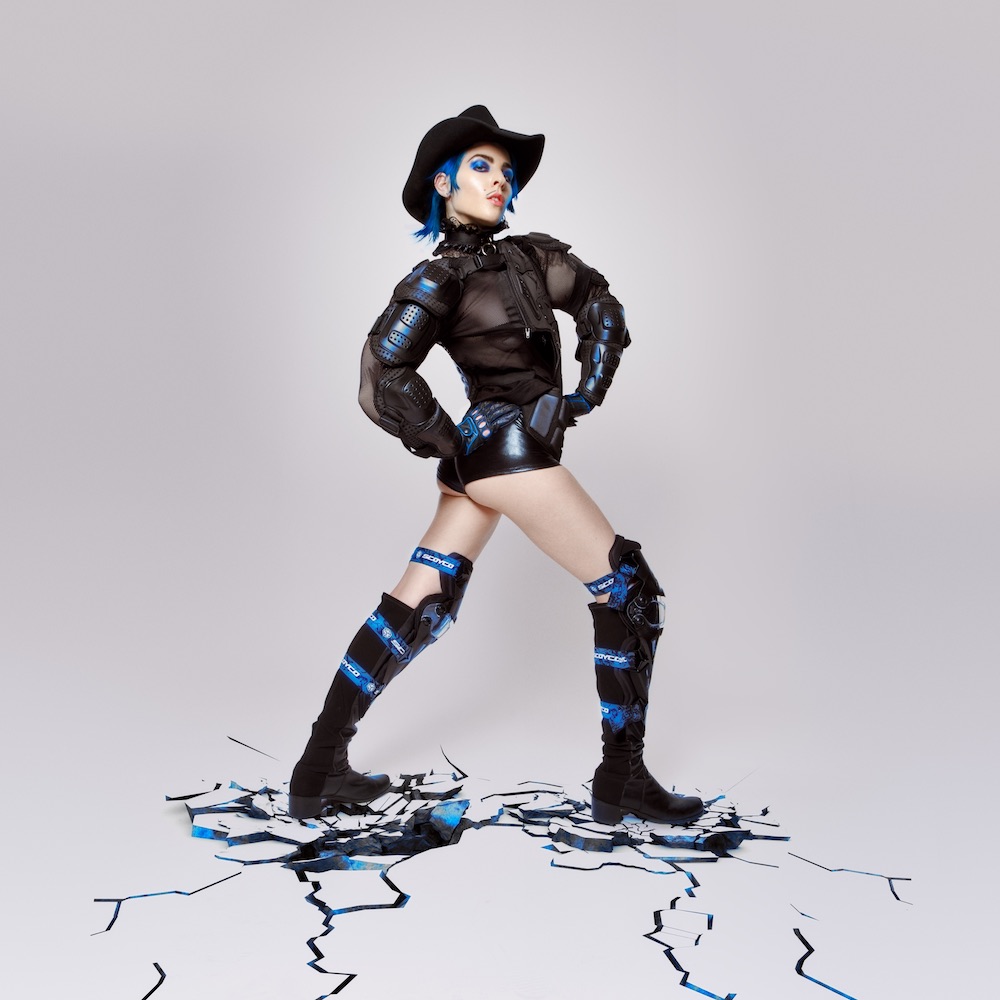 He’s an incredible camp figure in pop culture who skewers ideas of masculinity with a loud honk of “Groovy, baby,” in a male symbol necklace designed to invoke an erection. And what sort of campy person does one become when they watch and love this flamboyant example of manliness? Well, you become the person we’re really going to talk about: Dorian Electra, swaggering their way through their debut album tour – Flamboyant, already sold-out here in Austin – with a twinkle in their eyes (and their outfits) reminiscent of that same good quality camp Powers had.

Electra describes their own relationship to camp as something of “whimsical self-awareness,” brought on by growing up in Houston being both queer and raised by liberal parents (a descriptor which made them “political outsiders” in the Lone Star State). They intuit this knowledge that they were “somehow challenging the status quo in Texas” as contributing to “a deep understanding of camp” as being “outside the social norms.” Another part of their camp understanding also came from a youthful misunderstanding of cultural perceptions, including those of the International Man of Mystery himself. “I didn’t realize he was supposed to be really gross,” they reminisce. “I didn’t realize that a lot of the joke was like, ‘His teeth are bad and he’s so ridiculous that it’s funny that women are so attracted to him.’ I just thought oh, he’s an attractive guy and people like that … I think that [Austin Power’s style] deeply influenced me.” From this seed of hypermasculine dandyism sprouted other diva figures, like Oscar Wilde and Liberace, who similarly inspired Electra’s love for “anything that’s masculine but turned so much to the extreme that it becomes almost what people would traditionally consider feminine, just because it has so much attention to detail, [to] fashion.”

The title of Dorian Electra’s debut album, Flamboyant, is not just a mere statement of flashy clothes; it’s a call to be as splashy in one’s identity as possible, to be the brightest version of yourself.

Identifying as genderfluid (they refer to their often vibrant face paint as “genderless clown makeup”), Electra loves playing with extremely gendered concepts in order to find interesting frontiers for their art. Anyone who has streamed their album, or heard them perform live, can attest to Electra’s whimsical turns on oddities of macho masculinity, such as their wordplay in the song “Emasculate,” which begs the listener to “cut the man right out of me” as the singer is “too much man for my own good.” They delight in the journey of words, describing the process of unraveling concepts like emasculation from meaning literal castration to metaphorically “robbing a man of his masculinity” as something “emotionally compelling” for them. In essence, their approach to songwriting relies on narrative interest: “Once you have a story, there’s some meat to [the song].”

And what a story to tell. Electra weaves into their songs odes to pop gone mad with its own fantastical power. They revel in pop music’s eternal quest for “a world that’s beyond your everyday world,” something Electra considers a beacon for the queer community. “There’s something really liberating about being able to have this escape,” they explain, “but also [the] creation of some beautiful world in which all these other things are possible.”

Part of what’s possible in pop – for Electra in particular – is the deconstruction and reappropriation of masculine archetypes – office workers, daddies, and matadors – propelling them into queerer interpretations more relatable to the LGBTQ listener. While poking fun at these overwrought figures of virility, Electra’s aim is to also embrace these archetypes as something once held far from their grasp that’s now captured in their palms. “These symbols are so powerful … a matador or gladiator, all these things that have been traditionally used to mean violence and masculinity,” they elaborate. “I think taking that back and redefining it is just something that’s just so fascinating to me and so fun.”

Their album and tour title Flamboyant is not just a mere statement of flashy clothes; it’s a call to be as splashy in one’s identity as possible, to be the brightest version of yourself. Describing the word’s origins as “something bright and colorful that begs to be looked at like stained glass” to becoming “a coded word for gay ... used in a derogatory way,” their work is “about reclaiming [flamboyant] and making it a celebration again.” For Dorian Electra, flamboyance is a way of life and “all about unapologetic self-expression … taking delight in things that are purposefully over the top and dramatic … but also not being afraid to be ridiculous and be totally serious in how ridiculous you’re being.”

Dorian Electra will be performing on their sold-out Flamboyant tour at Mohawk on Monday, Sept. 23, at 8pm, with tickets still available for their Houston show on Sept. 24 (for now, at least). Stream their new album Flamboyant on Spotify, or wherever you get your groovy tunes, and follow their Instagram @dorianelectra for updates, such as their recent Minecraft concert.

Chaz Bono Is All About That Cult Life in Reboot Camp
Come and join us!

Fantasy Sex Toy Shop Strange Bedfellas Knows How to Relieve Your Stress
There be monsters ... and therein lies the fun