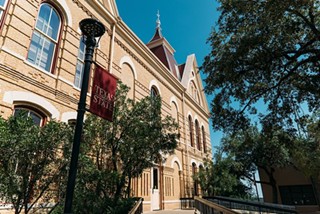 Texas State’s student government voted to impeach Student Body President Connor Clegg on Monday night, bringing to end a whirlwind five-day period at the San Marcos college. Clegg was found guilty of the six articles of impeachment brought against him, and was subsequently voted to be removed from office.

The saga surrounding Clegg actually began last November, when TSU senior Rudy Martinez penned an editorial in the student newspaper titled “Your DNA Is an Abomination.” Clegg called for the university to de-fund the publication in response, sparking the push toward impeachment. Soon after, student activists uncovered social media posts made by Clegg that were deemed racist and offensive by university President Denise Trauth, further motivating calls for removal.

Student government leaders were scheduled to hold an initial impeachment vote last week, but 19 student senators skipped out on the proceedings, preventing the student body from reaching quorum. The maneuver, which Clegg insisted he had no part in planning, prompted intense protest from student activists, including a sit-in at the school’s library. After a a few days, Dean of Students Margarita Arellano announced that another joint session of the student government would be held on the evening that the student government banquet was planned.

The impeachment vote was yet another swell in the tumultuous period that has roiled the Texas State campus for the past 18 months. Following the 2016 presidential election, posters and banners promoting white supremacist ideology began appearing on campus, sparking outrage and anxiety among the student body. For Texas State student Alissa Guerrero, who helped draft the articles of impeachment brought against Clegg, the student president’s tepid response to the racist incidents further galvanized the calls for impeachment. Guerrero said that Clegg had “proved numerous times that he does not represent the opinions of the students” at Texas State, and that the school needed someone in office who would do that. Although the impeachment is largely symbolic – a new student president was elected in February, and Clegg’s term will come to an end on Wednesday – student activists felt that the move sent an important message to the student body and university administrators. Emmy Orioha, president of the Pan African Action Committee, said that students had a “responsibility not to settle” for a president who does not “accurately represent the values espoused by the university.” He viewed the vote as “an opportunity for Texas State to set a precedent for what it truly cares about.”