Perry for Prez redux calls for a sojourn down memory lane 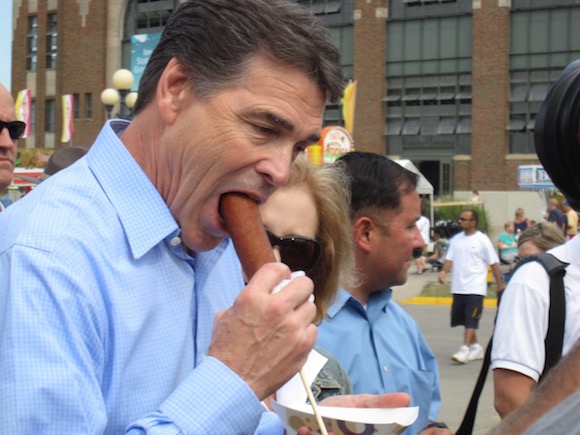 While his campaign jumped to correct Perry, clarifying he meant “incident,” the damage was done. For the nation, it was another “oops” moment; for Texans, it’s just classic Perry.

As Perry announced his second presidential run in early June – leading us to believe he just won’t go away (no matter how hard Texans will it) – in an airplane hangar north of Dallas, amid the backdrop of a country-rap song that made our ears bleed, he reminded America, “Our values come from God, not the government.” On that note, we’ve provided another helpful reminder of how terrible a Perry presidency would be by rounding up Gov. Goodhair’s Top 10 best – or shall we say worst – hits. Over the course of his 14 years as governor, Perry has left an indelible mark on the state, mostly for the worse. America: Don’t say you weren’t warned.

1) No Health Care for You: Unlike some flexible Republican governors, Perry’s refusal to expand Medicaid under the Affordable Care Act prevented more than 1 million Texans stuck in the “coverage gap” – those earning both too little to purchase their own private insurance and too much to meet Texas' bare-bones Medicaid requirements – from accessing health care. Texas continues to have the highest rate of uninsured residents in the nation.

2) The Grim Perry: More than 270 people were executed during Perry’s reign – a figure that exceeds any other state. And if that’s not bad enough, Perry is responsible for presiding over the deaths of mentally ill and possibly innocent inmates. Despite evidence showing death row inmate Cameron Todd Willingham’s likely innocence due to reliance on “junk science” in his conviction, Perry failed to grant a stay in 2004. When asked during his 2012 prez run if the possibility of killing an innocent man made it difficult for him to sleep at night, Perry responded, “No, sir, I’ve never struggled with that at all.”

3) Pay to Play: Perry’s governorship was marked by its altruism toward not the working class but wealthy campaign donors and their corporate interests. Major benefactors saw environmental and health regulations miraculously lifted after hefty sums were deposited into Perry’s coffers. Criticized for using it as his own personal piggy bank, Perry doled out millions – $222 million to be exact – from the Texas Enterprise Fund to companies that hadn’t even applied, according to a state audit. The name of the game in Perryland: crony capitalist quid-pro-quo.

4) Anti-Choice Crusader: Proclaiming he would make abortion “a thing of the past,” the anti-choice Texas guv gleefully supported passage of unprecedented cuts to women’s health care and family planning, as well as the state’s 24-hour pre-abortion sonogram law, and called a second special legislative session to pass package anti-abortion law, House Bill 2. To emphasize his profound respect for all women, in 2013 Perry vetoed a bipartisan-approved equal pay bill.

5) That Mug: Perry’s political payback schemes came back to haunt him in 2014, when a Travis County grand jury handed down two indictments against the former governor: abuse of power and coercion of a public servant for threatening to veto funding to the Public Integrity Unit unless Travis County District Attorney Rosemary Lehmberg, arrested for drunk driving, resigned. Perry has pleaded not guilty to both counts and efforts to quash the indictment have failed.

6) Prayin’ for Rain: An anti-Environmental Protection Agency climate change denier who vows to approve the Keystone XL pipeline if elected president, Perry stacked the state’s environmental regulatory board with buddies that dealt favors for corporate allies at the expense of the air and water quality. And in lieu of eco-conscious policy, Perry enlists the man upstairs to solve environmental woes: He once issued a proclamation calling on Texans to “join together in prayer” to end the drought.

7) Let’s [Not] Talk About Sex: When asked why Texas continually ranks as one of the states with the highest teen pregnancy rates in the nation, Perry responded, “Abstinence works.” When pressed again, the guv said, “I'm just gonna tell you from my own personal life, abstinence works.” Well, there you have it.

8) Champion of Inequality: Not a friend of the LGBTQ community, Perry once compared homosexuality to alcoholism. “I may have the genetic coding that I’m inclined to be an alcoholic, but I have the desire not to do that, and I look at the homosexual issue the same way,” he said in an interview last year. Perry supports gay “conversion therapy” and virulently opposes marriage equality. In a 2011 campaign video that elicited heavy criticism from progressives, Perry said there’s something “wrong” in this country when “gays can serve openly in the military but our kids can’t openly celebrate Christmas or pray in school.”

9) That Third Thing: In the most notable verbal gaffe of his failed 2012 presidential campaign, Perry forgot the third department he planned to abolish as leader of the free world during a televised debate. “Commerce, Education, and the – what's the third one there?" (The correct answer: "Energy.") The cringe-worthy “oops” moment revealed just how authentic Perry’s passion for his platform was and also served as a healthy reminder of what happens when you don’t memorize the script smarter people give you.

10) Parlor Tricks or Miracle?: Perry went state to state during his campaign touting the grand “Texas Miracle” – the state’s supposedly stellar financial boom due to free-market, conservative principles. However, economists swiftly broke down the numbers to discover job growth came in the form of low-wage employees, and pointed to the staggering number of residents who remain below the poverty line and without access to affordable health insurance and other social services. While Texas doesn’t have an income tax, it turns out the heavy burden falls on low-income families paying sales and property taxes higher than the national average.