Williamson, other parts of state upset with new lines 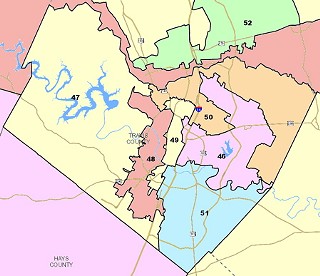 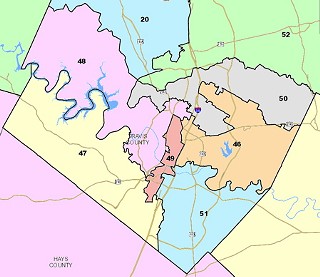 If adopted, the most noticeable changes would be in Districts 48 (Donna Howard) and 47 (Paul Workman). Currently, 48 comprises north Austin, West Lake Hills, and western Travis north of the Colorado River. District 47 take in southwest Austin and western Travis south of the river. Both districts have produced some nail-biter elections since being adopted in 2001 and have been represented by both Democrats and Republicans.

The new map (see right; click on the map to bring up a map of the current districts) presumably would take away some of that drama. By basically giving all of rural western Travis to Workman, the seat would become solidly Republican, and redrawing 48 almost entirely within Austin’s city limits would tilt it much more Democratic.

Howard says those lines came about through cooperation among the incumbents:

“Chairman Solomons actually asked counties like ours, that were wholly contained [no districts bleeding across county lines], to try to come up with a map that would have districts that we independently could determine were okay for us,” Howard says. Howard said Dist. 51 Rep. Eddie Rodriguez coordinated the Travis delegation's input.

Changes in other Travis County Districts were far less dramatic. “The proposed redistricting map for House District 46 needs a little tweaking but is not bad,” said Rep. Dawnna Dukes, who would lost a big chunk of rural east Travis but gain part of Pflugerville.

Folks in Williamson County were less pleased. Currently split into northern (Dist. 20) and southern (Dist. 52) halves, with Dist. 20 also including Milam County, Williamson would be divided three ways under Solomons’ plan, including a new Dist. 149 that would link Milam and Burnet counties in a barbell shape via a very thin strip running along the southern border of Wilco, meaning some Austin residents would be matched up with far-flung rural communities such as Cameron, Rockdale, and Burnet.

Williamson County Democratic Party Chair Brian Hamon told the House Redistricting Committee this afternoon that the district was “absurdly shaped” and said he preferred the Mexican American Legal Defense Fund proposal, which would link those counties via a much broader swath of northern (and more rural) northern Wilco.

In other parts of the state, reaction was negative, especially from minority groups and legislators.

"At first glance, there are districts with the proposed House map that would make Tom DeLay blush,” said Jessica Farrar, D-Houston, whose Dist. 148 would be substantially reshaped (but would not draw Farrar out of the district). She referred, of course, to the former U.S. House majority leader (and now convicted felon) who pushed the Legislature into an unprecedented mid-decade redistricting in 2003 to screw Democrats and increase GOP strength in Texas' Congressional delegation. “The map laid out today splits communities of interest and denies proper representation to people of color who drove the population growth in Texas for the past decade.”

The Texas Asian American Redistricting Initiative expressed “grave concern” with removal of the current Dist. 149, in the Houston area, currently represented by the Legislature’s only Vietnamese American, Hubert Vo.

“Removal of this district is unacceptable,” said TAARI director Rogene Gee Calvert, in a press release. “We are concerned that the Asian community of interest is split into five different districts under the initial plan, as has been the case for other Asian Towns thereby diluting their political strength and making accountability difficult to enforce.”

The TAARI even worried about Travis County, writing, “House Districts 47, 49, and 50 fracture the large Asian community along the northern border of the county substantially.”

All officially submitted redistricting proposals, whether written by legislators, interest groups, or individual citizens, may be view at http://gis1.tlc.state.tx.us/