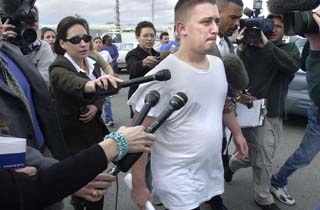 According to APD, Pierce ran a stop sign near Parmer Lane and McNeil Drive around 10:54p. After pulling over, officials say Pierce got out of the car and fled on foot. One officer -- Brad Smith, a rookie -- followed Pierce in a patrol car, while a second, five-year veteran Officer Frank Wilson, pursued Pierce on foot to the 12800 block of Carrera.

Wilson caught up with Pierce a short time later (near the intersection of Shreveport Dr. and Campos Dr.) and a "struggle ensued," said APD spokeswoman Anna Sabana. During the struggle, Wilson attempted to tase Pierce, and Pierce allegedly grabbed a knife from Wilson's duty belt and cut the officer's neck. Wilson was then able to draw his firearm, and shot Pierce. Pierce ran off and was found deceased nearby.

Wilson was taken to the hospital with a severed carotid artery among other injuries, but is expected to make a full recovery. At a Friday press conference, Asst. Chief David Carter credited quick action by back-up officers for saving Wilson's life. Both Wilson and Smith have been placed on administrative leave, as is standard procedure in an officer-involved shooting, while the department investigates the incident.

Pierce was one of four men charged in the grisly 1991 yogurt shop murders. At the time of the crime, the four were teens, as were the crime victims. He was jailed for four years before prosecutors finally dismissed the charges against him for a lack of evidence. Robert Springsteen and Michael Scott were both tried for the murders and convicted, but those cases were overturned on appeal. Last year District Attorney Rosemary Lehmberg dropped the charges against both men. A case was dropped against the fourth, Forrest Welborn, after two Travis Co. grand juries failed to indict him. Carter noted that the yogurt shop murders remain the subject of an open investigation.