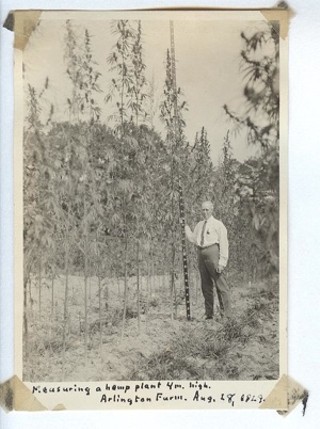 Lyster Dewey grew hemp at Arlington Farms, where the Pentagon now stands (by Courtesy of the Hemp Industries Association)

Hemp farming activists today will take a 50-pound bag of hemp seed to the office U.S. Attorney General Eric Holder, another attempt to impress officials that federal pot policy should distinguish between hemp and dope.

The protest comes on the third day of Hemp History Week, a series of events across the country coordinated by advocacy group Vote Hemp and the Hemp Industries Association to remind people that hemp has a long history in this country as an environmentally friendly crop used to make everything from fabric to car parts to paper, food, and body care products.

I've written much about hemp previously, so I won't rehash everything; suffice it to say that the Drug Enforcement Agency insists that the law does not differentiate between drug marijuana and agricultural hemp. Refusing to acknowledge the difference has led to a de facto ban on hemp cultivation despite growing interest of farmers to get back into the hemp business. Indeed, the hemp industry is growing, but all the hemp items sold in the U.S. must be made of imported hemp – brought from as close as Canada, and as far as China.

Nonetheless, there was a time, going back to the country's founding, when the U.S. government encouraged hemp production. In fact, Lyster Dewey, government botanist in charge of "fiber plant investigations" grew a huge hemp crop at Arlington Farms, the site of what is now the Pentagon.

Hemp advocates also hope to collect thousands of letters of support of renewing hemp agriculture in the U.S. that will soon be delivered to Holder's office. Check here for more on that. Download a postcard to send to Holder here.