Many assumed Elon Musk’s pricey bro-ification of Austin wouldn’t be good for local music, but few could have predicted something so emblematic so soon. Tesla intends to renovate longtime rehearsal space Music Lab at 500 E. St. Elmo into a showroom and service center, reported the Austin Business Journal last Thursday based on public records. In an email to the Chronicle, Music Lab secretary Joe Cabela now discloses plans to close the practice facility within 30 days. Tenants of the facility – popular for music lessons, hourly rooms, and long-term rentals – have been notified.

On the decision to sell, Cabela adds: “Vacated square footage and COVID, along with shut downs, gave us little choice.”

According to Cabela, after a major tenant moved out last March, he and brother/Music Lab President Dan Cabela, whose parents founded outdoor retailer Cabela’s, posted a portion of the building for lease. The 30,000-square-foot edifice is located within mixed-use South Austin development The Yard.

“Then we were given an unexpected opportunity,” writes Cabela. “The property was sold to GCH Saint Elmo LLC on Jan. 15, 2021. I have no information about Tesla beyond what has been reported by others in the media.”

On the decision to sell, he adds: “Vacated square footage and COVID, along with shut downs, gave us little choice.”

The news follows the 2019 shutter of Music Lab’s primary outpost on Oltorf, which opened in 1998 following their original 1992 launch at another location. Prior to closing the flagship, the business cut costs by decreasing hours and sale of their long-standing equipment rental department. As a separate entity, ATX Backline now operates out of Buda.

On future business plans, Cabela says there’s “nothing firmed up.”

When asked about the viability of running a rehearsal space in Austin, he replies, “I think it would be difficult within the city limits. Cost of construction and market rents make this difficult.” 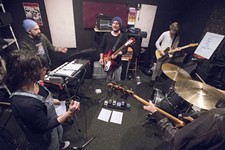