Cornell Iral Haynes, Jr. is 43 years old, an entrepreneur, investor, and father, but as Nelly, he never grew up. 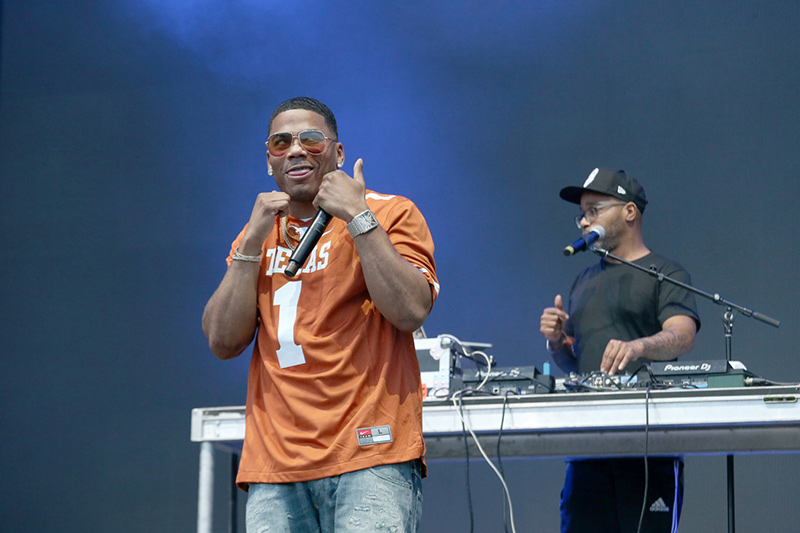 Because the Austin-born Missouri rapper hasn’t put out a hit for the last five years, it was surprising to see middle school-age girls bouncing their boxer braids eagerly up front. Perhaps that’s a marker of him aging out of some sort of market – that festival tweens know who he is. Regardless, other than some obvious work at the gym, he looks exactly the same as his Country Grammar days, celebrating UT’s football victory in a Longhorns jersey he stripped off at the end of his set.

After opening with the ubiquitous “Country Grammar,” “E. I.,” a random trap remix, and “Ride Wit Me,” 2013’s “Cruise” remix with Flo Rida brought the massive HomeAway stage audience back to this decade. In fact, the first half hour mostly moved through filler beats and remixes, the rapper’s DJ performing more than him. The crowd got restless before being buoyed by throwback “Rubber Band” and the classic wannabe stripper anthem “Hot in Herre.”

Tenth track in, “Dilemma” capitalized on becoming a now popular meme pointing out that Kelly Rowland is “texting” him on a spreadsheet in the music video. “Just a Dream” closed out the set as his last significant hit.

Nelly hasn’t outgrown his party boy brand despite reality show efforts as a family man and experimental album collaborations. It’s a safe bet, then, that his platinum-selling, eternally schoolyard rhymes will blast at house parties for generations to come. By the Time I Get to Phoenix
SXSW Grace Note: Glen Campbell at the Austin Rodeo.