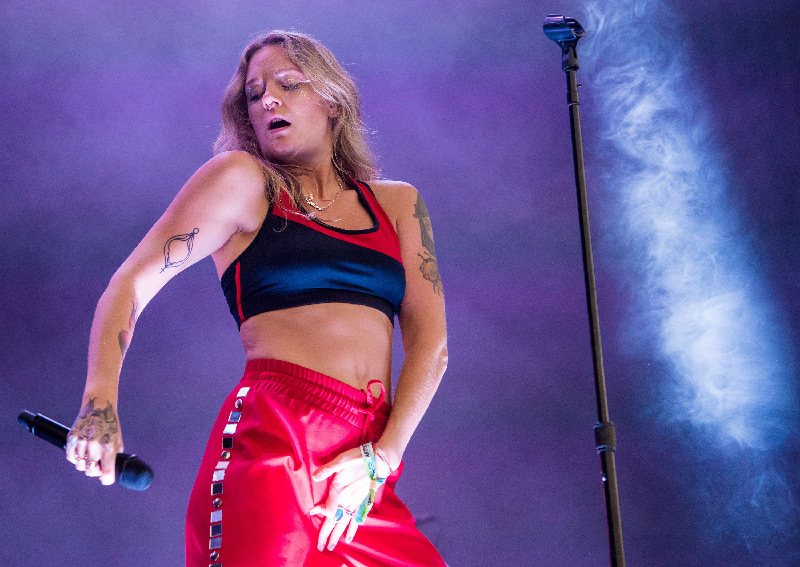 The dirty blonde diva’s sincere, perky soprano assured that her oft millennial, slang-infused lyrics were no joke, but rather demanding modern compositions. Phrasing riddled with “fly” and “as fuck” may be ephemeral, but it was exactly what a sing-along ACL audience wanted.

2014 smash “Talking Body” elicited a loving visit to the front row, as well as her first teasing, free-the-nipple flash. She prefaced scaled-back “Flashes” with an invitation to “get some feelings out,” while tossing light-up rings to the spanning assemblage.

The radio hitter committed to recent slick single “Disco Tits,” pinching her own on emblematic verse “I’m fully charged, nipples are hard, ready to go!” The finale revisited her international breakout with “Habits (Stay High),” whose last verse found the singer donating her sports bra to a screaming audience.

A few years from now at a sold-out stadium show somewhere, it’s easy to imagine mothers diving to shield their daughters’ eyes from Tove Lo’s topless farewell. If the Zilker crowd’s response is any indication, it doesn’t sound like such a bad pre-teen experience. There was something electrifying in the exposure.