During their monster set at the Honda stage early Sunday evening, Atlanta/Brooklyn rap duo Run the Jewels talked a lot in jest, especially when El-P went on about how difficult it is for a chubby man to wear a faded, black denim vest. That led Killer Mike to joke, “We wanna see your boobs and butt.” 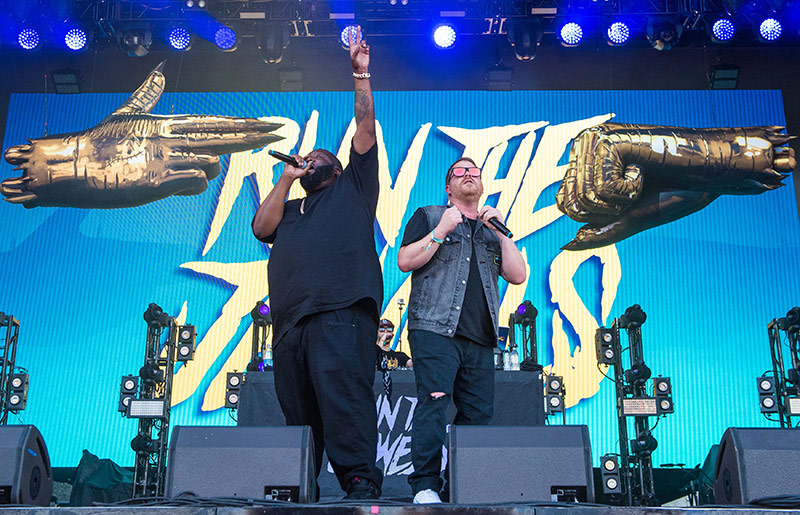 Make absolutely no mistake, however. The pair’s radical messages are deadly serious. On time and with no delay, El-P (Jaime Meline) spit a murderous flow slicing and dicing “Legend Has It.”

“I’ll pull a sword on you simps,
Just with a flick of the wrist.
Get your neck giving up mist.”

Gatling gun bass drums ran the entire set, and never more so than on the systemic corruption and poverty-themed “Don’t Get Captured,” where Mike raps:

“Go cold like the land of Chicago,
Child soldiers sprayin’ the chopper.
But you don’t give a fuck.
That’s them though.”

“Word architect, when I arch the tech,
I’ll part ya neck – got bars on deck.
That Xanax flow, make you nod your head.”

Early 20th century journalist H.L. Mencken said once that “every normal man must be tempted, at times, to spit on his hands, hoist the black flag, and begin slitting throats.” Run the Jewels, with front-facing grins and bloody ice picks behind their backs, are the proverbial black flag.

Mike (Michael Render) menaces on how much they care about your eternal damnation, shunting Satan off as some nobody:

“I ain’t here for durations,
I’m just taking vacations.
And tell him fuck him.
I never loved him and salutations.” 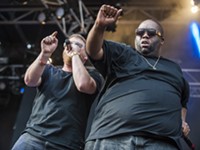 Run the Jewels
Sociopolitical messaging with a knowing smile