Friday’s Harvey Can’t Mess With Texas benefit concert and broadcast at the Frank Erwin Center proved a marvel less for its star power or even millions of dollars raised for the Rebuild Texas Fund, but in how quickly the production coalesced. Credit promoter C3 Presents, Willie Nelson, and Austin’s all-star wrangler and musical director Charlie Sexton. 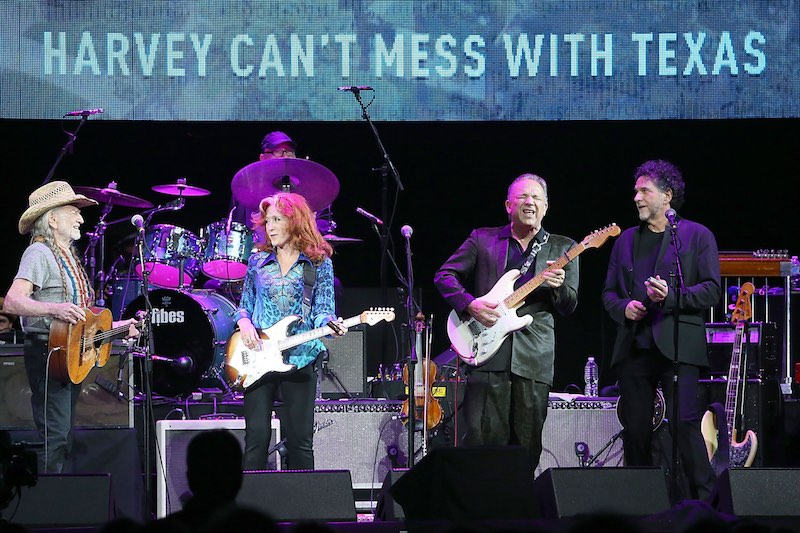 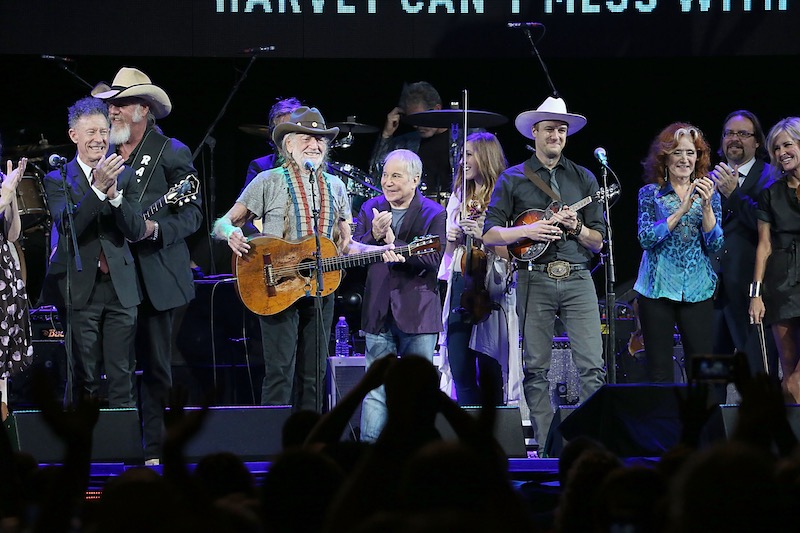 Less than a month after Hurricane Harvey made devastating landfall on the Gulf Coast, a dozen acts and numerous A-list guests convened for the largest benefit concert in Texas to aid the communities impacted by the storm. The show itself presented a nonstop roll call of unique performances and collaborations, four and a half hours split between the opening hourlong broadcast segment and the following individual sets for a sold-out arena.

Willie Nelson properly bookended the presentation, setting up the broadcast portion with “Whiskey River” as aided by Ryan Bingham, Nathaniel Rateliff, and backed by Asleep at the Wheel and Charlie Sexton. Exceptional moments ran fast and full from there, with Bonnie Raitt and Jimmie Vaughan coming off as nothing short of electrifying alongside Nelson for a fiery take on “Texas Flood,” and Leon Bridges offering smooth soul in a duet with the country icon on his “Funny How Time Slips Away.” Jimmy Buffett even dropped in a prerecorded message from Paris.

Young Latin-Americana sisters Ha’Ash, who’d just returned from Mexico City relief efforts, introduced themselves with stunning vocals, before James Taylor settled in with Sexton on “Country Road” and Raitt joined in for a Carly Simon-like harmony on “You Can Close Your Eyes.” Lyle Lovett brought an emotional pin-drop silence to the arena with the cello-backed “Simple Song.”

Paul Simon rounded the opening sets to a close with “America,” but a duet with his wife Edie Brickell on “Waltz Across Texas” offered the most charming moment. Nelson returned to lead the entire roster with the broadcast finale of “On the Road Again.”

The crowd barely caught its breath before the real show launched courtesy of Lovett and Asleep at the Wheel unloading “Blues for Dixie” and a rousing “That’s Right (You’re Not From Texas).” Leon Bridges prompted his own standing ovation by working through a quick three-pack of “River,” “Lisa Sawyer,” and “Coming Home,” the young Ft. Worth crooner having found his match in the exceptional side vocals of Brittni Jessie.

The younger artists on the lineup continued to generate an energy and celebration balancing the superstar gravitas, especially the return of Lake Charles duo Ha’Ash with a pair of their Latin pop hits and cover of Jewel’s “Foolish Games.” Ryan Bingham dug into older material from his tenure as a Texan, calling up help from Dixie Chick Martie Maguire, Austin R&B powerhouse Jai Malano, and Nelson’s harmonica stalwart Mickey Raphael for “Hard Times,” “The Weary Kind,” and “Hallelujah.”

Edie Brickell & the New Bohemians made their first Austin appearance in 17 years to offer “Circle,” perfect setup for the return of Raitt and Vaughan on saucy blues teaming “The Pleasure’s All Mine.” Raitt walked away with an emotional high point by adding Ruthie Foster and Maguire for three-part harmonies on “Angel From Montgomery.” Hard act to follow, but Taylor tried mightily in corralling Asleep at the Wheel on “Sweet Baby James,” Sexton for “Up on the Roof,” and Foster, Raitt, and Malano to lead a powerful rendition of “Wasn’t That a Mighty Storm.”

Nathaniel Rateliff & the Night Sweats surprised with a brilliant late set of gritty soul, howling the indie outfit’s “S.O.B.” and “I Need Never Get Old” prior to Raitt joining in for a cathartic rip on Leon Russell’s “Delta Lady.” Tex-Mex legend Little Joe y La Familia then snuck in a quick late addition of Tejano soul.

Paul Simon’s return was notably looser than his earlier appearance, endearing as he punched out “The Boxer” with Maguire on fiddle, and called on Brickell to whistle a verse of “Me and Julio Down by the Schoolyard.” The couple then offered another country pleaser with Wheel backing, entwining voices on Loretta Lynn and Conway Twitty’s “You’re the Reason Our Kids Are Ugly.”

Willie Nelson closed with a rapid romp rolled in mortality, breathlessly hitting “Still Not Dead,” “Still Is Still Moving,” and tributes to Waylon Jennings and Merle Haggard, respectively, on “Good Hearted Woman” and “It’s all Going to Pot.” “Roll Me Up” offered a final pass before the evening’s artists and celebrities joined to carry “I’ll Fly Away.”

If the ending felt predictable, its execution was stunning. Texas can always count on Willie Nelson.