On Thursday morning, Mayor Steve Adler took to the dais and announced plans to utilize a new mini-bond program to preserve local live music venues. His hope is to crowd-source a $10 million fund and use it to purchase select properties, protecting them from the rent increases we’ve seen plague Austin clubs in recent years. 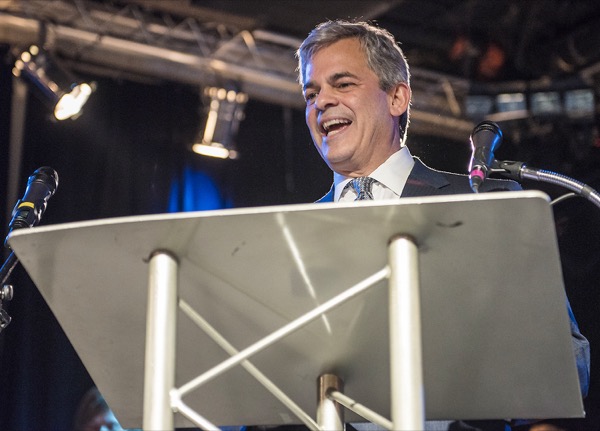 The proposal comes as a result of Austin being named one of five cities to win assistance from public finance company Neighborly. The San Francisco-based online investment endeavor sought for its Neighborly Bond Challenge to engage municipal agencies interested in offering their communities investment opportunities in local projects. Austin winning essentially means it gets to use Neighborly’s bond-selling platform for free.

Adler noted that the campaign includes technical, legal, administrative, and marketing services. Mini-bonds are a form of financing that allows companies or public entities to source-fund through a diverse array of investors instead of borrowing from banks. Investors receive regular interest payments.

The mayor called the concept of applying the model to saving music venues “a creative solution for the creative class.” He also stressed that the project comes at no risk to taxpayers, nor is it funded by the government.

“This is going to give us in Austin the support and opportunity to try something that’s never been tried anywhere else,” he said.

Shortly after the announcement, “Playback” sat down with Adler’s Communications Director Jason Stanford to discuss how the mini-bonds will work toward preserving Austin’s live music destinations.

Austin Chronicle: Explain specifically how this program can be applied to venues?

Jason Stanford: The mayor would want me to point out that the details haven’t been worked out yet. We still have to figure out how it’s going to be guaranteed, how much each bond is going to cost, and what the return is going to be.

Say you’re going to buy one of these bonds for $500. The market has a certain return on bonds. This one will probably be less because it’s what’s called a socially responsible investment. Meaning you’re doing it for not just the money, but rather to achieve a certain policy outcome.

In this case, it’s to preserve music venues.

One way it’s been suggested it could work is to buy these properties and hold them in a land trust. In effect, it would be a lot like permanently affordable housing. The value of the land would be kept artificially low by the owner, which would be this bond, so the rent wouldn’t keep going up, and these guys wouldn’t be forced out of business.

AC: At the time this might be put into application, how are you going to let the public know? Are you going to issue an announcement saying, “Help us buy the Hole in the Wall?”

It’s a pretty safe investment. It’s not wildly speculative. So when you buy the bond, you won’t be buying for a specific club. You’ll be buying for the cause. This will create an investment vehicle that will find the best way to preserve the affordability of these music venues.

Now they might not buy them. They might be co-investing – all those details haven’t been worked out – but the goal is permanent affordability for music venues. Not all of them, certain ones, so there’s going to be choices that have to be made.

AC: Will your office make those decisions?

JS: No, the mayor’s not going to be sitting around saying “White Horse, but not Barracuda!” It’s going to be some sort of board, a group of people who are qualified to make these decisions in a professional way. There might be people in government on the board, but it won’t be a government board. It’ll be a board administering this bond.

So we’re going to have to figure out who chooses which music venues to get it. This is intended to preserve our iconic venues: Broken Spoke comes to mind, Hole in the Wall is always going out of business, back in the day the Armadillo World Headquarters would have been the thing that we’d want to preserve. Liberty Lunch is obviously a different case because it was city owned.

This creates an investment vehicle and then there would be a process to determine which of the music clubs we can’t afford to lose.

AC: Is there any sense right now of when this could be established?

AC: Do you know of any other municipalities using this in a music capacity?

JS: No, I don’t know of any other cities that have mini-bond programs, but usually they were parts of big municipal bonds. You know, how we have the big $720 million mobility bond coming up. Most cities have used this mini-bond idea to say, “You can invest in this big bond,” not as part of the election, but as they periodically sell bonds.

Denver said, “Okay we have $12 million to sell, we’re going to reserve $1 million of that so regular folks – the people of Denver, instead of Wall Street – can buy it.” It sold out in less than an hour. This is the first time it’s been done for something this cool.

Save Our Spaces March: "Give Us the Keys!"
Creative Alliance leads artists on a second line down Second