The healthy-sized crowd inside Grizzly Hall roared as LeBron James made history Sunday night, leading the Cleveland Cavaliers to their first NBA championship with a 93-89 victory over the Golden State Warriors in Game 7 of the NBA Finals. Wheeler Walker, Jr. took a moment to reverently address James’ legendary performance when he ambled onstage.

“Now we know who the greatest basketball player in the world is, and who the greatest country singer in the world is – all in the same fucking night,” yelled the axe-slinging, hat-wearing, profanity-hurling country singer in his Lexington, Kentucky, drawl to waves of applause from the heavily inebriated crowd. “I’m the LeBron James of country fucking music and y’all fucking know it.”

Then he proceeded to play a song called “Beer, Weed, Cooches.” 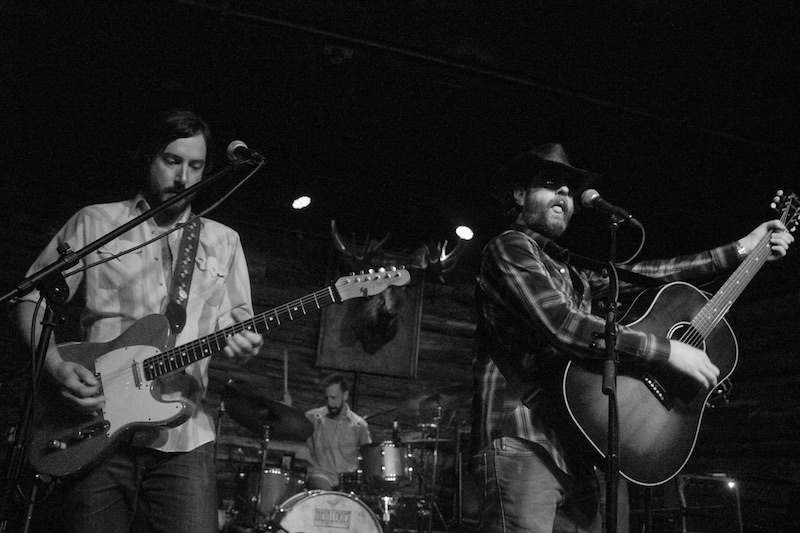 In February, Walker – alter ego of stand-up comic Ben Hoffman – released his debut album, Redneck Shit, an exhaustingly offensive collection dealing with heartbreak (“Fuck You Bitch”), loneliness (“Better Off Beatin’ Off”), and TGIF (“Eatin’ Pussy/Kickin’ Ass”). Heinous though the 11 titles are, the tunes themselves are chicken-fried country jams that hearken the genre’s outlaw movement. Imagine Steel Panther with slide guitars and cowboy hats.

Walker played every track off Redneck Shit and then some during his 15-song set, including a countrified version of Rihanna’s “Bitch Better Have My Money.” For the most part, he remained firmly rooted behind the microphone, delivering faithful renditions of his songs and only leaving his post to mosey up to his bandmates during solos. He took every opportunity between songs to praise the audience – and take shots at another.

“We were in Houston last night, so it’s nice to be back in civilization,” he offered. “I love Austin as much as I hate Houston.”

This came as no surprise since the singer once tweeted that he used the Houston Press as a “jerk rag” after they published a scathing review of his album. They’ve since made up. Sort of.

The audience hooted and hollered at Walker all night, passing him beers and shots, which he declined. Though the target demographic was clearly men in their mid-30s, there were plenty of women present; one young lady at the front of the stage smiled sheepishly as Walker played a new song titled “Drunk Sluts.” Another couple slow-danced to “Fuck You Bitch,” spurred on by the cheers of their fellow concertgoers.

After a spirited, crowd-assisted rendition of “Drop ’Em Out,” which boasts the most tender lyric on the album (“Come on, let me gander at your boobs”), Walker and his band retreated from the stage, prompting the audience to chant, “Wheeler! Wheeler!” When shouted loudly enough, it sounds remarkably similar to “Freebird!” This probably isn’t a coincidence.

The band soon returned, Walker busting into “La Grange”-inspired rocker “Eatin’ Pussy/Kickin’ Ass.” A man with a white cowboy hat and a carnal grin pointed at his friend as he sung along, as if to say, “Yes! This song is totally about me!”

Walker, for his part, issued a warning before his last song.

“Don’t any of y’all bring your fucking dicks for me to sign. That’s a lesson I learned in Houston.”

Then he closed out the night with “Which One O’ You Queers Gonna Suck My Dick?”