Addressing music and arts survival in this “affordability crisis”

Mayor Steve Adler rolled out an array of resolutions this morning to stimulate Austin’s music economy and support the extant ecosystem in times when affordability is of increasing concern in creative sectors. It’s the most substantial music and arts related action Adler’s made since taking office over a year ago. 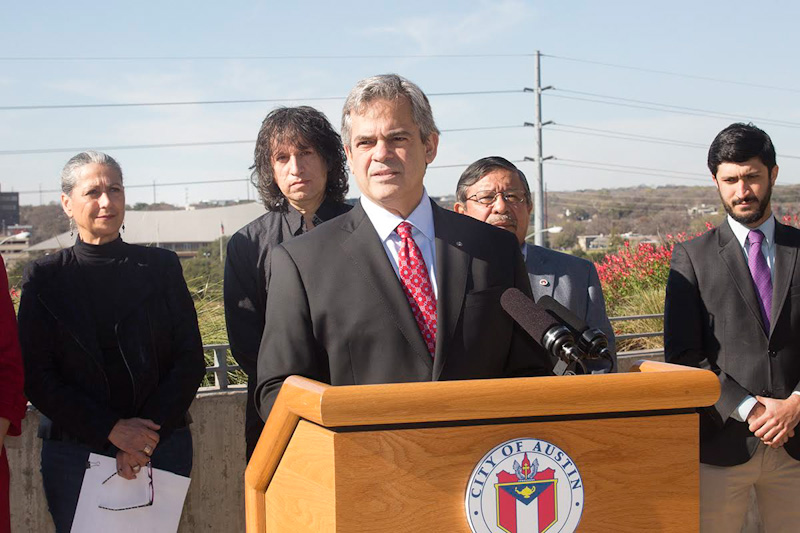 “We don’t need a study to tell us that Austin’s local music industry has suffered under the affordability crisis or that creatives or artists in this city, like so many, are suffering, but the news that we had lost 1,200 jobs in the music industry since 2010 was sobering,” said Adler at a City Hall press conference Friday morning.

The extensive package of policy proposals, titled Austin Music and Creative Ecosystem Omnibus Resolution, emphasizes preservation of existing venues and generating growth in the music and arts sector. Specifically, it lays out plans to help musicians by adding a gratuity line for performers on bar tabs and aid venues by including the “Agent of Change Principal” into the upcoming revision of Austin’s land development code, meaning whichever party changes the circumstances of a venue becomes responsible for managing their civil and community impact.

The proposal also called for a multi-departmental strike team dedicated to driving music tourism, and streamlining the regulatory processes for venues by combining multiple annual permits and fees into a single process. One of Adler’s stated goals is for the City’s Music Office to take a greater role in the sector’s economic development while letting Code Enforcement handle sound issues. The Music Office would focus on strategic planning, advocacy, and policy and community relations under his plan.

The affordability of creative spaces, such as studios and venues, stands as a paramount issue in 2016. In that, today’s resolutions addressed the potential for creating a music “hub,” where various resources and services are under one roof. Similarly, the policy’s goals also include a look at developing “clusters” of creative businesses.

The mayor’s packet of resolutions directs City Manager Marc Ott to return to the City Council Economic Opportunity Committee within 90 days for a plan of action.

“We’re going to need all our creativity, ingenuity, and our vision to deal with the crises that face our musicians and artists alike, who are being priced out of their homes, their studio space, out of their performing venues, out of their presenting venues,” said Adler out front of a horde of council members and representatives from the music and arts communities standing. “The work they’re producing is as vibrant as ever, but this city has never been more unaffordable to them. And what do we ultimately gain if we have another weekend of ACL Festival, but we continue to lose all our Liberty Lunches?”