Friday morning of ACL Fest week two arrived in perfect jean jacket weather. And yet, the minute you got down off a festival shuttle bus, every degree of heat in Austin concentrated itself directly on Zilker Park. Black Pistol Fire just about shocked the heat index into the 100s. 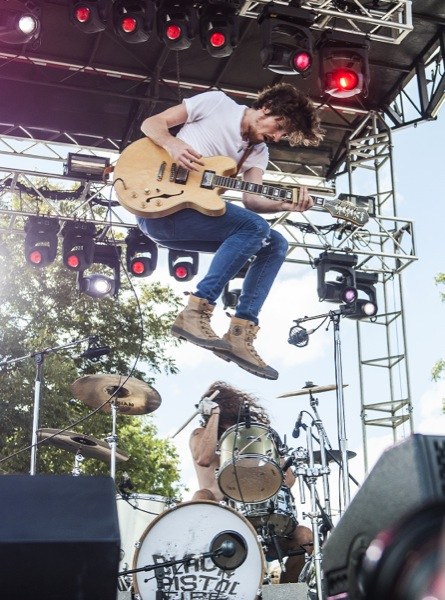 McKeown’s also not afraid to toy with the most archaic of Seventies effects pedals – the phase shifter – occasionally adding swooshing textures to the overall sonic tapestry. Here’s a duo experimenting with silence and instrumental drop-outs as well. The word “dynamics” figures prominently into the Austinites’ vocabulary.

Of their highly listenable Hush or Howl, “Run Rabbit Run” set off an obvious highlight. All of the tunes bracing the set found McKeown stomping around like he was in the grip of the happiest tantrum ever. Owen, meanwhile, mistreated his kit like Animal from the Muppets.

The guitarist gave his visiting Canadian father a 60-second birthday shout-out and eventually leaped the audience barrier – diving into the crowd. Once there, he led the gathering throng in a guitar hoedown, eventually mounting one lucky buck on his shoulders à la Angus Young.

Black Pistol Fire leaned more towards Howl than Hush this day. And with it, they owned the audience.