Though heartening to see so many kids crowding the front of the Samsung Galaxy stage, these teens and twentysomethings weren’t really there for Spanish Gold. They were staking out their early spots for the headliner, Eminem. They were rewarded with a particularly rocking set nonetheless.

Opening with “One Track Mind,” the sextet – Dante Schwebel (Hacienda), Patrick Hallahan (My Morning Jacket), Austin’s Adrian Quesada (formerly Grupo Fantasma; presently Brownout and too many others to list), plus local bassist John Branch (Hard Proof, Golden Dawn Arkestra), and a pair of Nashville back-up singers – served immediate notice this mainstage performance would be a higher volume experience than May sleeper South of Nowhere and its psychedelic, Tex-Mex soul. 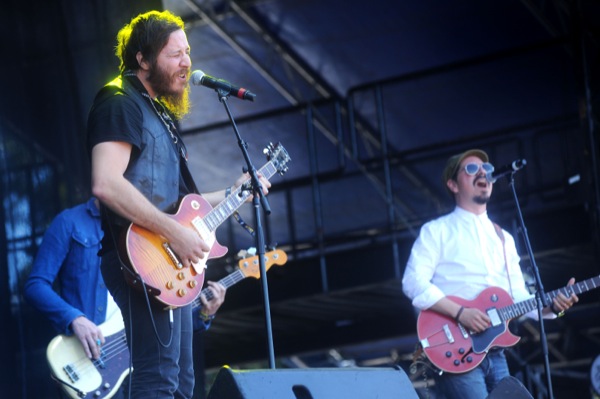 “Movin On” led with garage thump, “Stay With Me” augmented its balladry with an epic guitar solo, and “Day Drinkin” grunged a groove with enough fuzz to choke a clothes dryer. The sinews of rock muscle meshed with the soul sonics driving “Ride On Up” and “Lonely Ride,” with Hallahan doing his best “Funky Drummer” imitation during the roaring “Reach For Me” and “Out On the Street.”

The Louisvillian emerged as Spanish Gold’s secret weapon, his polyrhythmic mastery lifting “South of Nowhere” and “Don’t Leave Me Dry” above the level of mere garage rock. Underscoring the point, the band ended its set with back-to-back R&B covers: Don Covay’s Rolling Stones-covered “Mercy Mercy” and, as an admitted sop to the Eminem fans up front, a scorching take on Bell Biv DeVoe’s “Poison.”

The kids were there for Detroit’s deffest, but at least some of them came away digging Spanish Gold.