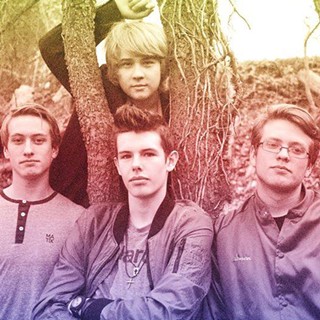 Austin’s Painted Redstarts, led by second-generation rockers William Harries Graham and Marlon Sexton, step back in time with a video for their forthcoming single “Curtains Wide,” bearing all the hallmarks of a late-Eighties MTV clip.

“Obviously two members of the Painted Redstarts have rock star dads and around the late Eighties both Jon Dee Graham and Charlie Sexton made appearances on MTV’s 120 minutes along with a lot of other arty VHS stuff,” says Marslett. “I loved watching the show when I was a kid and discovered lots of cool bands on there. All that was rolling around in my head.

“I thought, ‘Wouldn’t it bee cool to go back and discover bands the way we used to? Wouldn’t it be cool to discover William’s band by turning on 120 minutes at 11pm and seeing them for the first time with all the other viewers?’ I tried to recreate that feeling with this video as accurately as I could.”

“Curtains Wide” the single arrives on Tuesday via Austin imprint Playing in Traffic. The label represents local faves Los Lonely Boys and Speak, and serves as management for Ben Kweller. When he signed the 15-year-old Graham earlier this year, owner Kevin Wommack told the Chronicle, “William’s creativity, ability to move mountains, and inspire at his age only leads to bigger, stronger, and greater things to come. I wanted to be on his train rolling down that musical track.”

"Curtains Wide" by The Painted Redstarts from Geoff Marslett on Vimeo.