Updating the closure of Momo's

It’s appropriate Suzanna Choffel was the last act to play Momo’s. It had become her home base even before she began dating Paul Oveisi, the owner. She played there Christmas Eve, a Saturday, and at the time nobody knew it was the final show because the venue was closed for the holiday. Then came an announcement that the next day’s shows were canceled.

Tuesday, December 27, it was decided that the venue, located on the second floor of the building at Sixth and Rio Grande, wouldn’t be able to continue due to structural damage. What was lost was more than just another music venue.

A couple of weeks ago at Antone’s, a benefit was held for Momo's employees who were suddenly out of work. The benefit was also a chance for the musicians who frequented the club to gather and support each other – to perform – and maybe even get drunk.

T Bird & the Breaks were a highlight that night. Tim Crane explained that Momo’s was the first Austin stage his band ever played. I’m sure there are more than a few local acts that could say the same. Over its 10 years, Momo’s became a place that welcomed and nurtured raw local talent. Besides Choffel, the Band of Heathens, Hayes Carll, and Los Lonely Boys all spent some of their early days there.

Momo's was a place that an act could build an audience, where the South Austin Jug Band could pack them in every Sunday night and then, after they broke up, where the Jug Band’s ex-fiddler, Warren Hood, could do the same. It was a comfortable and welcoming room, and although there’s talk of relocating, just replacing that outside deck would be tremendously difficult.

I spoke to Oveisi this week about the status of the club. He acknowledged those locals that are hopeful Momo's might be revived at a different location, but admitted it’s not a priority for him at the moment. He’s recently moved to Brooklyn and his new job at the Hill Country Barbeque, a restaurant and music venue in Manhattan, is taking up all his time.

“They’re growing so fast, I haven’t had time to clip my toenails,” he says. “I will be doing something else in Austin. I don’t know what or where or when, but it will be in the spirit of Momo’s. I don’t know that I will call it Momo’s. I think about all the legendary places that have closed in Austin and they never quite got what it was when they try to resurrect it. It’s not exactly easy to drive down South Lamar and scout out a location from 1,500 miles away.

“I’m having a growing experience here in New York and it’ll be a couple of years, but ultimately Austin will be the beneficiary of that. You could call me tomorrow and I’d give you a different answer. I’m all over the map right now. I hope to have something by summer, maybe sooner.”

In Momo's absence, I’ve been trying some of the new venues written about in this week's cover story. I’ve been to the Rattle Inn, the White Horse, and the Gypsy Lounge once each. They all have positive aspects, but whether they or any other club will replace the camaraderie and joy of music making that Momo’s provided is on a wait and see basis.

One thing that isn't in doubt, of course, is that the local music scene will continue to thrive. It's a living entity that will grow in ways that are unpredictable and bold, just minus a club that surprised many with its vitality and influence. 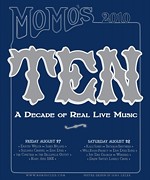 Westway to the World
Momo's celebrates a decade on Sixth