The Best Imitation of Myself

Chatting with Ben Folds about his new box set 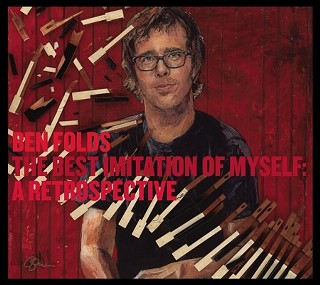 He’s only 45 so it seems a little early for a Ben Folds box set. But the North Carolina-born pianist has always been one for doing the unexpected, whether it’s working with William Shatner, Nick Hornby, and Regina Spektor, composing music for film soundtracks, or serving as a judge on NBC’s talent competition The Sing-off.

Now comes The Best Imitation of Myself: A Retrospective, with over 60 tracks from the past 20 years. Its three discs are broken down into one best-of, one live, and a rarities CD that includes three new songs from the original Ben Folds Five trio. We talked.

Ben Folds: It was more my idea probably, but it sort of evolved. I'd been resisting the ‘best-of’ record for as long as I was going to be able to hold out.

BF: Yeah, and circumstantially, the label that’s involved is Legacy, which does a lot of box sets. Some of that switch was because I wanted to re-issue everything on vinyl. We started to do that, but the economy wasn’t really right for it, so I had to swallow the disappointment of that. Then we started thinking about a DVD, and started digging and found hundreds of hours of great recordings.

Then the DVD started to going to the wayside and turned into rarities and live discs. It was about an eight-month process and that was full time. A lot of listening, choosing, sequencing, re-sequencing.

G: I was surprised there isn’t a DVD in this package. There seems to be so much good video of you from around the world.

BF: It was really just the economy. Sure, there’s a great television performance in Japan. Great, and it’s going to cost how much? Paying for it wasn’t going to work. You can see it on Youtube. That’s not a sad thing, really, because it allowed more space for music and that’s what I do.

G: One of the things that I think people find attractive in what you do is that you’re active in ways one might not expect. Working with the author Nick Hornby, for instance. Is that something that you do consciously or do you follow wherever the road takes you?

BF: It’s a little bit of both. I follow my instincts. It’s a good idea to apply rational thinking to those things before collaborating with a homeless person or the dictator of a country somewhere. My instincts tell me to collaborate with people who are islands. They are just who they are despite what anyone might have said about them. It’s an opportunity to give them a voice that they might not have had and then I’m speaking in a voice that I might not have enjoyed before. They can be really good. But there have been some that haven’t worked.

G: Anything you can mention?

BF: Sure, I spent some time in a studio with Josh Groban and we had a blast. He’s one of the most talented people I’ve ever met. He’s smart, charming. I’m proud to call him my friend. We really didn’t do anything but watch Tim and Eric videos for two days. I think we’re determined to do something really good together at some point. I think we both walked away from that disappointed.

G: People are excited because there are new Ben Folds Five songs in this set. You’ve talked about possibly getting together and maybe making a new album. Is that still just a possibility?

BF: I think we will. We don’t have to, which is kind of cool. But we’re going to go into the studio in December. I’ve got a lot of ideas and they’ve felt really good.

G: One of things I always remember about you is seeing the band play in a small club. I can’t remember the name of it, on the Lower East Side of Manhattan, around the time the first record came out.

G: You remember! That's cool. I recall you tying the piano to the back of the van or the trailer or whatever. It was after the gig and with the struggle involved, I thought, “How long is this going to last?”

BF: Good point. We did that for three years. That’s why when we had our first hit, or a hit, we weren't celebrating. We were relieved! We just fell down and said, “Holy shit, now someone else can move that goddamn thing.”