Interview with JNL Barbecue Pitmaster: “A Lot of Fire and A Lot of Meat”

JNL Barbecue, a new barbecue trailer located at the new Buzz Mill Shady location, will present to the world Ben and Sarah Lambert’s vision of what Texas’ tradition of barbecue can be.

Named after Ben’s father, JNL will be slinging ‘cue on Saturdays for the foreseeable future, with expanded hours to come. We sat down to chat about continuing traditions, starting new ones, and what it takes to open a new barbecue joint. 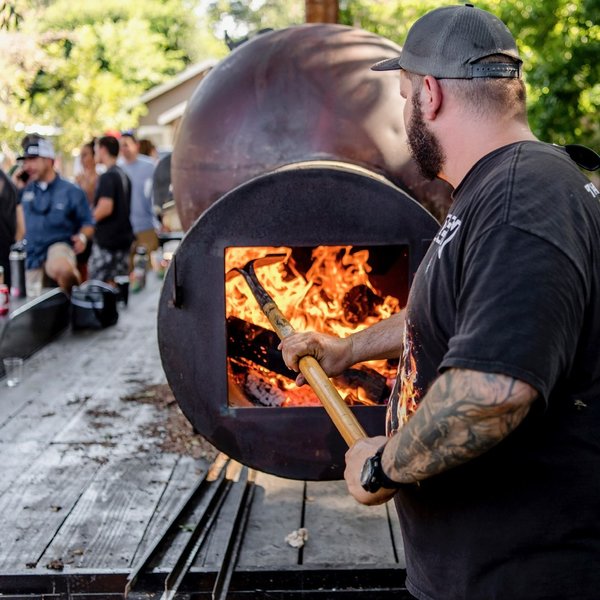 Austin Chronicle: Let's talk about the personal nature of this venture for you and what it means to have your own barbecue place and put a stake in the ground.

Ben Lambert: I guess I could go back as far as my parents. Growing up way out in the country, to build my dad's barbecue pit we would grab river rocks and pile them up to make this big cooker. People would drive for miles to get a bite of my dad's barbecue. Then I moved to Houston, and after that my dad passed. I wasn't doing any cooking for a while, and I started cooking at a place called Swinging Door back in '98, '99, in Richmond. They're a pretty big place. This is way before Aaron [Franklin] came around with his method of finishing briskets. A lot of the places, they would just cut the point off the brisket and send it to the back, and they'd chop that up for beef sandwiches. So Aaron came along and changed all of that. Then everybody was trying to use his method, or just trying to get parts of his method.

Back in 2012, that's when I started working over at Blue Ox, and my buddy and I managed that place for a year and a half, until an old co-worker from there told me that Franklin was hiring. So I was over there, experimenting with one cut of meat for a long time. When I first started over there, we were cooking maybe 75 briskets for our biggest days. When I left, we were at about 120 almost every day. So just being in the smokehouse that long made me really obsessed with trying to get that thing perfect and trying to get it right. One day I just realized that I'm not getting any younger, and there's a lot of other aspects of it that I really want to try and figure out. That's when my wife and I decided to get our own thing going.

AC: And at the end of this, you've got your own place, which is pretty awesome, but it's probably also nerve-wracking as well. What's it like having one of your own?

BL: When you say that you're going to do it, that's all you're getting out of it. There's nothing else that can really prepare you for all of the hurdles and red tape and everything you have to go through from it. Just having a strong support system from people that are in the barbecue community – because it is a strong community – and friends and family being able to help out with that. It gets stressful, but as soon as you get the ball rolling, it's going to get easier and better from there.

AC: What's next, and what's your outlook and take on this barbecue thing?

BL: I don't really see it slowing down. Talking to Daniel Vaughn a lot, and he keeps wondering when it's going to stop. I don't know, it's Texas food. It's just what we have here because of old settlers and all that. We have our own type of sausage, we have our own way of cooking. It's not necessarily better or worse than any other place around the country that are doing their own thing, but it's its own thing. Central Texas barbecue, especially in Texas, it's all in oak, it's all long, slow cooks. But as far as where I think it is, it's a beast. It's an amazing, beautiful, sexy beast. Just being a part of it for as long as I have, the only thing I could ever hope to get out of it is just to stick true to the traditions of it. By naming the place after my dad, just feeling like I make my parents proud of it.

AC: My sense is that a lot of places will have a two-fold approach: We've got to do the basics right, but then a lot of people will have one thing that's their extra passion. Do you have something like that, that you're planning on doing as a specialty?

BL: Well, I was a rib cook over at Franklin for a little bit, so I gauged on how to cook ribs the way that they like doing it. The way I like doing it's a little bit more competition-style – it's not as fall-off-the-bone. But one thing I've been working on is our al pastor ribs, because that's my favorite taco in the world, an al pastor taco. If I could mimic that coming off of a bone, that's what we've been working pretty hard on trying to work out.

BL: Normal pastor, you're thinking about pineapple on top, and it's going around cooking and you cut some pineapple off, and you cut your meat off. We've kind of been able to develop our sauce for it, to be all of that flavor, then still doing it in the method that I'm used to doing it. You're saucing it halfway through the cook, and not just finishing it with sauce at the end like Applebee's or something. So the flavor, I think, is pretty dead on to what you'd want from a pastor taco. It just doesn't have cilantro and lime thrown on it.

AC: You talk about Texas food, and we have the tentpoles of Texas food. We have barbecue, we have chili, tacos. Sort of mixing and marrying that stuff is great, and it's both authentic and experimental.

BL: Yeah, without having to call it "fusion." AC: You're not trying to make something that you really shouldn't. It's natural, right?

BL: Right, and what we're trying to do with all of this is just trying to add influences from our lives. So there's going to be something about Sarah’s dad and mom, and my barbecue experience of my entire life. I grew up going to school in Uvalde, and that's pretty much the home of Texas barbacoa. So of course, we're going to be making our own tortillas and doing barbacoa. All of the influences with food, why not cook that and share that with other people?

AC: Food-wise, what do you anticipate being the next thing into the mix for the menu?

BL: We pretty much have all of our menu worked out, so we're still going to have pulled pork, and we're going to have turkey, and some more sides. So we'll have green beans and our coleslaw, then we're definitely going to run all kinds of specials, too. There's also veteran benefits that we want to try to get attached to, then we'll try and get more whole animal live-fire cooking to be able to run benefits for those.

AC: You've got a big space out here in far east Austin, and you've got some room to play. What do you want to do with all the space you have out here?

BL: The possibilities are really limitless. What I’d eventually like to do is have some kind of yearly barbecue festival. We've got a decent amount of friends in the barbecue world that just like to cook random, awesome stuff. My buddies have built our cooker for us – Mill Scale Metalworks, down in Lockhart, great guys. Everything they're doing down there with different cooking apparatus, we could have any number of different chefs out here with a different method for each person. So with all of that space, I'd just love to be able to have a lot of fire and a lot of meat out here.