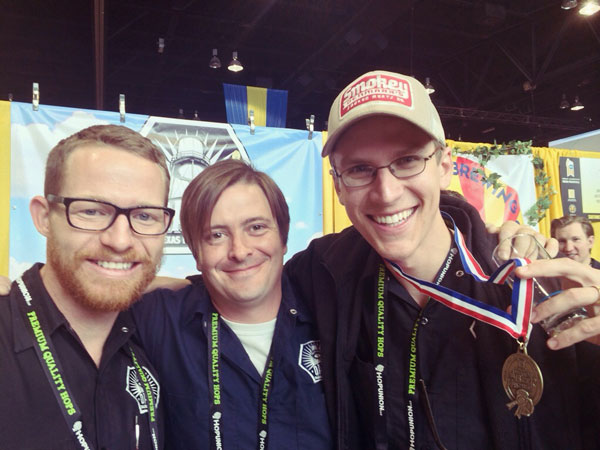 The Oasis team won with their English-style best bitter, the London Homesick Ale. Head brewer Spencer Tielkemeier has won awards as part of other Austin brewing teams, this was his first outing leading a team.

"Of all of our beers, this is the one we've worked the hardest to perfect," Tielkemeier says. "There are plenty of recipes for this style of beer because it's so popular in England where it wins lots of awards. We tweaked the recipes until we got something we liked, always striving for authenticity." He went on to explain that there are three categories of English bitters – ordinary, best, and extra special bitter (ESB) – but there are very few bests produced in the US. "These days, so many American beers are hops driven with a higher alcohol content. Not too many American craft brewers bother with the delicate gracefulness of an English-style best bitter," Tielkemeier says. In fact, the London Homesick Ale is the only canned American best bitter that Tielkemeier is aware of.

Tielkemeier's road to local brewing success is an testament to the camaraderie in the close-knit Austin craft brewing community. He first picked up the art of home brewing from his dad while studying at UT. He graduated in 2009 with a fine arts degree that didn't exactly reveal a direct career path. "I knew I was interested in brewing, so I started approaching breweries, trying to catch on somewhere," Spencer recalls. He did a short stint at Independence Brewing to learn how the bottling line worked and then signed on as a delivery driver and keg washer at (512) Brewing Company.

After working his way up to the brewing team at (512), Spencer was hired as a brewer at the Uncle Billy's in the Oasis, Texas development. He was there about six months before the ill-fated restaurant and brewpub closed in November of 2012. He returned home from his honeymoon to find himself out of a job, but was soon invited to work at Live Oak Brewing. "I was really glad when the Live Oak guys reached out to me and might not have ever left if this opportunity hadn't come along," Tielkemeier explains.

That opportunity was to become head brewer at the new Oasis Texas Brewing Co., a business backed by developer Max Schleder. Although the financial base of the new brewery is the wholesale sale of beer in kegs and cans, they also operate a comfortable taproom on the third floor of Oasis development with a breathtaking view of Lake Travis.

Despite the recent gold, Tielkemeier does admit his limitations. "I am definitely not a food guy, so we've partnered with the guys from Noble Sandwiches out here to do food for the taproom," Tielkemeier says. Noble provides beer-friendly snacks and (of course) sandwiches while Tielkemeier and his team take care of the session beers. While the London Homesick Ale and other Oasis beers are widely distributed, the "delicate gracefulness" of the English-style best bitter may be best enjoyed while watching a sunset.

Several other area brewers were recognized in Denver as well – including Austin Beerworks, Pedernales Brewing, Real Ale Brewing (who also won a gold), Pinthouse Pizza, and Thirsty Planet Brewing. For a list of all the festival winners, go here 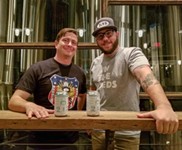 $2.13 Pale Ale, WHUT?
Oasis Texas Brewing Company and In the Weeds beering up together