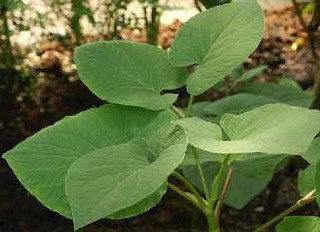 Hoja santa (Piper auritum) is an aromatic herb with a large, heart-shaped, velvety leaf which grows in the tropics of Latin America.

The name hoja santa means “sacred leaf” in Spanish, but it goes by other monikers: acuyo, yerba santa, hierba santa, Mexican pepperleaf, root beer plant, and sacred pepper. A Mexican legend says that the Virgin Mary dried diapers of the infant Jesus on the branches of this plant, hence the name. Sounds implausible to me, and diapers do not sanctify a plant in my book, but stranger things have happened.

It is often used in Mexican cuisine, especially around Veracruz, as a wrapper for cheeses, tamales, or for seasoned seafood, poultry, or meats which are then steamed or baked; the leaf itself is not usually eaten when used as a wrapper. It is mainly a flavoring agent that is discarded after the filling is eaten. It is an essential ingredient in mole verde and mole amarillo, green and yellow seasoning pastes from the Oaxaca region. It is also chopped up or julienned and added to stews and soups, and added to scrambled eggs; when added to moles, soups, stews, or eggs it is eaten. In Central Mexico hoja santa is used to flavor chocolate drinks, and in Tabasco and Yucatán it is an ingredient in a green liquor called Verdín. While most often used fresh, hoja santa can also be used in dried form, although drying subdues much of the flavor and makes the leaf too brittle to be used as a wrapper.

Hoja santa is a member of the pepper family, so there is a slight peppery element to the flavor. It contains some of the same aromatic oils found in sassafras (safrole in particular), hence the root beer smell. The taste is unique, with definite root beer nuances and a sweet anise edge; immediately apparent when you crush or nibble on a leaf. It is complimentary to the basic Mexican flavors of cilantro, lime, garlic, and chile peppers, and when cooked, sort of lurks in the flavor background rather than dominate. If you are going to use it to wrap a food, the leaf either has to have been picked far enough in advance to have sufficiently wilted, or the veins will crack and the leaf will split when you try to wrap with it. An alternative is to soak the leaves in hot water to make them limp enough to fold, although this reduces the flavor intensity slightly.

Hoja santa grows very well in the Austin area, preferring a rich, moist soil with lots of compost, and morning to midday sun with afternoon shade. It will freeze to the ground with the first frost, but reemerge late in the spring and rapidly grow to 6+ feet in height. It spreads by underground roots, so it can be a little invasive; give it plenty of room to grow.

To cook with hoja santa try wrapping fish fillets, shrimp, scallops, chicken, or pork in a leaf with aromatics like garlic, shallots, or grated onion, using a little white wine, butter, and citrus. A Mexican verde sauce made from roasted tomatillos, garlic, and scallions, cilantro, Serrano chiles, and lime pairs well with the leaf, as does a Veracruz-style sauce of olive oil, tomato, garlic, white wine, capers, olives, green chiles, parsley, cilantro, and butter. It also works reasonable well in a pesto, or minced and tossed with pasta. Grows like a weed, makes a dramatic accent in the landscape, and taste great on the plate; what more could you ask for?