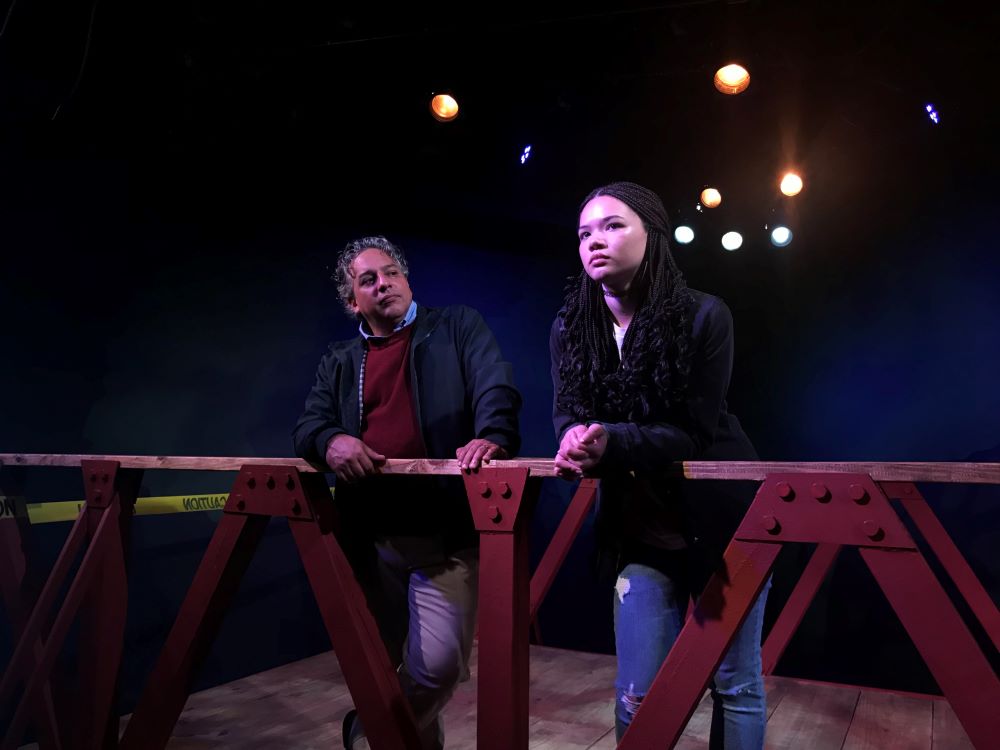 In 2007, local storyteller Raul Garza won the National Latino Playwriting Award for his script Fantasmaville, a humorous look at a Latina woman and her Anglo husband struggling with the gentrification of their Austin neighborhood.

The work took first prize by serving up a comedic yet authentic voice for its characters and astonishing the judges with a vivid sense of place that drove the story. In a subsequent production by Teatro Vivo, the play impressed critics with its timely and insightful focus on assimilation and acculturation.

To varying degrees, these same signature elements weave their way through the playwright’s more recent works, including El (Teatro Vivo, 2016), Confessions of a Mexpatriate (Hyde Park Theatre, 2018), and There and Back (Ground Floor Theatre, 2018). But in Garza’s latest and most mature work, Running Bear – which is getting a captivating world premiere production at Hyde Park Theatre – voice, sense of place, and social relevance are profoundly front and center.

The play revolves around Lucas (Mical Trejo), who is a successful middle-aged structural engineer, and Emily (Macy Butler), a conflicted and despondent 17-year-old. The two happen to meet on a bridge in Irving, Texas – their hometown – where Lucas has returned to receive an award for the bridge’s architectural design and reminisce about his youth in the undeveloped woods and surrounding suburban park. She is seeking solitude and desperately needed relief from the weight of the world hoisted on her young shoulders.

[Raul] Garza gives his characters heightened speech – a voice that is smarter, more expressive, and more eloquent than normal discourse.
As the play progresses, it becomes clear that the bridge – an 8-by-14-foot hardwood and red metal structure created by Mark Pickell and dramatically lit by Shelby Gebhart, with nicely understated shadow images of foliage painted into the background by Lilly Percifield – serves a greater purpose than connecting the muddy banks of Running Bear Creek. On this day and at this moment, it connects two incompatible and damaged individuals, helps heal their shared sense of cultural alienation and social isolation, and allows the past to intersect with the present. As their exchanges shift from antagonistic attacks to compromising conversation to self-disclosing monologues, director Rosalind Faires brilliantly adjusts the actors’ positioning and proximity accordingly. They go from staking out territory on one side of the bridge to sharing space.

There’s poetry to go with the choreography. Garza gives his characters heightened speech – a voice that is smarter, more expressive, and more eloquent than normal discourse – through which to impart their astute and emotionally charged observations about life. The often dense dialogue is softened by the occasional chirping of birds from the surrounding trees, courtesy of sound designer Robert S. Fisher. The intense Trejo and the absolutely riveting Butler have mastered this manner of speech, but they have also created interesting and accessible personas for their characters that make this speech sound normative. They have also mastered the art of listening to one another. On opening night, there wasn’t a moment of disengagement or duplicity between the two, which kept the audience thoroughly engaged throughout this one-act, 90-minute production.

This is Hyde Park Theatre’s first original play in over two years. Running Bear reminds us of what we’ve been missing.