This Is Who We Are #11: Frontera@Hyde Park Theatre's blood pudding

A man is walking, intently, with purpose, then he suddenly stops, as if he's heard someone call his name or caught a whiff of a familiar scent, something that reminds him of home. He turns, casting a look back over one shoulder, as if expecting to see someone or something that he knows. But he sees nothing. His face clouds with puzzlement. He casts a look over the other shoulder, but there is nothing still. The lines on his face deepen. Was it merely a breeze? A shadow? Or was it perhaps a spirit, an ancestor, a piece of his history whispering at him to remember, to bring his past forward and carry it wherever he is going into the future?

Nothing so explicit is asked in the opening moments of this Frontera@Hyde Park Theatre production of Sharon Bridgforth's new play, but it does begin with pauses and puzzled glances, and they sow seeds of absence, small, nagging feelings within of something missing or at best dimly recalled. We may not have a name for it, but when the full ensemble takes the stage and begin to speak of events from days long past, of old conflicts and actions taken, of comings together and goings apart, we hear them say without speaking, "This is what you miss. Our story. Let us tell it again."

And so they do. They spin a story set among the swamps of Louisiana and curlicued iron fencework of New Orleans, a story of the Creole world, of the blending of bloods – the Native American, the African, the European – and the singular people to whom it gave birth. It is a story of natives who wipe out white colonists with their own guns, simply by asking politely to borrow them; of blacks who make the saloons of the libertine New Orleans halls of freedom, places in which their song can be heard openly and with pride; of the woman-loving woman Bull-Jean, Bridgforth's lesbian folk hero who, as in the playwright's other works, is struck by beauty and devotedly, irrevocably, opens her heart to it; and of much, much more. The story flows forth like water, bubbling, cascading over time and place, swirling us through this time and that, there and here, sometimes in the sound of one voice, sometimes in the sound of many. As always, Bridgforth's sensibility is fluid, shifting setting and perspective, giving us one point of view, then another, until we find ourselves surrounded by the various currents of narrative and history. She immerses us in the waters of these cultures, baptizes us in them.

On this occasion, one is sorely tempted to stay under the waves. The atmosphere here is as seductive as a Southern summer twilight. Leilah Stewart's set is dominated by a wall of tranquil pastel blue off which hang weathered wooden shutters. When Ryan Brummel's warm, placid lights fall across them, the long, slatted shadows create a lazy evening world that calls us to linger. And the actors who people that world are so feeling, so alive in their evocation of this past, they make tarrying there inviting. Stacey Robinson is commanding as Bull-Jean, her devotion so intense as to stop your heart, her vulnerability enough to crack it in two. Florinda Bryant is a welcoming presence, a figure of open arms and comfort. Renita Martin has a saltier demeanor; the tang to her talk, the wry twist in her smile, betrays a turn or two around the block. Zell Miller III projects that jester's spirit, a sly mocking air tempered with a friendly wink and open smile. And Djola Branner, with his tall, lean frame, radiates focus and discipline and dignity. Each of these artists is captivating in her or his distinct way, providing some richness of personality, but the magic comes when they mix – as the blood does in the Creole world, as time and space do in Bridgforth's poetry – for then, in the collective movement crafted by director Laurie Carlos, the intertwining of voices she orchestrates, something greater emerges: a community singing its story, dancing its story. And it is a wonder. 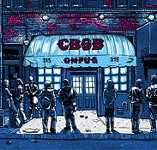