City group gets moving on policy plan for Austin creatives 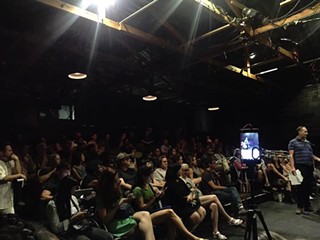 The special called meeting of the Austin Arts Commission pretty well lived up to its name Tuesday as an SRO crowd at the Off Center reacted to the city staff's "Music and Creative Ecosystem Stabilization Recommendations" regarding the Mayor's Omnibus Resolution, and the commissioners showed some hustle in addressing the crisis facing local creatives.

The idea of squeezing in this additional meeting between the commission's last regular meeting on July 18 and the next one on Aug. 15 was itself indicative of the group's sense of the clock ticking. With the city's FY 2017 budget process moving into high gear, the commission was intent on making known to city council which recommendations in the staff document it considers priorities and, if possible, specifying strategies and attaching dollar amounts to them before budget decisions got set for the coming year. The commission came into this extra meeting having already identified what it viewed as the four most important areas: Affordable Space; Land Use; Permitting and Licensing; and Incentives, Tools, and Loans. And there was an established sense that the language in the staff guidelines needed to be much more forceful – active rather than passive, as commission Vice Chair Michelle Polgar phrased it – and to be broadened to include all creative industries in those sections where recommendations appeared to apply solely to the live music industry.

But before the commissioners started talking about the recommendations themselves, they spent much of the first hour listening to the public. Several of the 17 speakers were familiar faces from previous hearings and spent their time reiterating the urgency of the current situation regarding the high cost of being a creative in Austin right now. Up first was Madge Darlington of the Rude Mechanicals theatre collective who reminded the commissioners that the very space they were meeting in, the Off Center, which the Rudes had been stewards of for 17 years, would be no more come May 15, 2017. The collective had bargained away additional time in the space for a break in its lease, and even then rent had risen 340%. And despite a three-year search for a new home, this internationally recognized company has been unable to find a space it could afford. "We need a space that costs $3-$4 a square foot," she told the commissioners, and even the friendliest developers the Rudes have dealt with can only do $15-$16 a square foot.

That grim contrast between current market prices and what local artists and musicians can afford was echoed by Austin Creative Alliance CEO John Riedie, who warned that the recent closing of Salvage Vanguard Theater and looming shutdown of the Off Center were just the beginning of what's coming for arts venues. In an ACA survey of 230 creative entities, 52% said they expected to be priced out of their current spaces. "That's apocalyptic," Riedie noted. Other voices pressed the matter. Patti Neff-Tiven, executive director of Ground Floor Theatre, the Springdale Road performing arts space that was shuttered by the city and has been fighting to reopen under code, related some of the challenges that theatre has encountered in that effort and concluded, "Building a theatre is cost-prohibitive in this city." Joshua Green of Pump Project also spoke to code issues and the difficulties they pose for nonprofits with minimal resources to make expensive infrastructure changes. He was the first to suggest that this be made a priority, with Fusebox Festival Managing Director Brad Carlin and theatre director Derek Kolluri chiming in with calls for the city to develop policy tools that will enable more and better public-private partnerships on creative space projects, à la thinkEAST (Carlin), and to complete and refurbish the city's existing cultural facilities such as the Carver Museum and Library, the Emma S. Barrientos Mexican American Cultural Center, and the Dougherty Arts Center and lower the rates to make them more accessible for artists to use (Kolluri).

Creating more affordable creative spaces is all well and good, said singer John Pointer, but if we don't increase the money that creatives get, they still won't be able to afford the cheaper venues. That was another much-voiced theme among the public commenters: the need for better pay for creatives. "We need to take a hard look at what we pay artists," said Ballet Austin Executive Director Cookie Ruiz. Without a living wage, the artists and musicians and other creatives who have contributed so much to Austin's quality of life won't be able to live here any more. "All we want to do is live," insisted SVT Managing Director Florinda Bryant. "That's all."

The Arts Commission appeared to hear the message. "We need to make it clear that creatives are professionals," said commission Chair Lulu Flores, and that what they do is not a hobby. Commissioner Bruce Willenzik called for more professional development training and a campaign to urge local businesses to hire creatives. Commissioner Jaime Salvador Castillo reiterated the need to finish out the city's cultural facilities. Polgar emphasized the importance of a venue assistance fund to aid companies such as Ground Floor Theatre. Commissioner Matt Stillwell took that idea a step further as the body was discussing a motion to set its priorities among the recommendations and proposed an Emergency Venue Assistance Program for FY 2017, with a budget of $350,000 to be drawn from the city's General Fund – $350K being, as Stillwell pointed out, 1/100th of 1% of the city's $3.5 billion annual budget. The proposal was received enthusiastically – especially by the audience – though it caused a parliamentary kerfuffle as the rest of the commission struggled to figure out how to treat the proposal as an amendment within a motion. The ensuing debate, which went on at length, was aptly summed up by Polgar as "procedural purgatory."

Even so, it didn't derail the sense that the commissioners knew they were racing deadlines. "Time is of the essence," stated Commissioner Brett Barnes, and with a budget review for the Economic Development Department set for Aug. 10, he wasn't kidding. Before the meeting wound up at 8:30pm, the commission had also established three working groups: one of Arts Commission members only, one to develop policy with members of the commission and public volunteers, and one to address affordability issues that would include members of both the Arts and Music commissions.

Commission Chair Flores talked about the need to identify items in the city staff recommendations that could be addressed in a time frame of 30 to 90 days. Even so, the future of the city's live music and creative ecosystem wasn't going to be solved quickly or without the public's continued involvement. When there are meetings of the city council or about code revision changes or anything else that affects creatives' needs, "you need to show up. Tell council members you will be watching them." Barnes was equally insistent that artists and musicians reach out to their council members. "You've got to at least start developing these relationships," he said. "Come to the meetings. Find that time to come."

The next Arts Commission meeting is set for Mon., Aug. 15. 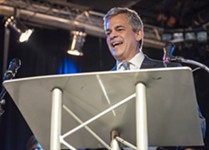