Holy Mountain and Red 7 aren't the only hot spots of local culture to lose their leases of late. This week saw two even more established performing arts companies suffer the same fate. So to the list of arts groups being forced out of their longtime homes, you can now add Salvage Vanguard Theater and Tapestry Dance Company.

Coincidentally, both companies moved into their current venues – SVT's on the Eastside at 2803 Manor Road and Tapestry's at 2302 Western Trails in South Austin – in 2007. And while the two spaces were miles apart, literally and figuratively, both were creative outposts in areas of the city where little like them existed before they moved in, and both benefited from considerable energy and capital expended by those companies in creating cultural venues of value to the city generally and their neighborhoods in particular.

For Tapestry, the situation is a case of déjà vu all over again. The professional rhythm tap company moved to the Westgate area eight years ago because it was forced out of its previous home of 10 years. (The space a few blocks west of Lamar at 507 Pressler was being torn down to make way for … wait for it … condos.) This time around, there's no talk of condos, but the building was bought out from under them, and the company was told it couldn't stay. The timing came with more than a little whiff of irony: Tapestry's first show of the season, which it just closed Oct. 11, was about being homeless.

The silver lining in this dark cloud is that Tapestry has already secured a new place to stay. As of Monday, Oct. 19, the company has begun operating out of the Balance Dance Studios complex at 4544 S. Lamar. Tapestry will teach all of its classes in the state-of-the-art studios there and will have access to Bravo at Balance, the 90-seat black box performance space that opened there earlier this year. As a way of familiarizing people with the new space, Tapestry and Balance will co-host a community open house Fri., Oct. 30, 5-7pm. The public is welcome and, with it being just a day before Halloween, costumes are encouraged. For more information, visit tapestry.org.

Alas, for SVT, no such silver lining exists … yet. But then the company isn't out on the streets just yet. The theatre's current lease runs through June 30, which means that the theatre can complete most of the 2015-16 season at home – and by home, we mean the only home that Salvage Vanguard has ever had. The acquisition of the 6,000 sq. ft. warehouse in 2007 was the first time the company had a stage of its own since its founding in 1994, and it's built that space into such an arts center – renting out its two theatres (99 seats and 49 seats) to a variety of theatre, comedy, and music groups and exhibiting a host of artists (including this writer) in its gallery – that it's difficult to imagine SVT returning to its itinerant roots, jumping from theatre to theatre whenever it mounts a production.

Indeed, the degree to which SVT has made its space available to others means the loss of its space isn't just a tragedy for Salvage, but a tragedy for all the cultural organizations that have made 2803 Manor their de facto home in recent years – a list that includes Trouble Puppet Theatre Company, Church of the Friendly Ghost, Gnap! Theater Projects, Weird! True Hollywood Tales, Kathy Dunn Hamrick Dance Company, Glass Half Full Theatre, Doctuh Mistuh Productions, Breaking String Theatre, and Lucky Chaos Theater Projects, among others. It isn't just SVT Artistic Director Jenny Larson and her crew who are in need of a new space. It's all the artists in all those groups. And in the pricey environment that is 21st-century Austin, homes that small independent arts groups can afford are hard to come by. As Hamrick noted in the press release announcing the loss of Salvage's lease, "SVT is the only theatre in Austin that is affordable, suitable for my work, and available during our season. I can honestly say that without SVT, I don't know where I would be able to present our dance season.”

That's the kind of arts venue Austin is losing.

At least some people are aware of that. Larson reports an "incredible" show of support since the news went public: "We are definitely surrounded by a very caring community. Many people have offered help, offered to meet with me, donated. The outpouring of love is encouraging, and as we start planning our next steps, I feel confident we will be able to create a space for creatives in Austin if we all work together and if the city gives us the support we need." She suggests the kind of municipally protected 99-year lease at an affordable rate that would save a vulnerable nonprofit from the hammer blows of market forces.

Larson may have already found an ally in city government. In response to the first news of Salvage Vanguard's situation, Council Member Ora Houston of District 1 released a statement saying, "The announcement that SVT will lose their lease makes me very sad. It is an example of the loss of creative spaces for artists. I am frequently a member of the audience at SVT, it is within walking distance to my home. SVT is multi-facetted, inviting, and a creative space. SVT is so important to District #1 that in May, 2014, my announcement to run for City Council District #1 was held at SVT. How many more creative, local venues must we lose, before the members of the community say stop – Enough is Enough!"

Larson has asked those who are alarmed by her theatre's situation to become "a guardian of the Vanguard." Here's hoping Houston answers the call. If you'd like to, visit salvagevanguard.org/guardians, email jenny@salvagevanguard.org or call 512/474-7886. 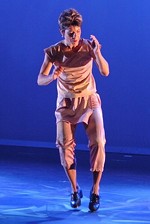 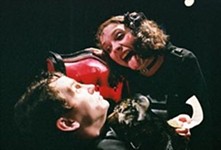 This Is Who We Are #5: Salvage Vanguard Theater's Death of a Cat
A daily affirmation of Austin's creativity from the Chronicle archive 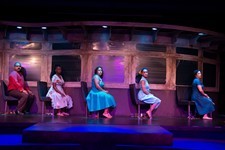 Review: con flama
Salvage Vanguard puts us on the bus for an illuminating ride