Mac Blake snags the crown of Funniest Person in Austin 2013 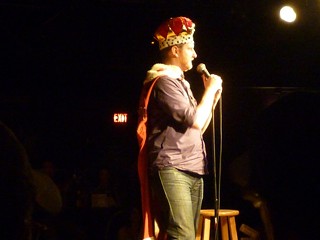 "I was in a Walgreen's … at night. So already I fucked up," opined Mac Blake in leading off a very funny story about a mouth-breather shopping for a belt at the drugstore. Where the comedian didn't fuck up was walking into Cap City Comedy Club on Monday night. Because he walked out wearing the crown of Funniest Person in Austin 2013.

And it wasn't as if Blake just breezed out with the win. Long gone are the days in which the FPIA finals were padded with the occasional promising amateur or freakshow comic who did the stand-up equivalent of a bellyflop in the last go-round. It's a measure of how polished and, well, serious the local stand-up community has gotten that, come finals night, any person who takes the mic could also take the title. And so it was with the 28th competition: The packed house at Cap City were graced with 12 quite tight, exceedingly funny sets.

That may explain Blake's surprise when his name was announced as the winner. Returning to the stage with a somewhat dazed expression, which persisted as 2012 contest winner Ramin Nazer draped the cheesy cape on his shoulders and tried to get the crown on his head, Blake acknowledged the tough competition by telling the audience that the win was "meaningful because the Austin comedy scene is so strong." Blake should know, given his ties to not just the stand-up side of it but also sketch – he's active with Mascot Wedding, Stag!, Hot Property, Master Pancake. (See his comments in Wayne Alan Brenner's article on this week's Austin Sketch Fest in the Arts section.)

But even among such experience jokeslingers, Blake's set was memorable, from the tales of shopping for cell phones with his grandmother, which morphed into imagining himself as a crotchety old man who can't remember if the TV is something you can have sex with (it is) to his antipathy toward Applebee's, which he claims is decorated "like a former KGB agent's idea of what Americans like," upon which he then adopted an accent two steps removed from Boris Badunov to lead us on a tour of the chain's pathetic, dated decor. In the midst was also a rant about how unnecessary it is for people who go to Whole Foods to wear workout clothes – We get it! You're healthy! – and how he doesn't go to Jack in the Box at 4am in jizz-crusted pants carrying a bong, because they get it! – a bit which also earned Blake Joke of the Night honors.

Hot on Blake's heels was Chris Cubas, scoring a threepeat at second place in the contest. It was another well-deserved honor for the man with the exploding 'Fro, who was electric in his descriptions of life in an apartment complex with an illegal day care as a neighbor ("A child pooped his pants at me!"), his arachnophobia ("I see a spider the size of a quarter in my sink, I leave the apartment. It can either move or take over the lease."), and, of course, because it's Chris Cubas, porn. Third-place finisher Cody Hustak rooted his set in comedy of cruelty, but proved how hilarious that can be. ("I'm trying to get more culture, so I stoned a whore to death today. I choose the culture.") What doesn't translate into print is how cheerfully Hustak lays down such harshness; you'll happily follow him into the most unsavory territory.

The new FPIA will no doubt be doing a lot more stand-up in the coming year, but if you want to see Blake right away, check out his work with Stag! and Master Pancake in this week's Austin Sketch Fest. For more information, visit www.atxsketchfest.com. 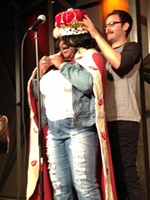 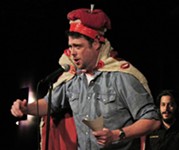