The Luv Doc: A Lot of Guy Friends 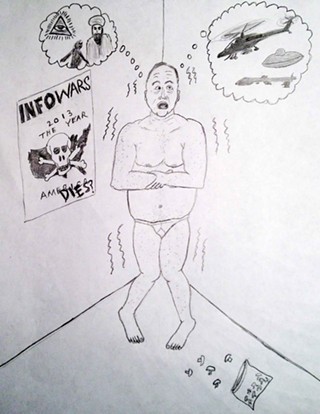 Luv Doc,
I just started dating a girl I really, really like except for one thing – she has a lot of guy friends that she spends time with. I have mentioned that this bothers me but she says I am being silly and that they are just friends and that’s all. Should I break it off with her before things get too serious?
- Fifth Wheel

Absolutely you should break it off, Fifth. Love is not for the timid. You can’t dip a toe into love and see if the water is warm. You dive in bare-assed in the middle of December screaming, “Geronimo!” because love is a ridiculously absurd cosmic joke and you’re the punch line. If you are one of those people who doesn’t want to look like a fool, have your heart broken, or start bawling at the Pizza Hut salad bar because “she used to love the crispy chow mein noodles,” go hold up the fucking wall with all the other lonelyhearts so there’s more room for the rest of us to dance.

If you ask me, this girl sounds like a keeper. My guess is that she has a lot of guy friends for one of two reasons:

1) She’s smokin’ hot. If so, good for you! You will be the envy of all your friends, family, and even complete strangers who will objectify her based solely on her appearance. Get comfortable with people thinking you’re out of your league because it will haunt you to your grave – or until a really embarrassing breakup where you, seeming only slightly less paranoid than Alex Jones on psychoactive mushrooms, will accuse her of sleeping with everyone up to and including the Pope. No, she won’t take you back.

2) She is the coolest chick ever, and even though she might have a funky grill, a lazy eye, or a Fran Drescher laugh, she is universally beloved for her rapier wit, limitless compassion, exquisite fashion sense, insatiable sexual appetite, and her ability to field-dress a javelina on the tailgate of an F-250. She has many other talents and interests that will continue to expand and amaze you until you slough off this mortal coil – or, until you convince yourself she’s a serial sexaholic who is making a fool of you with every man/woman on earth. That breakup won’t go well either, but at least she will eventually forgive you. Oh, and no, she won’t take you back.

There is a very rare third possibility: that she’s a combination of the two. If so, all the more reason to throw in the towel right now. Here’s the thing: There is no way to control what someone else is thinking. You can only control what you’re thinking. I’m thinking you’re not strong enough to keep her, so let her go.