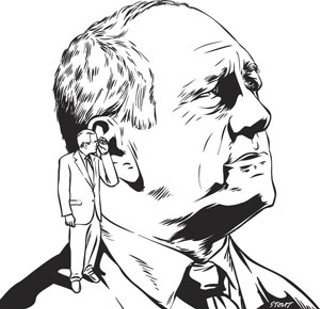 Israel – no country so tiny has ever generated so many headlines. The Encyclopaedia Britannica Almanac 2006 lists Israel's population at 6.5 million – 1.5 million less than New York City's. Area: 8,367 square miles, a thousand square miles smaller than New Hampshire. No natural resources to speak of. Average income: $16,020. Under "production" the Almanac lists manufacturing, electronics, and some minor agriculture – but fails to mention Israel's well-known arms industry, which was not above selling 508 TOW missiles to Iran (yes, Iran) in 1985 (Newsday, March 1, 1987). But the figure that leaps out of the Britannica Almanac's list is Israel's national debt: $111.6 billion.

That money mostly comes from United States taxpayers. No practical person expects such a tiny country, with no natural resources and a minimal per capita income, to repay $111.6 billion anytime soon. Or anytime ever. The "loan" is a continuing subsidy, the cost of doing business if the U.S. is to have a strategic client-state in the Middle East. As MSNBC's Tucker Carlson observed, Israeli soldiers go into battle "with the words 'property of the United States' on their rifles" (July 21). That's true in many more ways than one, and it is why Europe, Russia, China, and the Muslim world hold the United States accountable for any action of Israel's.

The greatest danger to Israel, in the long term, is its dependence on the United States.

It's widely reported that at present our government borrows $2 billion a day (mostly from China) to stay solvent. Even with these loans, the strain of Iraq has placed the U.S. Army in big trouble. The Christian Science Monitor (July 24, p.1): "The service is fast running out of money. ... Like many bases, Fort Carson in Colorado has [tightened its belt], closing two mess halls and skimping on staffing – even at a time when the base is growing. ... The picture that emerges is that the Army simply can't make ends meet." Military expert U.S. Rep. John Murtha, The Christian Science Monitor (July 24, p.3): "We have no strategic reserve. Our forces in the United States, 70% of them, are below deployable level overseas. ... The Army is struggling every day to meet their bills. It is a disaster." It is hard to imagine a greater danger sign for our or Israel's future. If our government is having trouble keeping its army intact, what will that mean for Israel's military?

Israel's foreign policy has been predicated on the United States remaining a superpower indefinitely. But nothing goes on indefinitely, and it is questionable whether a nation that must borrow $2 billion a day is still a "super" power. When it is no longer in the strategic interests of China to support our consumerism (and that day will come), what happens to Israel? Nations are coldhearted; they rarely do what, in their vision (however flawed or blind), is not in their interest. No one but the U.S. has a strategic interest in Israel; it benefits no one else to support it financially. If the day comes that we cannot, then, having followed our lead in alienating most of the world, how does Israel survive? Can it?

That dire question is for the future to answer. The present crisis is another matter.

So much havoc because three soldiers were kidnapped? As Roky Erickson said in another context, "You can believe that story if you want to." The New York Times (June 27, p.8): "Israel has at times made deals and exchanged prisoners. In October 2000, Hezbollah abducted three Israeli soldiers in an effort to free imprisoned leaders." The soldiers were murdered. "The same month Hezbollah abducted ... an Israeli civilian ... in exchange for the three dead soldiers and the [civilian's] release. ... Israel released more than 430 prisoners in January of 2004." What's changed so much since then? Iran's nuclear program has become an unavoidable, and perhaps intractable, issue.

Is it a coincidence that violence escalated into Lebanon the day George Bush was in St. Petersburg for the G8 conference? The common line, parroted by every talking head I witnessed, is that Iran instructed Hezbollah to kidnap the soldiers and fire some rockets to prove something to the G8 conference. That's possible. But, as events later proved, Russian President Vladimir Putin was firmly in Iran's corner at the G8. It strains credulity that Russia would have kept its support secret from Iran before the G8. With or without Iran's instigation, Hezbollah selected that day as an auspicious one to jump into the fray in support of Palestine's Hamas, which had been in furious contest with Israel since June 25. But Hezbollah's action was not terribly out of the ordinary. So why the escalation?

(Speaking of possibilities: Rockets were fired, but there is no proof who fired them; people were kidnapped, but there's no proof who kidnapped them; and there's no proof that some Hezbollah cell or other hasn't been co-opted by other powers. We must always remember that, in these matters, we're taking the word of official press releases. It's perfectly in character that Hezbollah performed these actions on its own or with Iranian instigation. But, in fact, you and I know nothing for certain.)

Again: Why Israel's massive escalation on that day? George Bush is in Russia face-to-face with leaders of the world's great powers. It simply is not credible that, at such a crucial juncture, the guy who's paying the freight doesn't have final say on whether or not such an escalation takes place. Whatever the provocation, the scale of escalation was a Bush-Cheney decision because, I believe, a larger plan was envisioned.

The initial Israeli reason given for the devastating bombing of Lebanon's infrastructure that day was "Hezbollah plans to transfer the kidnapped soldiers to Iran" (The New York Times, July 14, p.1). Next step: action against Iran.

But action against Iran would entail economic disruption – gas prices would shoot up to $4.50 a gallon, easy. Bush needed G8 support for such disruption. He came to the G8 with a very large carrot for Vladimir Putin, something Putin has desired very much: Russian entry into the World Trade Organization. For weeks, reports from all quarters signaled that the U.S. was ready for Russian entry to the WTO. According to The Christian Science Monitor (July 14, p.5): "Analysts say this 'carrot' that the White House is dangling is really more about Iran and winning Russia's support for a tougher stance." A much tougher stance. Action of some sort.

Putin turned Bush down flat. As much as he's wanted membership in the WTO, whatever Bush was planning for Iran was too high a price. That is the only way to make sense of Putin's statement after Bush blocked membership: "We will not participate in any crusade, in any holy alliances."

Putin made a point of calling the Iranians "our partners." Russia has oil. Lots. That oil could have mitigated the effects of an attack on Iran. Putin said no. In no uncertain terms. By his language he said clearly that anyone attacking Iran is attacking "our partners."

Then Bush "pressed to cite Iran and Syria in the joint [G8] statement with the other leaders and suggested that both countries were involved, if indirectly, in the attacks on Israel" (The New York Times, July 17, p.10). Putin blocked that. And told the world that he blocked it. The U.S. would have no statement from the world's major powers that excused any action against Iran. Like magic, Israel published no more statements about kidnapped soldiers being whisked to Iran.

Bush thought he could buy Russia's collusion on Iran with a WTO membership. It didn't work. And Israel and Lebanon are left holding the very bloody bag. Palestinians, too.

Poor Israel. So foolish as to trust the United States – not that, at this point, it has any choice. "Property of the United States" is engraved on its rifles, and now no one else has any interest in giving it more rifles. Or anything else.

Meanwhile, the U.S. had defended the ludicrous position of denying accountability for Israel's actions. In a press conference, White House spokesman Tony Snow declared, "We're not engaged in any strategy session with the Israelis, we're not cooperating, we're not conspiring" (CNN, July 19). The very same hour, in Tel Aviv, The Christian Science Monitor's Rafael Franco told MSNBC that high Israeli officials "told me they're in close conversation with the U.S. ... It's coordinated at the very highest levels."

Or it would be, if it weren't so terribly bloody.

Page Two: Stories Without Words
Would I miss Israel for Israel? I worried.