Dan Blocker of O'Donnell, Texas, was Hoss Cartwright on the television show 'Bonanza' and lives on through reruns and in a museum and small park in his hometown in the Panhandle 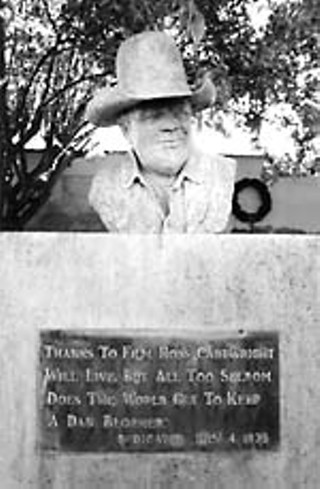 Dan Blocker of O'Donnell, Texas, was Hoss Cartwright. The gentle-giant character of the television show Bonanza lives on through reruns and in a museum and small park in his hometown in the Panhandle, 60 miles south of Lubbock.

According to those who knew Blocker when he was a kid growing up in his father's grocery store in this farming community, the man was much like the character he played. His heart was nearly as large as his girth. Blocker lived a Hollywood dream only to have it end at an early age.

The only son of Shack and Mary Blocker, Bobby Dan, as he was known as a child, was born in 1928 in the Northeast Texas town of DeKalb. Legend says that at 14 pounds, he was (and remains) the largest baby ever born in Bowie County. The family moved to O'Donnell in 1934, where his father owned one of three grocery stores in the town of about 3,000 residents. Today the closest grocery store is 18 miles away in Lamesa, and the population is a third of what it was at its peak.

"O'Donnell was quite a thriving little town when Dan lived here," says Doris Conrad, secretary-treasurer of the organization that maintains the local history museum. "We had two lumberyards, two drug stores, and two doctors and a dentist back then."

Several years younger than Blocker, Mrs. Conrad lived on the other side of Lamesa and didn't know the boy who stood 6 feet tall and weighed 200 pounds at the age of 12. A few years older than Blocker, her husband remembers seeing Bobby Dan around his father's store. As the young Mr. Conrad waited at the bus stop to head to the battlefields of World War II, Blocker gave him a candy bar.

Blocker's journey away from O'Donnell began in 1940 when he enrolled in school in San Antonio. While studying at Hardin-Simmons University in Abilene and Sul Ross State University in Alpine, he became interested in acting and graduated with a degree in speech and drama.

After teaching school in Sonora, Texas, and Carlsbad, N.M., Blocker and his wife, Dolphia, moved to Los Angeles, where he pursued a doctorate degree and acting jobs. His first big break came with appearances as the blacksmith on the TV show Gunsmoke. In 1959, Blocker was cast as Ben Cartwright's (Lorne Greene) middle son, Hoss.

Besides being one of the longest-running television shows, Bonanza was the first TV show broadcast in color. In addition to working 13 seasons on the show, Blocker was also co-owner of the chain of Bonanza Steakhouses.

It all came to an end in 1972. Blocker went into the hospital for gall bladder surgery, developed a blood clot in his lung, and died. He was 43 when he was buried in DeKalb along with his parents and sister. Bonanza was canceled the next year.

A year after his death, O'Donnell dedicated the town's only park to Blocker in a vacant lot next to the building that housed his father's general store. The centerpiece is a life-sized bronze bust of Hoss by artist Glenna Goodacre.

Across the street from the park is the O'Donnell Museum. Organized in 1976, the former bank and hotel houses a collection of artifacts donated by local families. "We try to show how people lived around here over the years," Mrs. Conrad says. Along with an exhibit on Blocker's life, the museum has two floors of odds and ends collected over the years, including farm equipment, quilts, and a large doll collection. In the collection is Geronimo's bow and quiver. The Apache chief's personal items were loaned to the museum by a local historian.

O'Donnell's claim to fame is announced on U.S. 87 by an image of Blocker painted on the side of a barn north of town. There isn't much left of the once-thriving commercial center except a few vacant buildings, the park, and the cotton gin on the edge of town. The museum is at the corner of Doak and Eighth streets. Operated by volunteers, the museum is open Tuesday, Thursday, and Friday from 10am to 12pm and 1-4pm; and on Saturday and Sunday, 1-4pm. No phone.