Cross of wood or cross of faith? 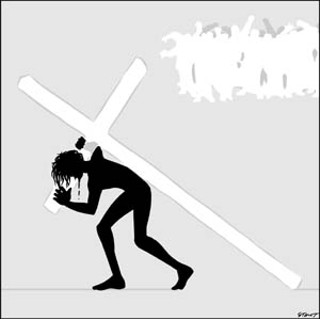 Art about Jesus rivals and often overwhelms the Gospels as a source of Christian feeling and belief. The greatest example is what are commonly known as the "[14] Stations of the Cross," on which Mel Gibson bases crucial passages of The Passion of the Christ. Stations Two through Nine are: 2) Jesus receives the cross; 3) he falls; 4) he meets his mother; 5) Simon of Cyrene takes the cross because Jesus has fallen; 6) Jesus' face is wiped by Veronica; 7) he falls again (usually he's depicted as carrying his cross again by this point); 8) he tells the women not to weep for him; 9) he falls a third time. But did any of that happen? According to the Gospels, most of it didn't.

This is a question of some importance for a film that claims Gospel authenticity.

Most scholars, of all persuasions, date Mark as the earliest Gospel, written circa 65-70CE. Gibson's film spends a long time depicting what Mark covers in three sentences: "Then they led him out to be crucified. A certain man from Cyrene, Simon, the father of Alexander and Rufus, was passing by on his way from the country, and they forced him to carry the cross. They brought Jesus to the place called Golgotha," (Mark 15:20-22, New International Version). In Mark, Simon is enlisted at the outset; Jesus never carries the cross and never falls; he speaks to no one; his mother isn't present. (The screaming crowds of Gibson's film are in no Gospel.)

Matthew, writing circa 75-85CE, agrees with Mark almost word for word: "Then they led him away to crucify him. As they were going out, they met a man from Cyrene, named Simon, and they forced him to carry the cross. They came to a place called Golgotha (which means the Place of the Skull)," (Matthew 27:31-33, NIV). Again: no Stations, no mother, no Gibson.

Luke (circa 80-90CE) adds more detail but is even more explicit that Jesus did not carry a cross: "As they led him away, they seized Simon from Cyrene, who was on his way in from the country, and put the cross on him and made him carry it behind Jesus. A large number of people followed him, including women who mourned and wailed for him." The Eighth Station comes from Luke: Jesus speaks to the women for four verses (they don't speak to or touch him), then a verse mentions two men who'll be crucified, then: "When they came to the place called the Skull, they crucified him," (Luke 23:26-33, NIV). The other Stations are absent, as is Jesus' mother. In Luke, the "large number of people" who follow are, except for some women, quiet.

Most scholars (again of all persuasions) agree that the Gospel of John was written last. They date it anywhere from 100 to 125CE – 70 years, perhaps even nearly a century, after Jesus was executed circa 30CE. John differs from the others in more ways than I have space to cite. Theologically and metaphysically, John is central in the faith of most Christians; historically he's the least useful, being farthest from the action. When Mark, Matthew, and Luke wrote, the Jesus movement was still largely Jewish; by John's time, it had become a separate religion, though the word "Christian" never appears in the Gospels. ("Christian" appears only three times in the New Testament: twice in Acts and once in 1 Peter – a strong indication that most New Testament writers considered themselves Jews, as did Paul, who proudly speaks of his Jewishness. In Acts 23:6, NIV, Paul addresses the Sadducees, the Temple priestly elite: "My brothers, I am a Pharisee, the son of a Pharisee." It's unlikely he'd have called them "brothers" if he thought they'd killed Jesus.) In any case, only in the less historically reliable John does Jesus carry his cross.

John makes a point of it, as though to push his version over the earlier Gospels: "Carrying his own cross, he went out to the place of the Skull (which in Aramaic is called Golgotha). Here they crucified him," (John 19:17-18, NIV). John never misses a chance to vilify "the Jews," as he called them, and surely if he knew of any scenes like Gibson's angry crowd he would have included them. In John, Jesus' mother is present at Golgotha; yet even in John, Stations Three through Nine are absent. There's no Simon of Cyrene, Jesus doesn't fall, etc.

In addition, Gibson shows Jewish priests and women in a Roman courtyard watching Jesus beaten, though no such scene appears in Mark, Matthew, or Luke, while John notes in 18:28-29 (NIV) that "to avoid ceremonial uncleanness the Jews did not enter the palace ... so Pilate came out to them." Again, Gibson goes against Scripture.

Newsweek said, "Gibson set out to stick to the Gospels." Clearly he hasn't. The pope is said to have said, on seeing Gibson's version, "It is as it was." Not according to the Gospels. Many historians feel that Mark, Matthew, and Luke are useful historically as long as one carefully sets them in a first-century context; many Christians feel that the Bible is impeccable, the word of God. Either way, according to the Gospels there is no basis for that passage of Gibson's film. Gibson has the right to believe, and make art of, whatever he likes; we all have the right to believe whatever serves us. But amidst the hullabaloo about this film, it's worth noting that this passage of The Passion of the Christ, and many others that I haven't space to cite, are the invention of Gibson or of other artists, mystics, and theologians, who lived long after Jesus. In fact, the Vatican-sanctioned Catholic Encyclopedia tells us that the Stations, as they now exist, were the invention of "16th-century devotional writers," 1,500 years after Jesus died. The Gospels, the prime and most reliable source, do not support much of the film.

Where Gibson is probably right is that the scourging of Jesus was vicious, extensive, and injurious – which is probably why Jesus couldn't (in three Gospels) carry his cross. That Jesus was badly weakened by his scourging is supported indirectly by Mark 15:44 (NIV) when describing the crucifixion: "Pilate was surprised to hear that he was already dead." Crucifixion was a Roman penalty reserved for rebels and seditionists. (The word for the two crucified with Jesus is usually translated as "thieves," but many Greek experts teach that its primary definition was "rebels.") Death by crucifixion was designed to take a long time; sometimes it took days. Thus Pilate's surprise that Jesus died (according to the Gospels) in six hours. Jesus likely died of internal bleeding from an unusually severe scourging. Which, I hasten to add, doesn't make his ordeal any the less terrible.

Where almost all historians agree that the Gospels are not only wrong but intentionally wrong is in their treatment of Romans in general and of Pilate especially. Every Roman with a speaking part comes off well in the Gospels, and Pilate is exonerated of ordering Jesus' execution. Gibson goes even further: The Temple priests and the Jewish crowd laugh at Pilate, and Pilate fears the priests will start a rebellion. This is nonsense. And this is why:

1) As first-century accounts prove, the Temple priests were under Pilate's direct orders. In fact, Judea's Roman governors even kept possession of the priests' most sacred vestments, without which Temple rituals could not be performed; the priests were granted those vestments when needed – if they behaved. 2) Romans crucified many thousands of Jews; no act or appearance of rebellion went unpunished. 3) When in 66-70CE the Jewish people finally revolted against both Rome and their own exploitative aristocracy, it was the Temple priests who tried to convince them not to – for which the priests were killed, by their own people. 4) Many historical sources of the era reveal Pilate to be an especially tough and feared governor – no crowd could afford to laugh at him. He'd executed many for less. In fact, Pilate was so brutal that even the emperor got sick of his ways and recalled him, accusing him of excessive violence. 5) The Gospel writers lived in a Roman world that was beginning to systematically persecute Christians; they intentionally placated the Romans, and were certainly not going to put anything in writing that could get them, or their converts, crucified. They had to blame somebody, so they blamed the Temple hierarchy. But Jesus was convicted of a political crime, as the sign on his cross said: claiming to be "king of the Jews." If he is king, then Herod and Rome are not. That's what they killed people for: questioning their authority.

Before Jesus ever reached Jerusalem he told his followers, "Anyone who does not take his cross and follow me is not worthy of me," (Matthew 10:38, NIV). In a world of everyday Roman crucifixion, everyone understood his metaphor: He was emphasizing the great risks that he and his people were taking. In that sense, he carried his cross with incredible courage. But that was a cross made of faith, not of wood. A cross of wood you carry, if you can, for a few steps; a cross of faith you carry all your life. In emphasizing the wood over the faith, The Passion of the Christ simply, and at great expense, misses the point. And ignores the Gospels.

The Passion of Christ, Mel Gibson, Gospels, Stations of the Cross