Meet the grill of your dreams at the New Braunfels Smoker Company. 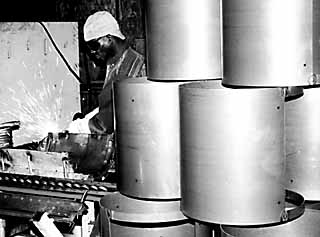 The New Braunfels Smoker Company didn't invent the backyard barbecue grill, they just perfected the manufacturing process. The factory in New Braunfels churns out 1,600 smokers and grills a day, feeding America's desire for food cooked over an open fire.

Few topics elicit the same amount of heated opinions from Texans than when they're talking about their favorite roadside barbecue joint or bragging about their own prowess with a smoker. One thing that most Texans will agree on is that grilling is not barbecuing. Grilling is fine for hamburgers and hot dogs, but slow-cooking big slabs of brisket or ribs over wood chips is true barbecuing.

In order to be labeled "barbecue," the meat should never see the fire. In a barbecue pit the fire is built in a separate box where the heat and smoke can gently caress the food and blend the subtle flavors over an extended period of time. Serious barbecuers have their alarm clocks set for the early morning hours to stoke the fire in the middle of the long process.

Ron Snider started the New Braunfels company in August 1989 with a blueprint, a prototype, and a booth at the national hardware store show. Up until then most backyard pits were built at local welding shops as a sideline. The Uvalde Lifetyme Products Company has been making pits and grills for a couple of decades, but only in limited quantities. The New Braunfels Smoker Company added mass production to the manufacturing process.

Oil field workers who converted 55-gallon drums probably made the first smokers, Snider says. The basic design hasn't varied much from the old smokehouses where a fire was built in a stone box next to the building where freshly butchered meats were hung.

Snider's first foray into smoker making was an old whiskey barrel with the ends cut off. Placing the barrel over a fire pit, he hung chains inside to hold the meats and then placed the top back on to seal the smoke inside. The fire was regulated by trenches dug around the bottom of the barrel to give the fire more or less air. "I swear you could taste the bourbon in those first turkeys I cooked in there," Snider says, "I got more raves from that smoker than any other I've ever used."

While he owned a playground equipment company in New Braunfels, Snider also sold the Uvalde smokers. Folks would stop in their Winnebagos and want to buy the big smokers to take home to Minnesota with them, Snider says. He got to thinking there must be a way to solve two problems with the locally built smokers -- how to make them small enough for folks to get them home and how to make them fast enough to meet the demand.

The first problem was solved by making the pit so it could be boxed and then assembled when it got home. The second conundrum was to automate the manufacturing process as much as possible. With an investment in heavy manufacturing equipment, the plant began producing as many as 100 pits a day. Much of the machinery had to be adapted from other uses. For instances, the welding machine that makes the seam at the end of the grill tank was originally designed to weld automotive drive shafts. Snider and his crew had to invent most of the equipment, much of which is still in use at the factory today.

Suddenly the Texas barbecue smoker became available to the mass markets. Wal-Mart was Snider's first customer at the hardware store show. Before then the common belief was that nobody would pay more than $99 for a wood-burning cooker.

"Ron Snider made the pit into a mass-market product," says Mark Davis, director of marketing and product development for W.C. Bradley. Bradley Leisure Products bought Snider out in 1997. The company also makes the CharBroil brand of grills and Oklahoma Joe's brand of spices and sauces.

The national company gave the New Braunfels Smoker Company the capital it needed to expand. Bradley operates the plant with 250 employees working two shifts plus two large warehouses in the New Braunfels area. They make 10 different families of smokers, grills, and propane cookers in assorted models.

The most popular smokers are still the ones with which Snider started the company and have changed very little over the years. The Hondo was the first model. It has an offset firebox for smoking, but the tube-shaped cooking area can be used as a grill. The most popular model is the larger Black Diamond. The company makes about 600 of these a day.

"If you ask a hundred guys what makes a good smoker you'll get a hundred different answers," Snider says with a laugh. For him the most important thing is how tight the smoker fits together. "That's how you control the burn," he says. A good smoker also has to be friendly to use. "If it's hard to clean, I'm not going to use it much."

Davis echoes Snider's comment on ease of cleaning. "You've got to be able to get the ashes out easily," he says. "That's what causes the rust." Davis, who works at the company's headquarters in Columbus, Ga., says a well-built smoker is important because the heavier gauge steel lasts longer and helps keep the temperature even. He also advises buyers to look for venting adjustments to control the fire and, of course, look for convenient features that make cooking more enjoyable.

Although it was designed by an Indiana native and is now produced by a company based in Georgia, the New Braunfels Smoker is still a distinctively Texan product. The factory does not offer tours, nor do they have a factory outlet store. The smokers are available at Wal-Mart, Sears, Academy sporting goods, and other dealers around the state, but don't hold that against them -- it means that good barbecuing is more accessible than ever before. That translates into more opportunities for a free backyard cookout.

Cannon Shoot at the Becker Vineyards