The State of Utopia 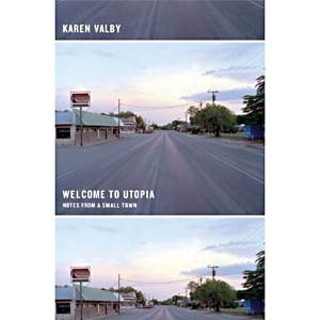 When Karen Valby set out for Utopia, Texas, her ambitions were modest. A reporter and blogger for Entertainment Weekly, Valby had been tasked with writing about a small American town, one relatively remote from the obsessive universe of popular culture. "I guess they just wanted to remind us, and themselves, that not everyone cares how much money Iron Man makes or what's on Perez Hilton or is even watching American Idol," she says.

"When I first got to Utopia, it was when Tom Cruise had just had a baby, and it was a big deal – well, it was a big deal where I work," she elaborates. "There was a woman at the cafe who told me, well, they just had a baby in town who came early and was a little underweight, and he had to stay in the hospital for a few weeks. That mattered more than whether or not Tom Cruise had some kid. I'm sure that's very obvious – of course it matters more – but you don't get wrapped up in pop culture minutiae there. Some of it is very valuable, and some of it is very entertaining, and I would never miss an episode of Glee, but, you know, it's not the real world."

Parked against a backdrop of some sort of mass playdate on the deck of a local coffee shop, Valby seems a little unsettled about the prospect of promoting Welcome to Utopia: Notes From a Small Town (Spiegel & Grau, $25), her first book and the surprising culmination of that initial article, written in a four-day "hit and run," as she calls it. This is her first interview about the book, and she's used to being the one asking the questions.

On the other hand, Valby, who moved with her husband from Brooklyn to Austin 2½ years ago, makes herself at home in unfamiliar situations. "At the magazine, I would always pitch stories I had no context for. I thought it was a very useful thing to not approach something as a fan – when you have your idea of what something or someone should be. I just went in so blind that all I was was curious. I had no prejudgments. I didn't need Utopia to be something it wasn't going to be. I was able to just hang around and just listen to people and to be in their lives and be engaged and interested."

In a genre that is itself loaded with expectations – small-town America has been mythologized, lampooned, and denigrated since pretty much the time the first settlement popped up, by everyone from Nathaniel Hawthorne to Alexis de Tocqueville to Buzz Bissinger – Valby chose the reportorial route, aiming for compassionate but straightforward dispatches. She spent four days in Utopia, and the resulting article contained the bones of her eventual book in that it painted a broad picture but homed in on a few people and groups: retired general store owner Ralph and the old-timers – all men – who gathered at an ungodly hour of the morning to drink coffee and chat at the store before it opened; Kathy Weikamp, a waitress whose boys are the definition of favorite sons in Utopia but for various reasons leave to seek their fortunes in the military; Kelli, an aspiring musician and the only African-American at the school; and Colter, an iconoclast in thrift-store garb who craves escape but has trouble leaving his cancer-stricken mother and taciturn rancher father.

Valby thought she had written "a very fair, emotion-filled story about this town," but upon returning to write the book, she found the town felt otherwise: "They were rightfully suspicious, and many people felt burned." By and large, she says, Utopians felt she had portrayed them as "a bunch of hicks," reducing the town to its worst traits. 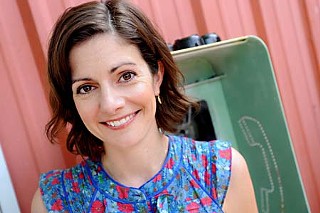 "They just thought I missed it, that I missed its heart," she explains, "and I concentrated on a few ne'er-do-wells, and why did I have to focus on the kid who likes punk music as opposed to the guy who plays fiddle at church?" Needless to say, re-entry was a rocky, if ultimately worthwhile, experience. "I think it was extraordinarily valuable to return and walk into a basketball game and have the conversation stop when I entered the room," says Valby. "I sat on a front bleacher by myself, and I knew everybody was like, 'She's back?' I had to start over, and they had a sense of what I had done already, so that was really hard. And really valuable."

One of the reasons – perhaps the main reason – for the frosty welcome is the matter-of-fact racism some of the town's denizens – in particular, some of the coffee drinkers – express in the article and that Valby captures further on the pages of Welcome to Utopia. Around Chapter 4, when the reader is already mired in Utopia's particular eccentricities and feeling affectionate toward its old geezers, frazzled cafe workers, and restless youth, Valby introduces us to the idea that this is a place where the N-word can be thrown around casually – especially by the old-timers – and where even some who normally vote for Democrats would not vote for Obama because he is black.

"Our conversations could get a little toxic during [the election]," says Valby, who learned during the writing of the book that she and her husband would be able to adopt a girl from Ethiopia. "It got really bad. They would always wind me up. I would always get outraged, but it was sort of like a routine. I wasn't there to change them, and they weren't going to change. I was there with a notepad and a recorder, and I didn't feel like it was my place to say, 'This is despicable, and you're an ignorant asshole.'

"But something about when we got on the adoption waiting list – when I told [the coffee drinkers], 'We're adopting a child, and we're adopting a black child,' [old-timer] Milton started saying things like, 'Kids in America need homes,' and I said, 'You're allowed to say congratulations, and that's all you're allowed to say.' We kinda moved on, and at the end, he pulled me down and said, 'I just wanna say you do what's best for you and your family, and you go with your heart, and who gives a damn what anyone else says, especially me.' I really felt like he stretched to extend that blessing, and I reached to accept it. This feels like a very small triumph, but I dare say that some of those guys tried to clean up their language a little bit. And maybe that's bad journalism because they were doing it for me or something. But I felt like it pushed them to be less careless with their words, at least in front of me. It meant an extraordinary deal, and it was as good as they could do, and I was grateful for their efforts.

"I think that they are in a classic sense very ignorant of the outside world and very oftentimes disinterested in the outside world," she says. "I don't think one encounters any less racism anywhere in America. I just think it's more subtle and more sophisticated."

Valby's ability to navigate such conversations – which were numerous – and emerge with a compassionate, complex portrait of a place and people in transition paints a picture of empathy and attachment that is less objective than the sort of magazine-style portrait she may have originally envisioned.

"Do I think I gave Utopia a pass?" she asks. "I do think it was very important to me to not reduce them to their worst moments. I don't think I tried to make them look good. I think that they are good. And they're really messy, too."

Going into the book, the New York native says, "my only expectation was that I'd feel enormously out of place much of the time. Stuff surprised me every moment. A thing that surprised me about small-town life is how much the generations drink together. If there's a party in Utopia, it's going to include 60-year-olds and it's going to include 18-year-olds. I'm surprised how surprising people found it that I'd never heard of mudding. I was surprised Perrier bought out the Utopia water business, that they found it so threatening that they felt they had to buy it out and shut it down. I was surprised that there's kindergarten cheerleaders – not for the peewee squad. It's for the varsity. I was surprised that it's so frowned upon for a guy to wear shorts. Like, it's pretty fucking hot – put some shorts on."