Science Fiction Gets the Vapors

"We're living in science fiction," people like to say.

They wave a hand at the array of laptop computers crowding shaky tables in a downtown coffeehouse; they nod toward a passing citizen with some telephone-ish gizmo clamped along an ear's fungiform cartilage; their fingers stroke the sides of a tomato genetically modified with the DNA of distant jellyfish; their LASIK-enhanced eyes track, in the night sky, the glimmer of a private spaceship plying its tourist trade against the vault, the vault, the vault of heaven.

Because we've been prepared for it for so many years. Because its coming has been heralded throughout our cultures since Homo sapiens learned to bind time and gaze beyond the moment. And the times change, and with those changes have always come new visions of the future. Only now, the problem is, our vigorous science and technologies have begun to advance at such a pace that what we're creating for ourselves is close to matching the most popular predictions of our recent history.

This makes further extrapolation more difficult, for one thing. Who can properly conjure a tomorrow that innovation might render obsolete before the light, perhaps bioluminescent, can dawn on that new day? Who can focus a sense of wonder on a realm that relentless industry has shattered into a fractal clusterfuck of shifting possibilities? Also, isn't everything going to hell around us? Aren't we headed, after all, for some final disaster – military, environmental, planetary, celestial – that our machines and ingenuity can't save us from and which makes the idea of any future highly unlikely at best? What the hell do we do with a situation like this?

We go, as the Firesign Theatre asserted in another context, forward into the past.

Deep into the past: to a simpler, more elegant time before ubiquitous electricity and the internal combustion engine warped a wider vulgarity into the tapestries of our lives. To a time before plastic, especially: Victorian, in a word. But – and here's the neat trick – in harking back (in fiction, in visual art, in fashion, and other modes of expression), we bring our favorite modern technologies with us.

Gentleman-tinkerers of the late 19th century inventing clockwork-driven automatons that would put Honda's ASIMO to shame; analytical engines, the bastard brainchildren of Charles Babbage and Ada Lovelace, performing computation beyond human reckoning; the more personal bits of today's polyvinyl-chloride technology now reconfigured in brass and wood and leather. Nothing virtual here: It's all hardware, machine culture you can pry apart and modify with elbow grease and scientific know-how. And, dash it all, don't those frock coats and goggles look simply smashing!

The writer K.W. Jeter suggested the term "steampunk" back in 1987 as a label for the sort of narrative created in his 1979 novel, Morlock Night – a sort of twisted sequel to H.G. Wells' The Time Machine – and in the fiction of Tim Powers, James P. Blaylock, and others. William Gibson and Bruce Sterling's 1990 novel, The Difference Engine, brought the nascent subgenre to a higher resolution and a much wider audience. Alan Moore and Kevin O'Neill's comic-book series The League of Extraordinary Gentlemen (which debuted in 1999 and shouldn't be confused with that abomination, the later, desecrating film) gathered the creations of steampunk inspirators – the aforementioned Wells, Jules Verne, et al. – into one magnificent and vividly depicted amalgam of romance and adventure. Katsuhiro Ôtomo's 2004 feature-length animé, Steamboy, fueled the engines of cultural saturation with swashbuckling period details and astonishing visuals. And now here's The New York Times, the Old Gray Lady with the New Digital Gown, covering the burgeoning steampunk style of DIY fashion and industrial design undertaken by the fiction's more talented acolytes.

If the future's already here and what may follow it is fraught with anxiety, of course we're retreating to the past. If the present seems uncertain and tawdry when compared with some abandoned Golden Age our forebears knew, why not take our favorite toys and go – if only metaphorically, via speculative fiction or material trappings – home again?

The steampunk abode in which we'll abide won't be bedecked by the likes of Ethan Allen or Karim Rashid but by ourselves, more likely, with a little tutelage from Sean Slattery (www.steampunkworkshop.com) or Richard R. Nagy (www.datamancer.net), and it'll boast a library of books like Jay Lake's Mainspring and China Miéville's Perdido Street Station and that recent themed anthology from Ann and Jeff VanderMeer, and we'll listen, while lounging in our taffeta gowns and riveted trousers and fingerless gloves, to Rasputina and the Decemberists and Vernian Process and, oh, probably anything featuring a homemade theremin.

"The street finds its own uses for technology," as William Gibson famously put it, glossing his cyberpunk opus, Neuromancer. In the case of steampunk, that street's likely paved with cobblestones and lined by brass-chased gas lamps, and those lamps glimmer in the dark, lighting the way toward the Temple of Exquisite Anachronism where the future is expertly retrofitted with the past, and the best of all possible times can provide a bright refuge from the worst of this world's fleeting present. 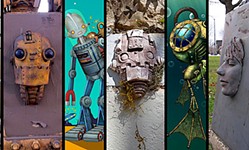 "The Impossible Winterbourne: AlphaBots" at Ao5 Gallery
I, for one, welcome our totes adorbs steampunk overlords

The Time Machine
This aerial adaptation of H.G. Wells is neat, and there's nothing wrong with that