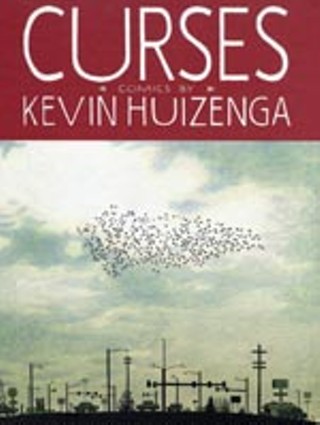 With a simple drawing style reminiscent of TinTin's Hergé, Kevin Huizenga uses the comics medium to brilliant effect. He wouldn't have to, considering the subtlety of his characterizations, the natural (but naturally weird) unfolding of his plots, the way a narrative often goes deep enough to be mostly interior: He could be just another pictureless writer exploring that intersection of the quiet suburban drama with the phantasms of magical realism, the sort whose name you'd see in the tonier literary journals, whose face you'd glimpse across the room at some publisher's soiree, and whose first book, although critically acclaimed, would sell poorly and be remaindered soon after its release. But that's not Huizenga. Huizenga has a mastery of scope and definition and renders his narratives, with impeccable rhythm, into sequential drawings, as well as words. Huizenga is the man who's given us Glenn Ganges, his major character, whose life (and the lives of those around him) is captured in the stories of Curses, the excellent new hardcover from Canada's Drawn & Quarterly. Witness ye the tale of a Victorian priest haunted by an animal spirit and how it relates to Ganges' own life; the incorporation of a dozen million starlings, an enchanted gas station, and a Sudanese folk tale into Ganges' search for a cure to his infertility; and, in the full-color "Jeepers Jacobs," the internal struggles of a theology professor who writes about hell and loves to golf. Witness also, as a treat for your design sense alone, the mirrorlike juxtaposition of roadways and tree branches in the two bottom panels of p.51, the nearly kinetic depiction of nighttime bike-riding on p.104-105, and the entire arc of "Case 0003128-24" with its unpopulated landscapes like those of the Ming Dynasty's Chen Zhou. Witness, hell: Buy this book of thoughtful, well-told stories for a friend. That way you, too, will be using the comics medium to brilliant effect.