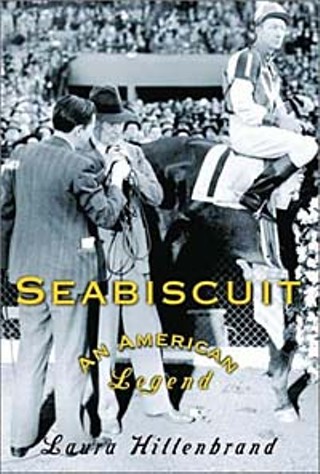 Once upon a time, one of America's biggest celebrities was a horse named Seabiscuit. In 1938 he got more news coverage than Roosevelt, Hitler, or Mussolini. Forty thousand fans would show up to watch him practice. On cross-country train trips, fans would line up to see him stretch his legs. His presence at a track meant that both track speed and crowd attendance records would be broken. Seabiscuit endorsed products from beer to ladies' hats. He was the bomb.

The Biscuit, as he was also known, had the misfortune of spending his early life in a barn that housed Granville, a Kentucky Derby contender who went on to win the 1936 Belmont Stakes, "the final jewel in the triple crown." No trainers had time for the overweight Seabiscuit. He was the son of the savage and fast Hard Tack, who terrorized grooms "without mercy; they feared and loathed him without reserve." (Seabiscuit was a synonym for the sailor's food Hard Tack was named for.) Seabiscuit inherited his father's speed, but luckily not his temper. He was small; he resembled a cow pony more than a lanky thoroughbred.

After Seabiscuit lost a race for an inconsequential $700 purse, unknown and laconic trainer Tom Smith stepped in. Smith convinced the wealthy Charles and Marcela Howard to buy the colt. Jockey Johnny "Red" Pollard, who was as down and out as Seabiscuit, signed on to ride him. In an improbable Cinderella story, the three men would collectively produce the finest racehorse in the United States. Tom Smith didn't like the press, didn't like to talk much, and had been brought up on the Western plains. The outgoing and effusive Howard was a former Calvary man who had made a fortune as the first Buick dealer to the West coast. Red Pollard was a jockey from an impoverished family who had been bedding down in empty stalls since hitting the racetrack circuit at 15. He had a reputation for being able to ride difficult horses.

For all of the magical properties of the story, the tale of Seabiscuit also illustrates the fight for workers' rights in the racing world. In the Twenties, when Pollard began racing, jockeys were expendable. Wearing none of the protective gear standard today (flak jacket, helmet, goggles), they often suffered horrific and fatal injuries, received poor medical care, and had no insurance. Hillenbrand details one critically injured jockey being moved by track officials to a saddle table, where he was left in agony for hours. The owners decided that it would be more convenient to have someone take the injured boy to the hospital after the races. The jockey soon died of his injuries. The jockeys also went to excessive and barbaric measures to keep their bodies severely underweight, a physical and psychological strain. In this brutal environment, any hint of unionizing among the jockeys was punished with immediate dismissal. The eventual founding of the Jockeys Guild in the late 1930s was a step in the right direction.

Hillenbrand's extensive academic research is documented in the back of the book, but what the reader sees is only a seamless narrative. This read is better than a day at the races.