Hello, suckers! The classic is back in its scandalous glory 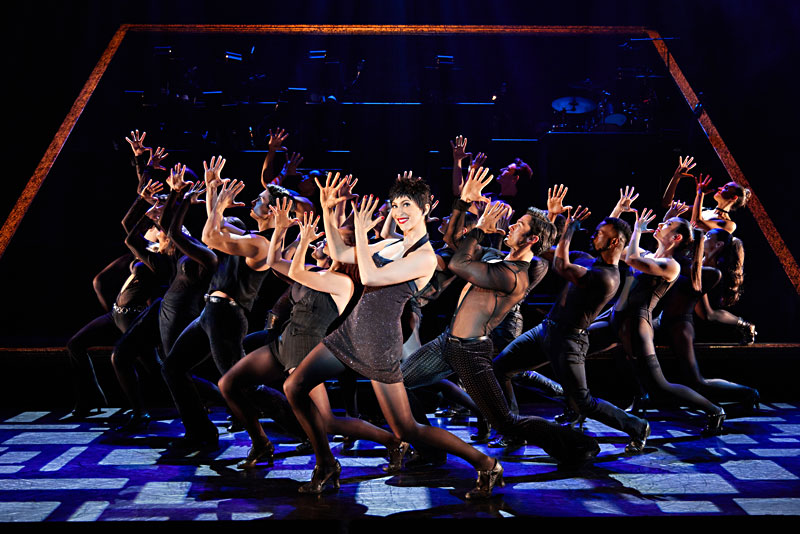 At the top of the second act of the touring Chicago, hoofer-turned-femme fatale Velma Kelly (Texas State University's own Logan Floyd) greets the audience with the salutation, "Hello, suckers!"

Suckers we are, but not just because we've paid full price for a non-Equity, streamlined staging of the revival of the original Broadway show. We're suckers because we've allowed ourselves to get so thoroughly lost in the decadent, razzle-dazzled, Jazz Age world of this Tony Award-winning musical, courtesy of John Kander's memorable music, Fred Ebb's clever lyrics, Ebb and Bob Fosse's engaging script (adapted from Maurine Dallas Watkins' 1926 play), and Ann Reinking's sensual choreography (based on Fosse's original work).

Being a sucker has long been a prerequisite for attending Chicago, considering that it has flown in the face of more conventional musicals since its premiere in 1975. It asks audiences for a huge suspension of disbelief as it creates this meta-theatrical portrait of 1920s Chicago, where every plot point becomes a vaudeville-style production number, every featured character stops to sing a character-defining song, and scenic design consists of a bare performance space in front of an onstage orchestra perched on elevated, tiered seating. And it requires us to raise our Fosse-hands in surrender to the genuinely unlikable people who populate this play.

The plot revolves around Roxie Hart (Katie Frieden), an aspiring chorus girl who murders her lover after he threatens to walk out on her. Desperate to avoid conviction, she attempts to win over the public; her pathetic husband, Amos (Brian Kalinowski); popular radio reporter Mary Sunshine (G.A. James); and the jury by hiring the suave criminal lawyer Billy Flynn (Jeff Brooks) to turn her crime into a barrage of sensational headlines that place fame and celebrity over truth and justice. Not fooled by her shenanigans are the brassy prison matron Mama Morton (Christina Wells) and fellow con artist and cellmate Velma Kelly (Floyd).

An Equity version of this touring musical came through Austin in 2013, with Seinfeld actor John O'Hurley playing Billy Flynn. This was at a time when the Broadway production brought in a revolving door of popular non-theatre types to play featured roles – Modern Family's Sofia Vergara as Mama Morton, R&B superstar Brandy as Roxie, and tabloid talk show host Jerry Springer as Billy Flynn, to name a few – in hopes of boosting ticket sales. The irony that this musical's satirical take on our love of pseudo-celebrities was capitalizing on our love of pseudo-celebrities was not lost on the producers.

The current tour, under Tania Nardini's direction and Jacob Kidder's musical direction, doesn't need stunt casting, and it doesn't require much effort to surrender to what is onstage. The triple-threat players' phenomenal performances, supported by a terrific 10-piece orchestra, keep the show fresh, sexy, and sophisticated. Meanwhile, the hard-bodied ensemble, dressed in all-black Victoria's Secret-inspired costuming, move with the remarkable precision and synchronization that have become this musical's trademarks. There isn't a dull moment or misstep, nothing that would snap us out of that sweet surrender to which we've so willingly succumbed. It's hard to call out highlights in an evening that is so exhaustively entertaining, but Frieden's convincing transition from naive, adulterous housewife to savvy diva, Wells' show-stopping rendition of Mama Morton's "When You're Good to Mama," and Kalinowski's endearing, self-effacing "Mr. Cellophane" would be among them.

Most remarkable of all is that everyone performs with boundless energy. In the three days prior to its arrival in Austin, the company performed consecutive shows in three different cities across three different states. But not so you'd notice.

The show concludes with Velma and Roxie singing "Nowadays," whose lyrics include: "It's good, isn't it/ Grand, isn't it/ Great, isn't it/ Swell, isn't it/ Fun, isn't it nowadays?" This musical and this touring production of it is all these things. 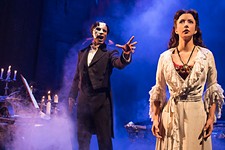 The Phantom of the Opera at Bass Concert Hall
This new touring production makes a grandly restaged, compelling tale of thin source material, with a chandelier drop that still thrills