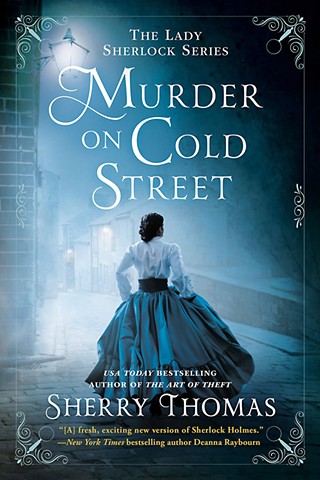 Two men found dead in an unoccupied home. A Scotland Yard inspector found literally red-handed at the scene of the crime. Sherry Thomas' fifth entry in the Lady Sherlock series, Murder on Cold Street, picks up exactly where its predecessor, The Art of Theft, left off and the crime at its core proves to be just as compelling as it seemed when teased as a cliffhanger in book four.

There were plenty of puzzles in Theft, but it was much more a heist novel than a mystery. Here, however, Charlotte Holmes (our heroine, a so-called fallen woman who presents herself as a detective assistant to her brilliant but, unfortunately, invalid brother, Sherlock, who, incidentally, does not actually exist) is working on a good old- fashioned whodunit with a Christmas Eve deadline: If she and her friends don't find a culprit for the titular double homicide other than her sometimes-ally Inspector Treadles by that date, he very well may hang. (Having watched the inspector spend significant time in the series wrestling with his own misogyny and now truly seeing his wife as an equal whose professional accomplishments are not a slight against his, we can't help but root for his exoneration and hard-earned marital happiness.)

In many ways, the delights of Murder on Cold Street derive from a sense of Thomas coming through on promises to her readers. Charlotte's love for sweets and extravagant frippery remains passionate and produces alternatingly mouth-watering and deeply amusing prose. (The opening description of a Christmas-themed redingote is one to treasure.) Charlotte's ingenuity continues to be celebrated without falling into the trap of the solitary, unknowable masculine genius. There's a lot of legwork involved in chasing down leads, and Charlotte, Mrs. Watson (patroness cum assistant to Charlotte, who's also a former actress and, therefore, scandalous), Miss Redmayne (Mrs. Watson's illegitimate daughter and an on-leave medical student), and Lord Ingram embrace collective effort with a refreshing lack of ego.

The slow burn romance between Charlotte and her childhood friend, the aforementioned Lord Ingram, is smoldering with new possibilities. With many obstacles in their path removed over the last few installments, they're faced for the first time with a real choice of whether or not to pursue a relationship. It's a decision that is given the same weight and suspense as any of the crimes Charlotte set out to solve, and it feels right in line with the compassionate ethos that runs throughout the series – after all, sorting out your feelings and allowing yourself to be truly vulnerable before another person when there are no longer external impediments in the way is brave and difficult work.

That love is the product of work, not fantasies or happy accidents, is a philosophy that has become a more and more apparent undergirding of the series. Thomas doesn't elide the gross inequities of 1890s London or suggest a history full of consistent, linear improvements in the lives of women, people of color, queer people, colonized people, and the poor, but neither is she fatalistic. In romances, friendships, and interactions between our heroes and various witnesses and suspects, we see again and again how authentic connections can only be forged when you acknowledge with clear eyes the advantages society has given you solely based on the circumstances of your birth. It's a philosophy that has the added benefit of being timeless. 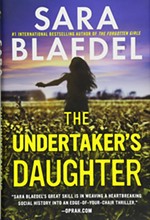 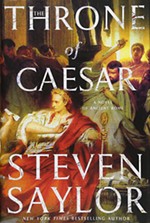