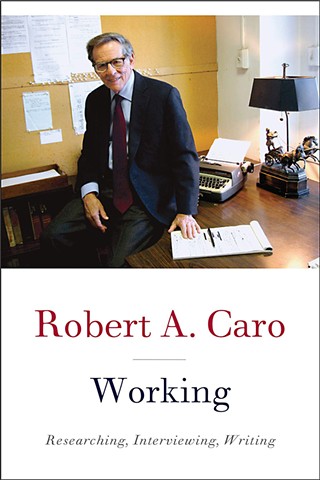 With the release of his 1974 book The Power Broker: Robert Moses and the Fall of New York, Robert A. Caro radically changed the nature of the contemporary political biography by electing to explore not only the life of his subject – the notorious developer whose vision of expressways, bridges, and parkways shaped modern New York – but also the evicted and scattered people affected by the slums and sprawl that emerged in the wake of Moses' plans.

In his sixth book, Working: Researching, Interviewing, Writing, Caro shares the methods and motivations he employs while writing biographies that are ever-centered on the nature of power in America.

Speaking of his approach regarding Moses, Caro writes: "I had set out to write about political power by writing about one man, keeping the focus, within the context of the times, on him. I now came to believe that the focus should be widened, to show not just the life of the wielder of power but the lives on whom, and for whom, it was wielded."

Caro's commitment to this task is exhaustive. While working on The Path to Power, the first volume in his Lyndon Johnson project, Caro spent three years doing research for a single chapter which dealt with the daily hardships of rural ranch women living in the Hill Country in a time before Johnson brought them electricity.

In the course of his multivolume The Years of Lyndon Johnson, Caro tracked down a dying man in a mobile home who helped the young statesman commit voter fraud in 1948, learned how Johnson's socialite mistress advised him on policy as well as French fashion, and coaxed LBJ's brother Sam to act out dinner table scenes that shed a terrible light on the daddy issues suffered by the former president.

In Working, we see the habits of a master who writes everything first in longhand, puts on a suit to sit down to type, and sticks to a thousand-words-a-day mandate. Caro, whose work has earned Pulitzer Prizes and National Book Awards, also sticks to his Newsday editor's early directive when researching to "turn every page. Never assume anything."

Nearly apologizing for a thoroughness that compelled him to sleep outdoors on a ranch near Johnson's childhood home and to phone LBJ's former schoolmates for clues to suppressed yearbook info, Caro writes: "In my defense: while I am aware that there is no Truth, no objective truth, no single truth, no truth simple or unsimple, either; no verity, eternal or otherwise; no Truth about anything, there are Facts; objective facts, discernible and verifiable. And the more facts you accumulate, the closer you come to whatever truth there is."