In this stage adaptation of Dostoevsky's novel, a fascinating glimpse into the more twisted corners of the human mind 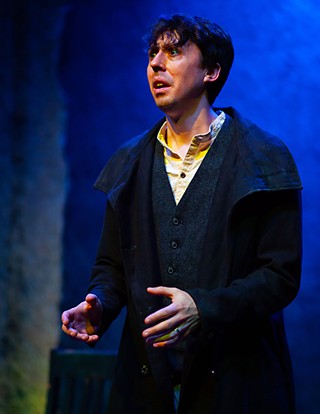 The popularity of true crime podcasts and documentaries has soared as of late. There's no single reason: escapism, a fascination with the darker corners of the human mind, artful storytelling on the part of producers. The great 19th-century Russian novels – you know, the ones that also serve as excellent doorstops – might not seem like they have much to do with the kind of true crime works now filling the market. But it turns out, Dostoevsky's Crime and Punishment hits all the same sweet spots.

Penfold Theatre has done us the great service of mounting a stage production of the 500-plus-page novel in a merciful 85 minutes, in a way that's efficient, balanced, and intellectually gripping. Using an adaptation by Marilyn Campbell and Curt Columbus, which admittedly cuts out all but the essential story, the show looks at how a delusional mind can devise the justification necessary to commit ghastly violence.

Raskolnikov (Ryan Crowder) is an educated man now living in arguably self-induced poverty, having quit trying to support himself. He survives off gifts from his mother's meager pension. He pawns the few gifts he has left from his dead father, and he grows more and more resentful of the old pawnbroker (Chelsea Manasseri) who stiffs him for every kopek she can.

Convinced that his is a superior mind not bound to the same morality as ordinary men and women and that he could do great work with the money he steals from the pawnbroker, Raskolnikov murders her with an axe.

Police Inspector Porfiry (Ben Wolfe) sees Raskolnikov's guilt from a mile away but lacks a confession. He engages with Raskolnikov in some of the most fascinating dialogue of the show. Earlier, Raskolnikov published an article in which he posits that extraordinary men should not be bound to ordinary moral standards, for they can achieve greatness for others many times with the results of their acts. Yet who is extraordinary? Typically, prison-room interviews fail on stage because the characters soon lose any motivation to keep talking to each other, but these two characters are perfect adversaries. Raskolnikov is unable to resist the intellectual chess game.

On the periphery is Sonia (also Manasseri), a religious young woman who has turned to prostitution to support her stepmother and her children. The character is a little thin by modern standards – the sweet young lady who rescues Raskolnikov's conscience – but this is a 19th-century novel here. If you grade on a curve, she's got all kinds of depth.

Under Jeremy Lee Cudd's direction, the production is smooth and intelligent. Crowder and Wolfe especially create fascinating, textured performances that are well worth the price of admission. They trust the intensity of their material to buoy their scenes. Without injecting any false urgency, they create a smart cat-and-mouse dynamic that serves the story well.

The production design is solid, especially Ia Ensterä's set design. The shape of the Ground Floor Theatre space is such that it's hard for sound not to get lost, and some dialogue is hard to catch. Those who struggle to hear should try to get a front-and-center seat, if possible.

Crime and Punishment dissects the sort of self-justification that permits a privileged man to resort to bloody crime. As with all true crime narratives, the edge cases of society are what hold all the interest, and Penfold's production is a well-executed venture into the more twisted corners of the human mind.

A version of this article appeared in print on April 5, 2019 with the headline: Murder, He Reasoned