Knock, knock. Who's there? Nora Helmer.

Henrik Ibsen's 1879 play A Doll's House ended with Nora Helmer walking out on her doting but stifling husband, three young children, and a bourgeois life to set into motion her epiphanous quest to forge an identity other than dutiful wife and mother. Audiences during Ibsen's day, who came to the theatre to avoid inconvenient social issues like "the women question" – now called feminism – found themselves shocked by Nora's 11th-hour act of self-actualization and the defiant door slam that came with it.

In Lucas Hnath's taut sequel, set 15 years after her departure, Nora is a brazenly independent and self-confident writer of feminist fiction working under a man's pseudonym à la Emily Jane Brontë's Ellis Bell. She has come home to get a divorce from her husband, Torvald, which would officially set her free from the binding ties she walked away from in the first place.

A Doll's House, Part 2, which premiered on Broadway in 2017, is imbued with contemporary language that cleverly connects the past with the present and contains just enough anachronistic f-bombs to taze modern audiences. It is also loaded with sardonic humor that goes well beyond the sober, 19th-century sensibilities of the source material. In fact, during its New York run, the laughs became the show's defining feature.

But in the hands of Hyde Park Theatre Artistic Director Ken Webster, whose 2015 production of Hnath's The Christians was one of the company's most popular, it's the play's human drama that takes center stage. Webster is comfortable riding the work's comic rhythms, but he uses them to set up the play's more serious and satisfying moments – the ones that explore, through dueling diatribes between Nora and the others, big-ticket issues like personal freedom vs. moral responsibility, attachment vs. solitude, and social conformity vs. individual growth – and to provide some relief after. The play is more interesting as a result.

So are the characters, starting with the longstanding housemaid. The slow-moving and perpetually pained Anne Marie is a sight gag that the dexterous Cyndi Williams embraces. But the actor also taps the emotional cost of her character's self-sacrifice in the aftermath of Nora's departure, which establishes a greater dimensionality from the get-go.

Sarah Chong Harmer as Emmy, Nora's now-grown daughter, is tasked with defending the conventional life her character has built for herself that flies in the face of Nora's personal paradigm. And yet her intriguing portrayal carefully captures the same qualities and characteristics that Katherine Catmull displays as Emmy's estranged mother.

Catmull's Nora stands resolute in her convictions and in defense of her act of abandonment. And yet, when reminded of the wreckage she left behind, we are able to see glimpses of vulnerability that – most remarkably – make Nora a sympathetic character. Catmull's acting is always interesting, and her intensity is riveting.

The same goes for Tom Green, who manages to turn Torvald, the model of antiquated morality, into – in his own words – "not so bad a guy, really." In fact, amidst all the confrontation and condescension, he reveals the character's soft underbelly, which turns his final moments with Nora into something quite beautiful. And when it comes time for Nora to exit for a final time, Torvald gently opens the door for her.

Make no mistake, Scenic Designer Mark Pickell has built a heavy wooden door begging to be slammed. It stands in the center of gray walls with only white crown molding and wainscoting for adornment. Cheryl Painter's wonderful late-Victorian costuming adds a touch of color, but here, too, things are muted. The sitting room contains only three gray chairs, which makes the door loom even larger.

But there is no slam, no punch line to the knock-knock joke introduced earlier. Not in this lovely production. 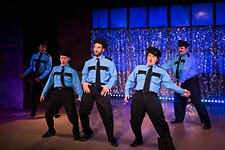