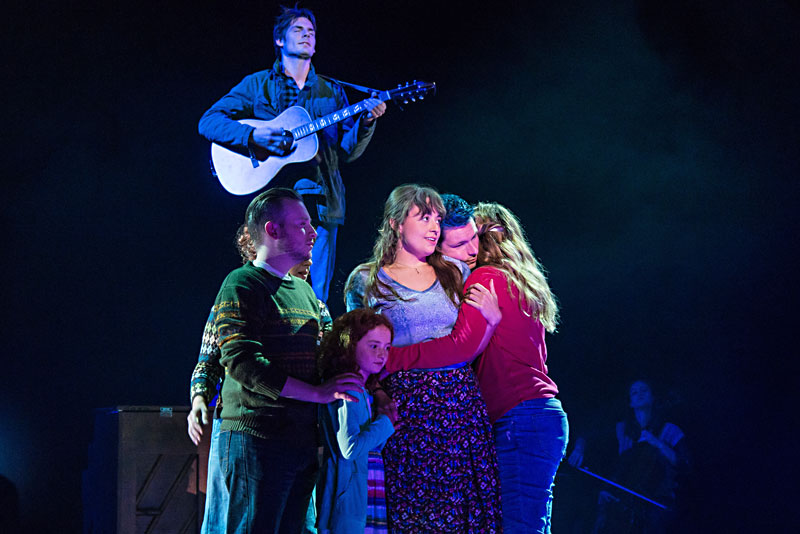 Maybe it's all the goings-on of 2018 casting a pall over every single thing we experience nowadays, but there's something about the musical Once that feels so earnest. An unnamed guy and a girl meet and bond over music. Their relationships are complex, and so are they. They create music in their brief time together that rises above anything they could be as a couple. It's very sweet.

Based on the 2007 film of the same name, Once opens with a guy playing guitar on the streets of Dublin and singing his heart out in what he intends to be his last time ever to perform. Except a girl hears him playing, and she insists on following him back to the shop where he works with his father. She sees the passion and skill in his music, and she won't let him quit.

Pause to observe that it seems like quite the fantasy for any struggling artistic dude, to have a pretty young woman appear out of nowhere and through dint of will rescue him from his discouraged feelings and inspire him to create his breakout work. Thank goodness in Once she actually gets something out of it, too.

Anyway, the girl, her fellow Czech flatmates, the owner of a struggling music store, and their banker form a band of misfit musicians who, after some bickering, manage to put down a few really amazing tracks in a recording studio. Which seems unlikely, except, hey, we're from Austin. It would be weird if your banker wasn't in a band.

If you can just manage to dismiss the raging cynicism that has by now taken the place of our collective limbic system, then Once is a gentle story (book by Enda Walsh) with an appropriately challenging conclusion. The music is the big attraction, with a score by Glen Hansard and Markéta Irglová. The cast is also the orchestra, and in Zach Theatre's production, their work is impressive. As the guy, Corbin Mayer's vocals feel not so much like typical musical theatre or the light folksy sound favored among male singer-songwriters today, instead taking on a throaty sound reminiscent of late Nineties crooners. Olivia Nice's hearty take on the girl's songs bring to mind Over the Rhine's Karin Bergquist as she pours her heart out over the piano.

Dave Steakley's direction is solid. It's a challenge to bring the intimacy of the exchanges between the guy and the girl from the screen to a large performance space like the Topfer, but Steakley does so, keeping the heart while raising the volume.

There are plenty of musical theatre aficionados who will object to any musical created by pop musicians who lack an extensive background in the form. It's true, the songs don't propel the story forward like they do in more conventional musicals, but that aside, the music is lovely, the story is sweet, and the performances are strong. It's all right to enjoy Once for what it is.