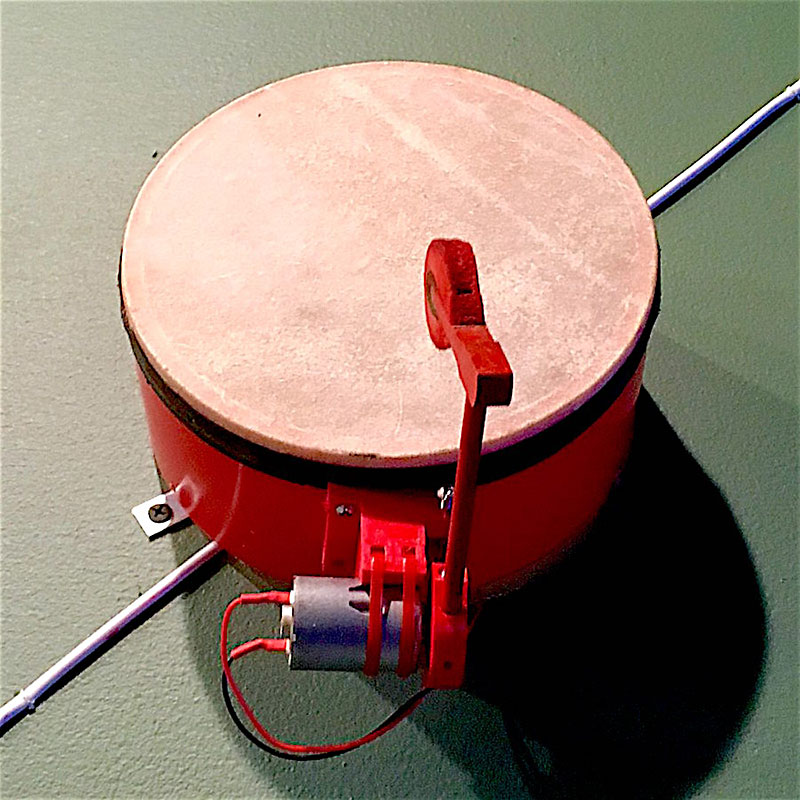 Part of me, your reviewer here, wants to just stand on a soapbox and loudly exhort you to go and experience – to see and hear and be delighted by – this marvelous Matthew Steinke exhibition for yourself.

I'd do that by describing the show, mostly, and maybe also by describing it in language that would signal, subtly or obviously, that I kind of know what I'm talking about with regard to this whole "art" thing that some people can really get their knickers in a twist about. With a little historical reference here, a strategic name-dropping there – nothing deep, just enough to establish potentially influential bona fides.

But, you know, that wouldn't be enough for some people who seek attention for creative endeavors. No, some people would feel slighted that the reviewer hasn't provided a thorough, heavily footnoted, academic explication of the work in question.

Like, it's not enough that the baby gets its goddamn binky, but the binky also needs to glow in the dark and taste like a mango lassi and be one of a limited edition of 50 designed by Philippe Starck.

Now, those paragraphs above. What are they? Are they an example of passive aggression? Especially as they have little to do with the exhibition or artist under consideration?

Yes, is the answer, probably so. And how human is that? Pretty damned human, I'd suggest, being a human. But also falling short of the area in which mental heath is problematic. And I suggest that as a human who, decades ago, the headshrinkers of the federal government diagnosed as so emotionally disturbed as to require expulsion from the United States Air Force.

"Deliriums" is a show in which three separate mechanical constructions have been designed and built to replicate, musically, presentations of human mental health aberrations. If we call those constructions "robots," as the gallery notes do, you'll think of something more humanoid than the programmed and beautiful mechanisms on display at Northern-Southern; so maybe just stick with "mechanisms." But if you're familiar with Steinke's devices, from having attended previous exhibitions and concerts featuring them, then you'll know to expect a couple of those aesthetically appealing, wood-and-metal, self-playing automata in the N-S space.

That those devices are as ingenious as ever is the first draw of this show: Always a pleasure, tyvm. That the sounds they're generating this time are based on the transmediation of human neuroses, or at least of particular mental states, is another. That there are actually three devices, and they're engaged in a sort of talk-it-out, round-robin therapy session, is yet another. But it's the second device, the one unlike the previous Steinke devices this reviewer's been accustomed to, that seals this you-totally-need-to-dig-this-awesome-shit deal.

The first device is near the N-S entrance, posed like a giant wooden model of a virus and tubing out a series of plaintive tones; the third device is around the corner, in the back, standing there and telling you what's up via a single brass horn. But the second device, oh man, that thing is like a complex radio schematic gone giant-sized and covering the entirety of the gallery's main wall, its long patterns of circuitry terminating not in LEDs but in tiny drums and rattles and so on – and all of it, when its turn to speak comes 'round, wonderfully alive with sound and motion.

This exhibition is like being inside some enormous tripartite music box that aliens have constructed to demonstrate, gently, a few twitchier aspects of human psychology. You enter the brightly facaded hole-in-the-wall called Northern-Southern, walk in from the oppressive heat that echoes off the asphalt and concrete, leave the typical bleak chaos along a city's grungy thoroughfare ... and suddenly you're in this creative oasis, this air-conditioned refuge of intentional visual and acoustic beauty and weirdness.

And assuming that telling you that – without going into some scholarly paroxysm of unpacking in the columns of a general-interest newsnode – will be enough to send you galleryward for your own delight? And that that accomplishment alone is, at least sometimes, sufficient?

Well, gosh, I know that might seem crazy. But here's my review, so call me maybe.