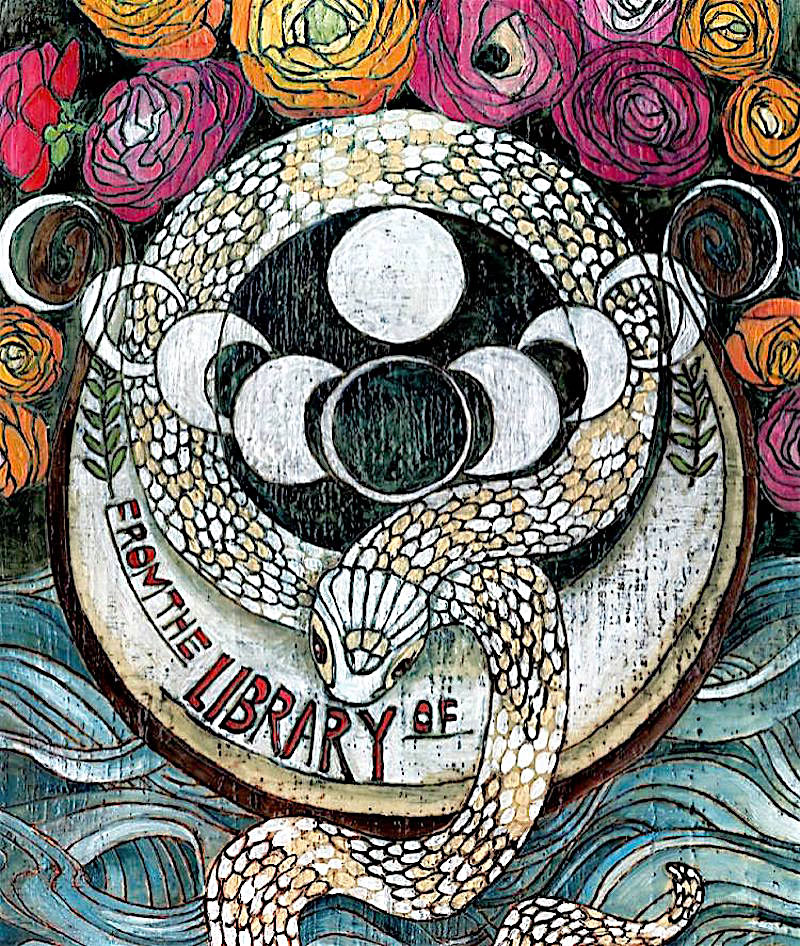 There could be an exhibition featuring bookplates in any visual arts venue and it would work just fine – if the selection were as diverse and interesting as this one at Recspec Gallery.

But since Recspec is also perennial host to a curated array of limited-edition prints and, more to the point here, artists' zines and vintage books ... since Recspec is all about hand-printed matter and old-school paper arts and such ... you kind of want to ask gallery owner Laurel Barickman, "Bookplates? Lady, what took you so long?"

Because, aside from its own merits, this "Ex Libris" show is a perfect match for the gallery.

Also, many of the pieces on display here are much larger than you might expect. That's because many of them are originals, or same-scale hand-reproductions of originals, and those originals are often two or three times larger than what they're eventually shrunk to for bookplating.

But about those merits. Gigi Grinstad's contribution to the show is gorgeously rendered in encaustic and oils, depicting a realistic snake curling itself around the phases of the moon, with flowers above and waves below, and everything in full vivid color. This is Benzaiten Bookplate, honoring the Japanese Buddhist goddess of (Wikipedia informs us) everything that flows: water, time, words, speech, eloquence, music, and by extension, knowledge.

The stark black-and-white brilliance of graphic wizard Bayo is evidenced by a fine-point inking of a ravening feline's head, its architecturally baroque tongue rampant and bearing an Ex Libris that looks as if the Latin's carved from stone: the kind of image that Marvel's Black Panther – especially if he was 1) Mexican and 2) a bibliophile – might have tattooed on his chest.

Jeffrey Primeaux brightens the show with polychrome acrylics on paper, painting up a pigeon pecking after some Ritz crackers, the inscription summing both the bird's thoughts and likely the reader's attitude toward the book this plate will be affixed to: Mine, Mine, Mine, Mine, Mine.

Cathy Rylander's Bookworms recalls some long-dead monk's illuminated and whimsical stylings. The text, framed with cartoons of a human skull and the larvae of what might be Xestobium rufovillosum, informing readers, "Whosoever stealeth this book ... let it change into a viper in your hands & rend you. Let bookworms gnaw your entrails."

An even more powerful threat against book theft is suggested with the monochrome linocut of De Pythonissam by Abi Daniel, depicting a woman in a simple black dress, in a standing position but calmly levitating off the dark ground, her dangling, sinister hand radiating some manner of eldritch puissance.

Laura Thoms' Observatory Idyll, a letterpressed bookplate depicting the McDonald Observatory she works at (and the deer and javelinas that are ever present in the area), is a friendly respite from such arcane conjurings.

Oh, there's so much bookplate goodness on the Recspec walls! And the form's history is represented by a small collection of actual antiquarian volumes with vintage bookplates affixed to them, as provided by Sheri Tornatore of South Congress Books. Bonus: Some of what's newly on display is also available here in multiples, as smaller and ready-to-adhere copies, just waiting for the right book to be attached to. (We'd recommend Shirley Jackson's We Have Always Lived in the Castle – especially for, wow, that Abi Daniel piece – but maybe that's just us.) 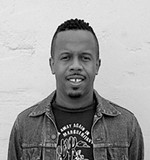