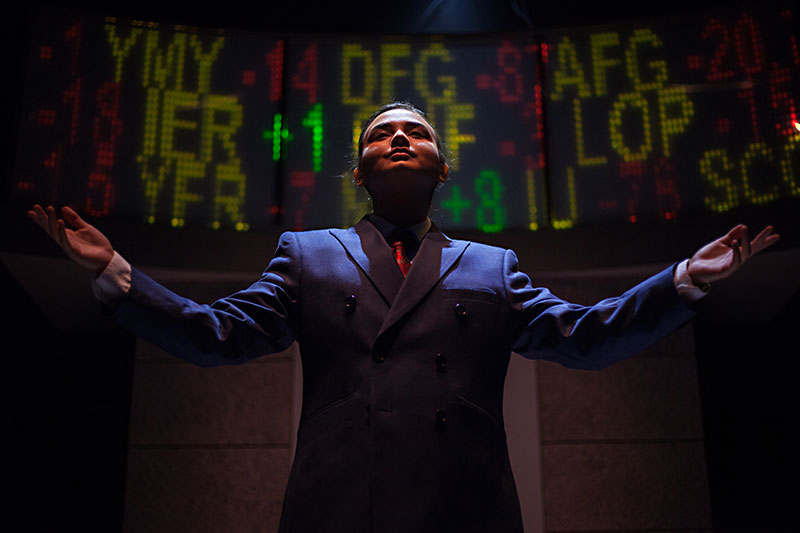 The rise and fall of Houston corporate monolith Enron was a stain on American business practices that ruined the lives of 20,000 employees and grifted billions of dollars from countless investors. It also serves as the current business model for quite a few companies in the U.S. It is a story people really should know. The University of Texas Department of Theatre & Dance not only does a bang-up job of presenting Lucy Prebble's entertaining and historically accurate script, but further reframes and modernizes the play with a cast composed of actors whose gender identities are either female or nonbinary.

So what happens to a story about "The Boys' Club" when there are no boys onstage? Well, for starters, the underlying threat of violence embedded in the culture of toxic masculinity (on which Enron – and business culture at large is built) is left by the wayside. It takes the air completely out of all the posturing, dry humping, name-calling, and middle finger displays, reducing them to the immature actions of out-of-control children, and rescues text that could easily slide into Mamet or LaBute territory with beautiful irony. In short, it makes a larger absurdity of an already absurd story, and, instead of making you tune out when the aggressive bro-down starts, UT's production of Enron draws you in, depicting big-business behavior at its most bro-fueled as exclusionary, selfish, and competitive, but seldom malicious. Like a mosh pit at a punk show, the men on the trading floor at Enron are just having fun while women, investors, power companies, and the state of California are pushed to the back.

Together with a committed cast of all-in actors and a dream team of designers, director Hannah Wolf successfully proves that reframing and commenting upon history can be as simple as switching out the storytellers. And these storytellers hit the mark again and again, starting with Cait Graham's costume design, which features everything from a three-legged suit worn by the Lehman Brothers to a rave-ready raptor outfit. Roxy Mojica's super-sleek set design provides defined multilevel playing spaces while still maintaining the elegant feel of a stylish boardroom (and is a very clever use of the Oscar G. Brockett Theatre to boot). Dramaturgs Christine Gwillim and Kara Mavers, together with projection designer Robert Mallin and sound designer Malyssa Quiles, will put you squarely back in the Nineties with the music and TV footage that some of us know only too well. And the whole show is peppered with Oluwaseun S. Olayiwola's infectious dance numbers and unexpected musical interludes, courtesy of equal parts Nineties Top 40 and genius composer Sam Lipman, who even works in an a cappella barbershop number.

Then there are the actors. The cast is as talented as it is large, and while every performance in Enron is worth seeing, Caroline Beagles' depiction of Andy Fastow as a wormy, wannabe big boy is as impressive as it is entertaining, as is Bella Medina's femme-fatale-on-steroids version of Claudia Roe. But first-year BFA student Kayla Johnson pulls off the biggest acting feat of the evening: Her version of Ken Lay is so charismatic and genuinely nice that you'll find yourself actually liking Ken Lay. She's that good, you guys.

In closing, a warning: While I highly recommend viewing UT's Enron, side effects are not limited to but may include: Capitalist Guilt, Excessive Smiling, An Urge to Smash the Gender Binary, Dino Envy, Toe Tapping, Generation X Anxiety, Intense Pride in Your Alma Mater, Spontaneous Girl Power, and Bitcoin Panic.

Oscar G. Brockett Theatre, 300 W. 23rd
www.jointhedrama.org
Through March 4
Running time: 2 hr., 20 min.
A version of this article appeared in print on March 2, 2018 with the headline: Taking Care of Bidness