Isaac Gomez's drama made us remember the lost women of Juárez 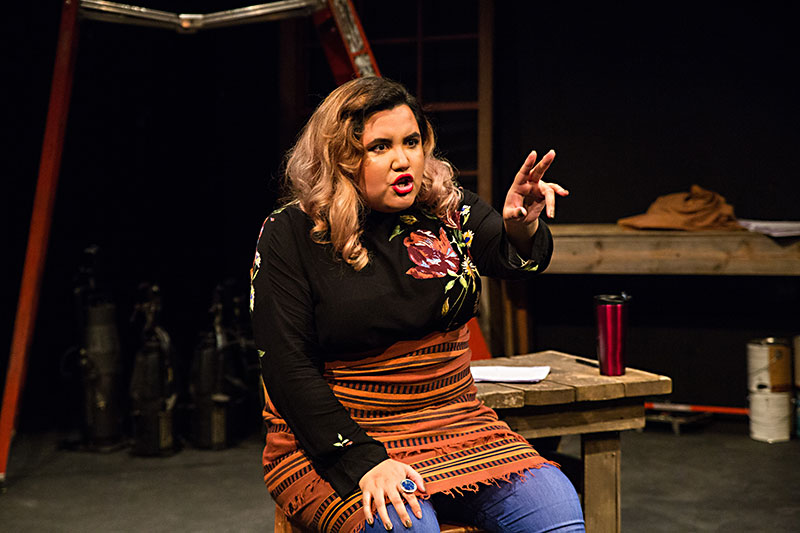 It was when the names were spoken that things got real. Up to that moment, everything happening in The Way She Spoke: A Docu-Mythologia felt contained within a fictional frame, that of an actor arriving at a darkened theatre to read a new play by someone she knows. Certain elements in the script traded on a correspondence with reality – the actor's references to the unseen playwright as "Isaac," the actual name of The Way She Spoke's author; the implied friendship between actor and playwright, which tracks with the show's one performer, Karen Rodriguez, and Isaac Gomez, who have known each other since they attended the University of Texas together several years ago; the play-within-the-play being about the women who have gone missing or been murdered in Ciudad Juárez, Mexico, over the last quarter-century, a subject that Gomez has written plays about before – but the material still felt fabricated to the point that its subject matter stayed at arm's length. The stories told about Juárez were horrific, but as long as the victims were referred to in numbers – how many kidnapped, how many killed – they remained distant, abstract statistics. Once we heard their names, though, their full humanity was thrust in our faces, and the tragedies of these women became intensely personal.

That seemed as true for Rodriguez inside the play as for those of us outside it. She breezed on in the classic high-social mode of actor types: buzzing, chatty, disarming in her effervescence. Then, having confessed to Isaac that she hadn't read his script beforehand, she tackled its early sections with the concentration of a performer trying to prove herself at an audition – an approach Rodriguez built on with an engaging sense of discovery as the play took her deeper into Juárez to learn about the abductions, assaults, and murders of women there. As the script represented Isaac's journey, she played him and the people he met along the way: ones who work in the maquilas, who describe the dangers for women riding the buses alone, who see hit men wander the streets with impunity, who hold out hope that their missing daughters will return. Those daughters are named, and with each name spoken, Rodriguez looked to be adding a stone around her neck, as if she had known them all and had to shoulder the burden of their memory.

In the end, the pain of inhabiting the victims, their loved ones, and – hardest of all – the perpetrators of these crimes, proved too much for the actor, and she lashed out at Isaac, accusing him of taking advantage of the tragedy and of her, forcing her to suffer through the torment of this story while he watches comfortably in the dark. It was a charge leveled in fire by Rodriguez, and her questioning of Isaac's right to tell this story and to force her to tell it carried moral weight. But though the finger was pointed squarely at the playwright (by himself, it's worth noting, as he wrote it), this was more than a private battle between a female actor and a male playwright. We were also sitting in the dark, consuming the tragedy of the Juárez women as an evening's entertainment. Do we have a responsibility in this story?

The question has lingered for me in the nights since I saw this intense and intensely provocative production. Any attempt at an answer feels like a justification, a response born of privilege and guilt. But I keep coming back to the names. At one point, Rodriguez handed fliers to members of the audience and on each one was a woman of Juárez who had disappeared. The one I was given was for Jessica Ivonne Padilla Cuéllar. I have since learned that she was 16 years old when she vanished on July 7, 2011. I know that she should not be forgotten, and I will work to guard her memory. What Isaac Gomez, Karen Rodriguez, and director Rudy Ramirez crafted at the Vortex made me want to guard the memory of all the lost women of Juárez.

The Way She Spoke: A Docu-Mythologia