In this staging of Tarell Alvin McCraney's drama, struggles with brotherhood and blackness play out against Yoruban ritual 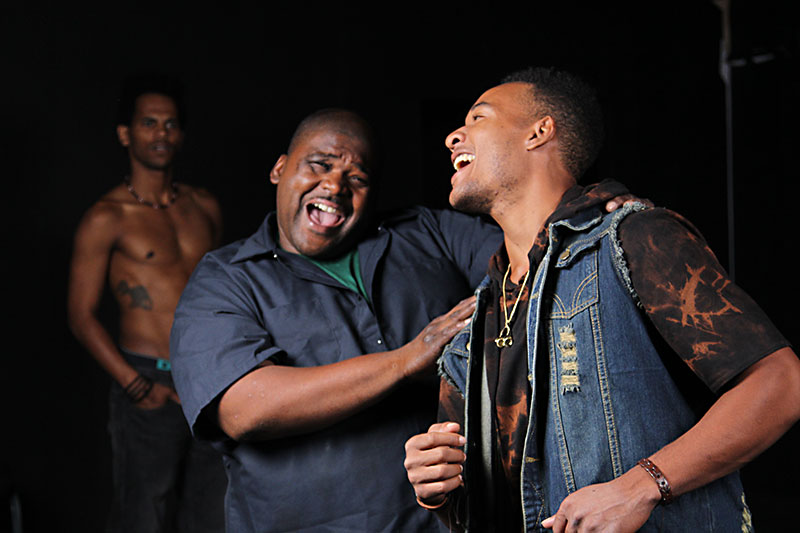 What is the nature of theatre and ritual? Is all theatre the ritual of storytelling? Aren't all rituals inherently theatrical in some way? One could make the case that professional sports are both theatrical and ritualistic, so is there really any difference?

All interesting questions. With Tarell Alvin McCraney's gorgeous The Brothers Size, though, we needn't ask; theatre and ritual become one in unique and compelling ­fashion.

Assistant director and dramaturg Crystal Bird Caviel clues us in early with a fascinating program note for this Capital T Theatre production, letting us know that McCraney (co-writer of the Academy Award-winning Moonlight) has woven elements of Yoruban spirituality into his play. Even the character's names reflect those of Yoruban spirit guides: Ogun the Warrior, Oshoosi the Hunter, and Elegba the Messenger. The layered and textured script seamlessly combines the lyrical rhythm and cadence of West African Yoruba rituals with modern theatre, as the actors integrate their own stage directions (to great and often hilarious effect) into their dialogue, honoring the Yoruban tradition of not losing oneself in performance, remembering that you are an actor telling a story.

And damn, can these three actors tell a story.

The Warrior and the Hunter face off on Mark Pickell's simple but exquisite set – a wooden floor with a bench and a box, set in the round at Hyde Park Theatre – as Natalie George's lights and Alyssa Dillard's sounds perfectly evoke the tones and temperatures of the Louisiana bayou, each time of day its own world. A stomping, call-and-response cacophony of word and sound occurs as the Messenger pours a ring of salt around the playing space – itself a ritual of cleansing and protection. From there, the story itself seems simple enough: Younger brother Oshoosi Size is recently free from jail, staying with older brother Ogun, a tough-love wielding auto mechanic. Ogun wants Oshoosi to put down roots, straighten out his life, get a job, and, most importantly, not go back to jail. Oshoosi is more concerned with flights of fancy and material and, ah, carnal desires. Elegba, Oshoosi's friend from lockup, drops by from time to time, hoping to keep Oshoosi's spirits up.

But there are deeper themes here. Examining the brothers' relationship, we find an empathy, compassion, and sensitivity that white America typically doesn't allow of black men in its entertainment – a notion that sets an undeserved and unfair precedent for what it means to be "black" in America. We see their struggles as black men in a white world, sure, but we also see the struggles of brotherhood, living up to the expectations of each other not only as brothers, but also as men. Also explored is the ... intimate brotherhood developed between Elegba and Oshoosi in prison, touched on just enough convey how heightened the taboo is for these characters.

Sean Christopher's Oshoosi is torn between who he should be, who he thinks he should be, and who he wants to be. It's a fully realized balance that the actor pulls off admirably and authentically. As Elegba, Delanté Keys embodies a nervous confidence, almost mischievous in his machinations – which makes sense, as Elegba is also the Yoruban "trickster." John Christopher's Ogun is the soul of the production; his performance so full of pain and fire, so committed and commanding that it's hard to take your eyes off him, even when he's not speaking.

The level of trust between the ensemble and director Jason Phelps, a white man directing a black story, is evident in the performances. It's clear that Phelps knows when to lead and when to learn. The Brothers Size asks much of its audience, who will likely find a resonant, challenging piece of ritualistic theatre peppered with song and dance, more than worthy of reflection.