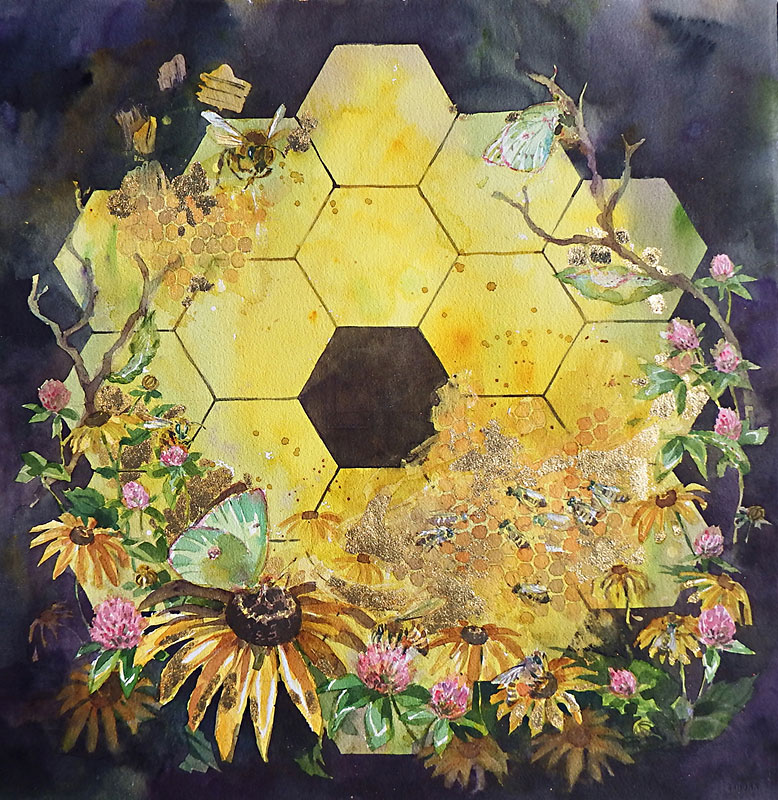 
This summer I had the opportunity to visit the McDonald Observatory in far West Texas. The observatory features two massive telescopes on top of a hill, typically reserved by astronomers for intensive research. In addition to these telescopes, the observatory offers viewing options for the general public. These include the Star Party, a late-night tour through the cosmos. The crowd gathers in a nearly pitch-black circular seating area and follows along as a guide with a laser pointer explains the celestial objects above. We were lucky to be there on a clear night. I have never seen such a sky.

Much of the presentation is made up of narratives about the various stars and planets. These include tales of discovery, awe-inspiring descriptions of galaxy clusters, and asides about passing satellites. "Far Out," a collection of work by artists invited to create in the presence of the James Webb Space Telescope, also tells stories. In her poem, titled after the telescope, Hannah Larrabee writes: "13.8 billion years and for what, for us to stop asking questions? To no longer draw a thread between stories? Like you, I have fallen asleep in the fields under a blanket of stars. Like you, something in me grows restless. Honeycomb. Black-eyed Susan. These are not the right words to describe it." Larrabee describes the challenge of grasping a complex universe, attempting to identify patterns and meaning in a seemingly scattered arrangement. It is the mission of her poem, but it is also the mission of the telescope. She uses metaphors and music; the telescope uses light and mathematics. Each has its limitations, but there is beauty and awe in their striving.

It is poignant (and fun) to see attempts by such disparate artists to grasp the physicality of the telescope while also weaving in its more intangible cosmic significance. Prominent throughout the show are the telescope's distinctive golden mirrors laid out in a hexagonal grid. Laddie Scott Odom's To L2 is a "flight ready" kite with the telescope painted on its surface, the golden grid glowing like an eye at its center. In her set of comics, "What I Can See," Veronica Guzzardi uses the grid to shape her panels. Erin Barry-Dutro's triptych, Visions I, II, III, delivers portraits of scientists Amber Straughn and Larkin Carey, as well as a mystical interpretation of the telescope, all of which use the golden hexagons as a motif.

Coupled with the artists' unique perspectives the golden mirrors resonate deeply, perhaps nowhere more so than in Joanna Barnum's watercolor series, Extended Metaphor I-VI. The images are only 6" x 6" making them easiest to absorb from up close. They are microscopic visions, each squinting in on its own portion of the golden grid, surrounded by flowers and insects. In one, pink blossoms and green vines swarm while a pale butterfly rests on a nearby flower. In another, minuscule golden cells have multiplied from the larger, central hexagon, forming a honeycomb crawling with fat bees, one of which flies head-on at the viewer. Barnum's loose brushstrokes and attention to detail make the images feel like folk tales. She brings the space telescope back to Earth, transforming it into something quaint and intimate without sacrificing the broader implications of its power. "As human beings," Larrabee writes in the statement accompanying her poem, "there is the necessity of storytelling to conceptualize our universe. There is also the necessity to link stories like filaments." Her words could apply to Barnum's series as well, to the show as a whole, and to the telescope itself.

A version of this article appeared in print on July 21, 2017 with the headline: "Far Out"