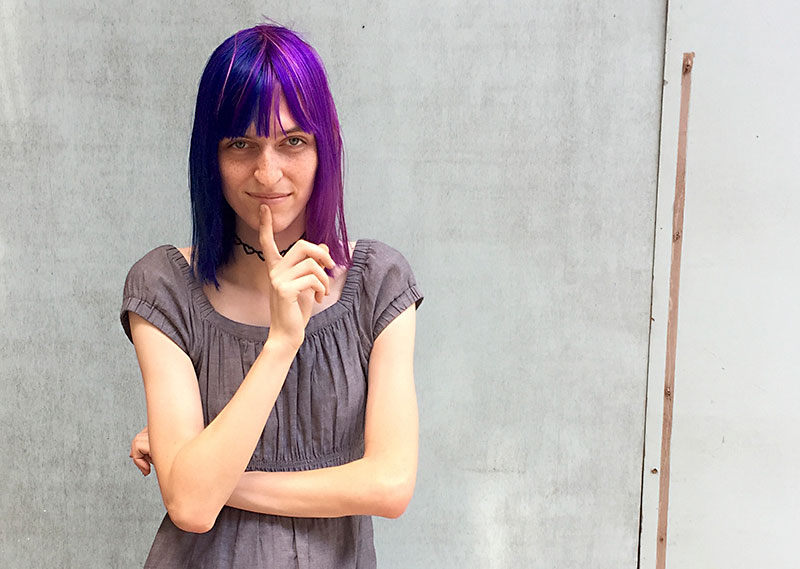 A single eye – angular and unblinking – stares down, offering words of discouragement. "You have a choice here with how you present yourself, and you should make the mature and responsible one," it says, ensuring your path to self-discovery is that much more tortuous.

The eye is part of Jennifer Raye's interactive art installation, Boa Retina, and her first with a content warning: "Transphobia and emotional/physical abuse." Don't let the disembodied eye make you think the game is an entirely impressionistic telling of a universal coming-out story. Raye clarifies, "I didn't want to just make a game about being trans, but about my experience being trans." It's an experience the eye would like to deny you while navigating Boa Retina, and an experience she admits "was not very nice all the time."

Creating the game itself has taken an emotional toll as well. After a showing of an early version of Boa Retina, the often shy Raye tweeted: "I feel like I barely exist right now." Conversely, her oft-updated Twitter bio contradicts the notion that she is just a shrinking violet, describing her as an "Idealistic Magical Girl Out of Spite." In the end, Raye's complex outlook lives in the game that she agrees is "relatively dark." The contrast to her previous work – which includes an interactive Claymation tale and surreal digital playground – is striking. "I'm not sure I want to make something this dark again," she admits. "At least for a while."

Raye credits the Austin game development and trans communities and the denizens that live in the overlap of that Venn diagram for giving her the support to make such a personal work. In a more concrete show of support, Boa Retina is the byproduct of Raye's participation in the Arcade of Anything residency program sponsored by Juegos Rancheros, Austin's local indie games collective and nonprofit.

Boa Retina is uniquely multimedia while remaining rooted in the digital world. It uses a variety of tech and interfaces to engage the viewer. Everything from a current PC setup to an Atari 2600 running Raye's own creation offers insight into the floating eye's motivations. Other dated tech includes a monochrome handheld PC and a PDA. (Remember the brief period when that acronym didn't solely mean "public displays of affection"?) Raye explains her use of an Atari – a system that predates her by more than a few years – "In middle school and high school, I had nothing better to do with my time, and I just like digging through old stuff like that."

All of the varied components are used to convince the wary eye of an increasingly obvious truth. "You're basically trying to prove that you're trans," Raye says with a gentle laugh that one wishes the eye could see.

A digital version of Boa Retina is scheduled to be released June 30.

Arcade of Anything Presents: Boa Retina

Sun., June 18, 7-11pm
Museum of Human Achievement, Springdale & Lyons
A version of this article appeared in print on June 16, 2017 with the headline: What the Eye Doesn’t See