With two major solo shows and a new documentary about him, the Austin collage artist readies to be seen in a new way 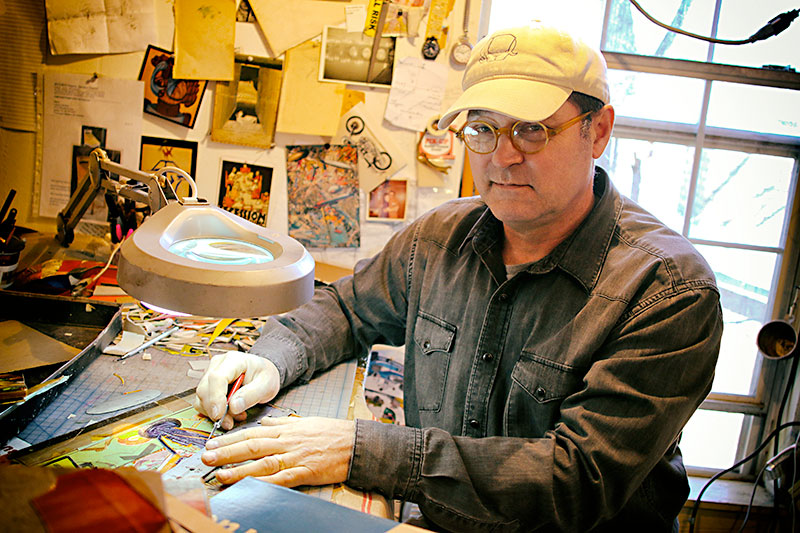 At work in his kaleidoscopically colorful home studio in Central Austin, artist Lance Letscher is reserved, precise, and unflaggingly polite. He isn't given to boasting about his projects, elaborate found-material collages and sculptures, although many of his pieces are housed in permanent collections at museums around the world. Letscher swats off the praise he gets at exhibitions of his work as if compliments were gnats. "I have been called a genius three times. Each of the three times, the person was so slobberingly drunk, it was embarrassing. They were putting their hands on my chest, saying 'You're such a genius!' That comment is so far afield. I have an IQ that hovers between 69 and 123, and that is kindly," he jokes.

Letscher has lived and worked in the city for most of his life, including a tenure as a graduate student at the University of Texas in the Eighties. After dabbling in the classical practices of drawing and painting, he began putting loose paper, bits of metal, and other miscellanea into colorful assemblages. Letscher eventually took his practice full-time in the early 2000s, a period when he might be exhibiting at three major galleries in Austin simultaneously. It nonetheless remained a challenge for Letscher to live comfortably in this ever-more-expensive city, despite his works' acceptances into the Blanton Museum of Art, the Austin Museum of Art (now the Contemporary Austin), and the Museum of Fine Arts, Houston, among others.

Adair’s film captures Letscher at the beginning of a hunt for colorful metal discards. he then proceeds to slice, mold, bend, tear, and staple thousands of them together into a large symmetrical eye – a sort of colossal steampunk Sauron.

Now, with a new documentary about his life's work, The Secret Life of Lance Letscher, having its premiere at South by Southwest this month, as well as contemporaneous solo shows at the Stephen L. Clark Gallery in Austin and the Tayloe Piggott Gallery in Jackson Hole, Wyo., this visionary is cautiously priming himself for his entrée into mainstream visibility. Letscher has adjusted an already prolific output to compensate for what may soon be overabundant attention: "I've been working exceptionally hard lately, making a lot of work and putting a lot more energy into it than usual." Of this major moment in his 30-year career, he says, "Sometimes you really have to hustle. I recognize this as one of those times."

It is a challenge to picture this workhorse, whose hypnotic collages often require him to dig through hundreds of pounds of discarded materials for a single visual morsel, increasing his activity by a scintilla. His hyperkinetic installations have always required of him an exacting, sometimes obsessive focus. "I do not allow myself to stop working until there is something in a piece that validates its existence," he says. "Sometimes it takes a long time – a piece will come back from a gallery where it's been since 2006, so I'll take it and begin to work on it more." But the last few years have seen an undeniable evolution in the thematic and aesthetic essences of his compositions. In addition to "letting up" on the heavy, radiating spirals which are known as one of his signatures, his newest material contains "an upbeat energy that [my work] didn't have before."

Between the "New Work From the Late Middle Ages" exhibition in town and the luminous "Untroubled Mind" show in Wyoming, Letscher has handcrafted more than 35 of these "brighter" and "more upbeat" works in a matter of months. These include a gigantic metal hand stapled to a wood board, a motorcycle helmet (one of Letscher's favorite objects) covered in medieval religious imagery, and several miniatures featuring mesmeric optical illusions. He notes of these pieces, "the way the color interacts, and the way the sense of space is created, has gotten stronger. ... There is not as much of a psychological pressure inside of these."

For Letscher, the change from his usual "dark, oppressive" palette to "work that is more inviting" was a "fantastic and exciting" outgrowth of a rejiggered lifestyle. "The funny thing is," Letscher says of his earlier pieces, "when I was doing that work, I really liked it. I don't want to say that I don't have failures, but I had positive response in general to my work, and I didn't ever really stop." In fact, several of his most acclaimed works from these morose periods made their way into Lance Letscher: Collage, a sleek full-length monograph put out by University of Texas Press to unequivocal adoration in 2009. Cindy Widner, in her review for The Austin Chronicle, described it as "pure pleasure." Until recently, it was the definitive collection of Letscher's work. 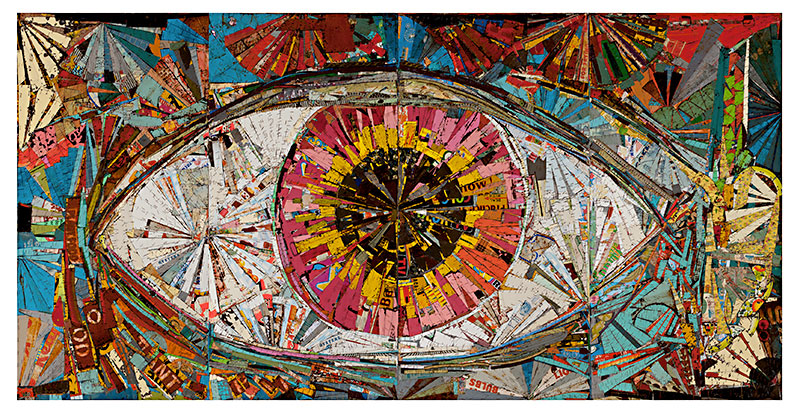 That will change, though, with The Secret Life of Lance Letscher, which paints a more intimate and comprehensive portrait of the artist than has ever been seen in public. Ensconced within the 95-minute film's narrative are a series of testimonials to Letscher's visual and personal growth in recent years. Over several months of shooting, director Sandra Adair (the Academy Award-nominated editor and producer best known for her ongoing collaboration with Richard Linklater) traces the collagist's "methodical" development of a mural commissioned for Austin's South Congress Books. With cinematography by Jason Gamble Harter, Adair captures Letscher at the beginning of a hunt for colorful metal discards. He then proceeds to slice, mold, bend, tear, and staple thousands of pieces together into a large symmetrical eye – a sort of colossal steampunk Sauron. Letscher's process here is laborious, intimidating, and enviable for artists in any field.

Adair, who chose Letscher as the subject of her long-anticipated directorial debut, wrote in a statement: "When I was introduced to the quiet buzz surrounding Austin artist Lance Letscher's upcoming public art installation on South Congress Avenue, I immediately recognized the remarkable opportunity to capture a unique artist's story at a pivotal moment in Austin's history." Yet she was surprised to discover that Letscher – a man often characterized as "reticent" and "reclusive" – actually "had an incredibly moving personal journey" that contained deep "memories of trauma and triumph." Her intent to make a meditation on creative process then grew into a multifaceted exploration of Letscher's extraordinary brain, the city he works in, and the nature of genius. Instead of skimming the surface of Letscher's art, the film became "much more than documenting the mural being made. It allows viewers an experiential look inside" an artist's mind.

The footage resulting from this change, some of it shot to mesmeric effect on a GoPro by the artist himself, "provides a doorway into Letscher's profound insights on creativity, the subconscious, work ethic, and spirituality." Through her editing, Adair creates active conceptual links between Letscher's visual obsessions – biplanes, children's cartoons, Walt Disney fireplaces – and his evolving inner state. Mercifully, the film never overextends its artistic analysis or its welcome, instead becoming an affectionate study of a quietly haunted man. Both picturesque entertainment and demanding drama, it is a doozy of a first feature.

Letscher, who has seen the finished movie, admires its craft and considers the filmmakers' portrayal of his life to be an honor. Asked if he'd ever expected to be the star of a nonfiction feature, he says with a laugh, "It is a really dissociative experience – not to the point of psychosis or anything, but it feels very strongly like this is happening to somebody else." Although he "would like for Sandra's film to be successful," widespread approval "is not really part of my agenda. It is not a goal of mine to achieve public recognition." All he has ever wanted is the fiscal and personal freedom "to do my work."

Whether intended or not, the South Congress Books eye has already become a must-see landmark in the city for selfie-snappers, on the scale of the "I Love You So Much" and Jeremiah the Innocent murals. Its placement on the bookstore's facade represents an investment in public, DIY art that could not come at a better time for a city undergoing never-ending expansion and aesthetic generalization. Should the documentary and new solo exhibitions be successful, the mural may push Letscher over the brink of local celebrity and into heavy demand. He comments drily that he "is wishing hard for that" after years of dedicated striving to support his family. (Letscher is married and has several dogs.) On the other hand, he's learned to appreciate it when "some good comes of something" these days.

When we speak, he is excited to attend the SXSW premiere with the film's local crew, including Adair, producer Kristi Frazier, and Austin musical legend Graham Reynolds, who composed the soundtrack. In preparation for the Festival and for whatever consequences it may have for his quiet private life, Letscher consulted Daniel Perlaky, a filmmaker and multimedia artist. He recalls Perlaky, whose experiences at Broad Green Pictures and Tugg Inc. suggest an intimate relationship with the film business, as having said, "It's going to be a ripple effect." For the moment, though, Letscher just focuses on making art and not worrying about ripples: "I don't know what's going to happen to me, but I don't want to leave behind all these mediocre pieces. If, 75 years after I die, somebody wants to write a book or my work becomes valuable somehow, I want it to be strong."

A version of this article appeared in print on March 3, 2017 with the headline: Eye Wide Open